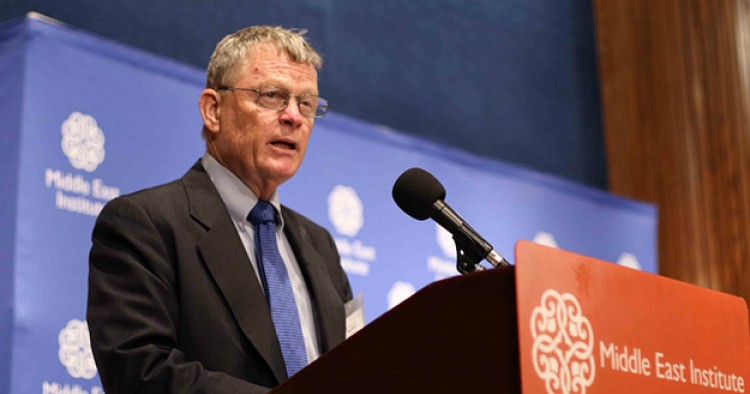 Thank you. It’s a pleasure to be here to open this important event.

And then I remembered the Somali terrorist threat scare on Barack Obama’s inauguration day in 2009. The national security transition team was briefed on the members of the Somali-American community who had gone to Somalia to fight the Ethiopians but who were being radicalized by al-Qa‘ida. Concerns were raised that they might return with their military skills to conduct terrorist acts. That was my first serious introduction to having to deal with domestic violent extremism in the post-9/11 era.

Terrorism has been a political weapon for a long time and has been practiced by many different groups. It is not the exclusive property of any national, religious, ethnic, or ideological group. An anarchist terrorist assassinated President William McKinley in 1901. But in the twenty-first century the events of 9/11, the recent Charlie Hebdo massacre, and the massive flow of foreign fighters to Syria and now Iraq have for many come to define the problem, despite the horror of such attacks as Anders Breivik’s politically motivated mass murder on Utoya Island in Norway.

Today I would like to sketch some ideas for countering violent extremism. These ideas may also help in dealing with other forms of mass violence like Adam Lanza at Sandy Hook Elementary School or the Virginia Tech shooter Seung-Hui Cho, given some similarity in pre-violence behavior patterns.

Domestically, the FBI and local law enforcement have shouldered much of the prevention burden against violent extremism and have a solid record of using intelligence and law enforcement investigative techniques to prevent a number of such acts. Their continued effort is essential.

But just as drug enforcement agents acknowledge that law enforcement is only a partial solution and that a more holistic strategy, involving demand reduction and public awareness efforts, is needed to combat drug trafficking, so the law enforcement counterterrorism effort needs to be part of a much broader community effort that seeks to identify violence-prone individuals before violence occurs and provides intervention options to redirect those individuals into socially productive endeavors.

Pie in the sky, romantic naiveté? The president of the United States and the organizers of this February’s White House Summit on Countering Violent Extremism from Lisa Monaco on down didn’t think so. And as in the drug crime context, the paradigm is shifting and Washington and many governments around the globe are moving to a model that prioritizes a different sort of prevention and intervention—ahead of possible law enforcement investigations and arrests.

The heart of the effort, based on existing social science research, begins from the basic assumption that individuals headed toward radicalization and violent extremism generally exhibit behavior that foreshadows their inclination—self isolation, interest in violence and violent games, strongly held grievances. The list of social science-developed behavioral indicators and underlying factors is much longer and remains an area for further investigation. And it is important also to remember that the exhibition of such behavior does not automatically portend a path to violent or terrorist acts. But this point is still valid and leads to the second core assumption that this behavior is observable by others: family, peers, and authority figures like teachers or medical, especially mental health, professionals, or religious figures. Reporting on the Boston Marathon attack bears this out. Family, friends, and religious leaders observed troubling behavioral indicators by one or both of the brothers before the event.

From that starting point, how does society mobilize those observers to connect with institutions that can intervene and redirect or prevent. And that leads to the central element of a national strategy. Pre-violence observation, identification, and intervention are most likely to occur at the community level, and that is where society needs to focus the heart of its effort.

To that end, there are four pilot-like programs I would like to mention: Los Angeles, Minneapolis-St. Paul, Boston, and Montgomery County, Maryland. Each of these efforts combines local government and police with community NGOs, faith-based groups, academic institutions, and community medical and social services in a multidisciplinary approach. Each seeks to create community awareness of potential causes of and the signs of early stage radicalization, knowledge of how and where easily to seek counseling and intervention, and various types of intervention. In each, the intervention default is not law enforcement, though it is always an option. Each has an acknowledged convener, but each is organized somewhat differently, and the programs offered are locally determined. The federal government is a direct participant in the first three efforts and provides some funding for Montgomery County.

While these are important communities in the United States, the geographic coverage is still limited, raising the question of whether this kind of an effort is scalable and, if so, how it would be accomplished. I think it is and here’s how. First, the Department of Justice has tasked the U.S. Attorneys around the country to have “countering violent extremism” as one of their important tasks, and that group represents one avenue for expanding the effort, although it is important that any expansion not be seen as another law enforcement activity. Secondly, national professional groups with elements in local communities can promote and provide information to their local institutions, such as groups like the U.S. Conference of Mayors, the Association of American Colleges and Universities, the American Association of Community Colleges, the National Association of Social Workers, the various medical and mental health associations, and various national religious groups. Third, local, motivated individuals who see the problem and are willing to mobilize a local solution, like Hedieh Mirahmadi in Montgomery County, Maryland, can become catalysts in local communities. And fourth, conferences like this one, networks of concerned individuals and groups and research efforts like the joint MEI-EU effort that is a part of the conference, help spread knowledge and interest in these activities.

Beyond the local community intervention effort, I want to mention two other elements: a counter-narrative campaign and international information sharing and collaboration.

Al-Qa‘ida for some time and ISIS more recently have become very adept at creating a narrative using various social media platforms to push their brand of jihad in an appealing fashion, especially to young people. Governments, on the other hand, have been slow, ill-equipped to respond, and generally ineffective.

As a result, the U.S. government, including at the White House CVE Summit, is reaching out to the private sector—to credible messengers and to message crafters and IT innovators—to contest the digital space that al-Qa‘ida and ISIS currently occupy. While Washington can convene and connect participants, the content has to be authentic, such as disillusioned ISIS members and charismatic but government unaffiliated imams, as well as appealing and fast moving, and the government cannot be the messenger or be seen in any way as controlling the message.

Finally, I want to mention the international effort. Radicalization is obviously not unique to the United States. Recognizing that other countries in the Middle East, North Africa, and Western Europe have experienced far greater challenges in this area than we have, the United States and others have all been working together on understanding the issue and developing strategies: at the UN, specifically with UNSCR 2178 and the follow-on work it called for; at the Ministerial Meeting on Information Sharing held by the State Department in conjunction with the White House Summit in February; in the various meetings of the Global Counter Terrorism Forum and its ongoing research efforts; in meetings with the EU and EU member states; and with a number of other countries bilaterally.

One major element of this effort is information sharing to identify those who have gone to conflict zones to aid al-Qa‘ida and ISIS and who might return home, as well as to prevent others from going. While the United States is obviously interested in its own citizens and permanent resident non-citizens who might represent threats domestically in this regard, this is an international effort that requires international cooperation to prevent the currently active conflicts and terrorist acts from spreading to other countries. Moreover, with respect to Western Europe in particular, EU radicalized citizens are also a major concern to the United States because of their freedom to travel without visas to the United States. With that in mind, a number of senior U.S. officials have met with counterparts in Europe, Turkey, the Middle East, and North Africa on numerous occasions to coordinate efforts on information sharing and open source data collection, particularly regarding travel information.

In summary, violent extremism is not just an “over there” problem; it is a “here” problem, “here” in the United States and in a number of other countries. Law enforcement is a critical part of the solution, but needs to be part of a broader community-based intervention effort, supported by expanded social science research and thoughtful, authentic counter-narrative messaging. And national efforts cannot exist in isolation; this is a global problem requiring a global effort.