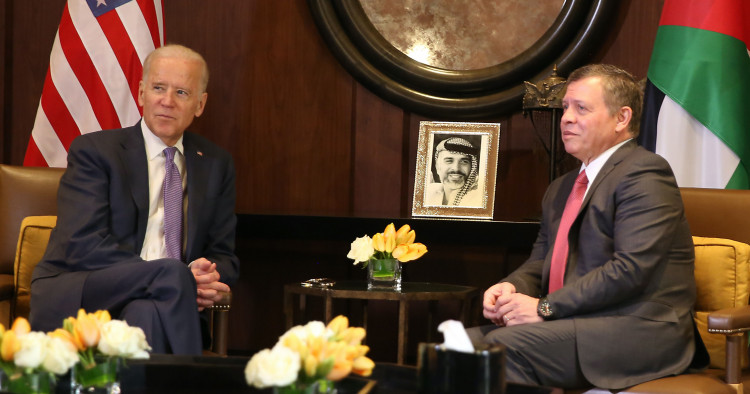 Jordan’s King Abdullah will meet President Joe Biden at the White House on July 19, the first Arab leader to be welcomed by the U.S. president since he took office in January. The official visit marks a crucial reset to U.S.-Jordanian ties, which had suffered under President Donald Trump. The last time King Abdullah visited the White House was in June 2018. Announcing the visit Jordan’s Royal Court said it will “cover strategic ties between Jordan and the United States and means of bolstering them across several sectors, as well as the latest regional developments.”

On July 7 White House Press Secretary Jen Psaki said the visit will “highlight the enduring and strategic partnership between the United States and Jordan, a key security partner and ally of the United States. It will be an opportunity to discuss the many challenges facing the Middle East, and showcase Jordan’s leadership role in promoting peace and stability in the region.” She added that President Biden looks forward to working with the king “to strengthen bilateral cooperation on multiple political, security, and economic issues, including the promotion of economic opportunities that will be vital for a bright future in Jordan.”

A difficult period for bilateral ties

It is no secret that Jordan’s longstanding ties with the U.S. suffered as a result of Trump’s Middle Eastern policies, including his decision to recognize Jerusalem as Israel’s capital in December 2017 and his subsequent proposal in January 2020 for a one-sided peace deal between Israel and the Palestinians. King Abdullah rejected the first and ignored the second. Instead, he continued to toe the line that the only just and lasting peace will come by implementing the two-state solution, which calls for Israel’s withdrawal to the 1967 lines and the recognition of a Palestinian state with East Jerusalem as its capital.

Jordan also defied the U.S. move to defund UNRWA, the UN agency responsible for the welfare of Palestinian refugees, and worked with the international community to raise money for the cash-strapped body. King Abdullah’s defiance did not endear him to the White House team working on the “deal of the century,” in particular Trump’s son-in-law Jared Kushner, whose last visit to Amman was in July 2019. Having failed to convince the king to buy into Trump’s peace deal, Kushner sought to bypass Amman altogether and broker normalization deals directly with Bahrain, the UAE, and Sudan under the so-called Abraham Accords.

There is no doubt that in the last two years of Trump’s presidency Jordan found itself marginalized as its ties to both the U.S. president and Israeli Prime Minister Benjamin Netanyahu dipped to new lows. Netanyahu had formed an alliance with Kushner with both of them embracing the “peace for peace” formula as an alternative to the “land for peace” deal that was long the basis of U.S. policy toward ending the Israel-Palestine conflict and by extension normalizing ties between Israel and the Arab countries. The king, who continued to support the Palestinian Authority (PA) and President Mahmoud Abbas during these testing times, rejected Netanyahu’s threat to annex the Jordan Valley unilaterally if the Palestinians rebuffed Trump’s peace plan.

A sigh of relief

The belief here in Jordan is that the king would have found himself facing tough times if Trump had been re-elected. Instead, there was a sigh of relief when Biden won the day. The king and Biden have known each other for almost two decades, first when Biden was a senator and head of the Senate Foreign Relations Committee and second when he became vice president to Barack Obama.

It was no surprise that the king was the first Arab leader to call the president-elect to congratulate him on his victory. Biden had uttered the magic words: that as president he would work with the king to implement the two-state solution. It was an indication that Amman was regaining its pivotal role as a gateway to a comprehensive regional solution to the Middle East conflict.

But when the two leaders meet there will be a realization that the region’s geopolitical realities have shifted. A number of Arab countries have now established peace with Israel in the absence of a deal between Israel and the Palestinians. While Netanyahu is gone — to the relief of both Biden and the king — a new coalition government in Israel is led by another right-wing hardliner, Naftali Bennett, who also opposes a Palestinian state. The U.S. is trying to limit its presence in the region and may not be willing to launch a new peace process at this time.

What’s on the agenda?

For King Abdullah it is vital that he renews U.S. support for his role as guardian and custodian of Muslim holy places in East Jerusalem — an issue that had come under threat during the last months of Trump’s presidency. In a bid to woo Saudi Arabia into concluding a separate peace deal with Israel, Western media reports suggested that Netanyahu and Kushner might have been ready to offer Riyadh custodianship of Al-Aqsa Mosque, replacing King Abdullah. Saudi Arabia has repeatedly supported Jordan’s special role at the holy mosque. One thing is clear: President Biden supports the new détente between Israel and Jordan as exemplified by the recently unannounced visit by Bennett to Amman and the ensuing agreement to supply water-parched Jordan with an additional 50 million cubic meters of Israeli water. In recent years Jordan had become increasingly dependent — to the anger of many Jordanians — on Israeli natural gas and water. Israel also agreed to allow Amman to increase its exports to the West Bank from $160 million to $700 million annually.

Before he left Amman the king met with the Palestinian president, who, according to sources, authorized him to take any steps needed to convince the U.S. administration to revive the peace process. Both Amman and Ramallah lost a lot of political sway during and after the recent Israel-Gaza war, when Hamas emerged as a key player in Palestinian politics at the expense of the PA. Jordan has no formal ties with Hamas while Abbas failed to reconcile with the movement, which controls Gaza. And following the death of a Palestinian activist, who had been critical of Abbas, while in the PA’s custody in late June, protests broke out in the West Bank calling for Abbas’ ouster. The Palestinian leader, whose term as president ended almost a decade ago, has never been more unpopular among his own people. His own Fatah movement has splintered as he postponed legislative and presidential elections earlier this year.

For King Abdullah there are other issues that he would like to discuss with the Biden administration as well. Jordan’s economy is suffering with record unemployment and poverty rates and a soaring public debt. Public pressure is mounting on the government to provide socio-economic solutions — a key factor in a sedition plot involving the king’s half-brother and a former aide aimed at destabilizing the kingdom, which the Biden administration helped expose last March.

Behind closed doors the king, who is accompanied on the trip by Queen Rania and Crown Prince Hussein, will probably ask President Biden to find ways to exempt the kingdom from penalties under the Caesar Act regarding trading with Syria, Jordan’s northern neighbor. The war-torn country is in bad need of basic goods and materials that Jordan can provide, especially to southern Syria. The White House will almost certainly put pressure on the king to speed up the process of adopting genuine political and economic reforms while improving the kingdom’s human rights and freedom of speech records.

But from a strategic angle, the two countries are boosting their military and intelligence cooperation. Earlier this month the U.S. announced that it was redeploying military assets and personnel from Afghanistan and Qatar to Jordanian bases. This comes after the two countries signed a controversial defense agreement last January that was not ratified by the Jordanian parliament.

As the two countries mark more than 70 years of bilateral ties, there is no doubt that the king, who will also meet senior administration officials; Congress leadership; members of the Senate Armed Services, Foreign Relations, and Appropriations committees; and members of the House Foreign Affairs Committee, will return to Amman feeling much better about the future of this strategic relationship. The question is how will this relationship shape the future of Jordan in a fast changing region?

Osama Al Sharif is a journalist and political commentator based in Amman. The opinions expressed in this piece are his own.