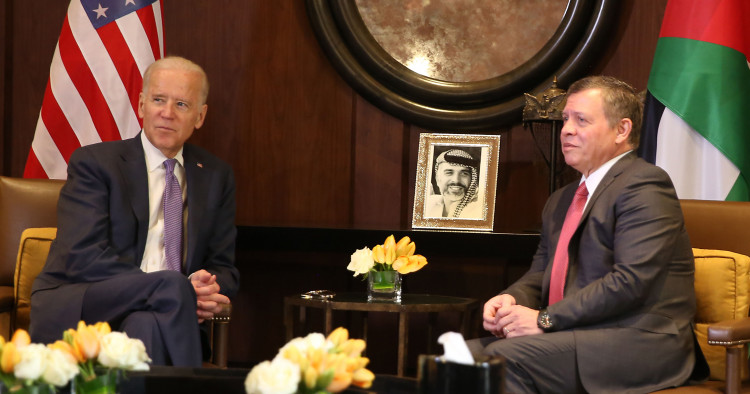 Given Jordan’s often cautious diplomatic demeanor, the best way to respond to media reports that the U.S. was about to launch a “Middle East NATO” regional alliance on the eve of President Joe Biden’s visit to the region was to step in and take a stand. And it seems that King Abdullah thought that saying “yes” to the idea when he meant “yes but” would be the best response at this stage.

Rumors about the possible formation of a new regional security framework surfaced after bipartisan legislation was introduced in Congress on June 9 calling on the Pentagon to present a strategy for integrating the air defense capabilities of Israel and Arab states in order to counter ballistic missile and other projectile threats from Iran and its proxies.

Indeed, while leaders in other Arab capitals said to become part of an anti-Iran alliance that includes Israel stayed silent, the Jordanian king was the first leader to go on record. In an interview with CNBC recorded on June 24, excerpts of which were released by the U.S. network, King Abdullah said he would be “one of the first people that would endorse a Middle East NATO,” adding that he would “like to see more countries in the area come into that mix.” In fact, he said that forming such an alliance would be possible with countries that are like-minded. But then came the caveat.

Speaking in English, Abdullah added that, “The mission statement has to be very, very clear. Otherwise, it confuses everybody.” He then shifted the subject to how countries in the region can work together to address challenges arising from the war in Ukraine, like energy and food security. “I’m hoping what you’re seeing in 2022 is this new vibe, I guess, in the region to say, ‘how can we connect with each other and work with each other?’,” he said.

Not forgetting to mention what he considers to be the core driver of the region’s instability, King Abdullah pointed to the Israeli-Palestinian conflict, saying that it has the potential to derail plans and cooperation in the Middle East. And to make sure to underscore that Jordan has no interest in getting involved in any new wars, such as with Iran, he concluded by saying that “Nobody wants war, nobody wants conflict, but it remains to be seen whether countries in the Middle East can work toward a vision where prosperity is the name of the game.”

His statements were full of subliminal messages that U.S. and, more to the point, Israeli officials would understand. Jordan is a close U.S. ally and has been a NATO partner for decades. The kingdom was incorporated within the framework of the NATO Science for Peace and Security (SPS) Program in 1998 and the U.S. declared Jordan a "major non-NATO ally" in 1996. In 2018, NATO and Jordan deepened their cooperation by signing the NATO-Jordan Defense Capacity Building (DCB) Project. Jordan has participated in NATO war games and its troops have joined the NATO Response Force; the king thus told the U.S. network that Amman sees itself as a partner of the alliance, having fought “shoulder-to-shoulder” with NATO troops for decades.

The king’s welcoming of a Middle East NATO was what the regional and international media opted to focus on. Commentators in the often-polarized Arab press were divided between those who understood the king’s embrace of a purely defensive alliance of like-minded nations and those who interpreted his statements as paving the way for Israel to lead a regional military bloc to attack Iran.

Talk of a Middle East NATO is not new. Speculation, more like rumors, became rife after the United States Central Command (CENTCOM) officially assumed responsibility for the military relationship with Israel last September, taking over from European Command (EUCOM). The move, which took place following the signing of the Abraham Accords between Israel, Bahrain, and the UAE in August 2020, was believed to facilitate a regional U.S.-led anti-Iran alliance.

The controversy was recently revived when Israeli Defense Minister Benny Gantz announced on June 27 that Israel was building a regional air defense alliance to defend its members from Iran. His announcement coincided with a Wall Street Journal report on June 26 that the U.S. held a secret meeting with Israeli and Arab military chiefs in Egypt’s Sharm el-Sheikh to counter the Iranian air threat. According to The Wall Street Journal, the meeting included top military brass from Israel, Saudi Arabia, Qatar, Jordan, Egypt, the UAE, and Bahrain.

Not a single Arab country confirmed the report. But as several Israeli media outlets spoke of the proposed alliance as being on Biden’s agenda, King Abdullah felt that he should draw some lines in the sand. Two days after excerpts of his CNBC interview were released, Foreign Minister Ayman Safadi took the matter further by telling the Al-Jazeera news network in Doha, which he was visiting, that there are no “talks of a military alliance of which Israel would be a part,” and said that this issue is not on the agenda of President Biden’s visit to the region, adding that, “There is no such proposal.”

Referring to the king’s televised interview, Safadi said, “What was raised in this context was a question that a journalist directed to King Abdullah about whether he supports the establishment of an Arab defense alliance, and it is natural that Jordan supports every joint Arab institutional action, whether it is related to defense and security or the economy.”

Safadi’s comments prompted his Egyptian counterpart Sameh Shoukry to announce from Bahrain on June 28 that there are currently no plans to form a NATO-like alliance in the region and that “such a proposal needs lots of consultations.”

For Jordan an alliance of which Israel is formally a member is no more than a mirage at this stage. Public backlash notwithstanding, Arab countries, including some Gulf states, are hesitant to openly join an anti-Iran military coalition even as they harbor fears about Tehran’s regional agenda.

Amman understands Israel’s sense of urgency and desire to formalize its so far secretive military cooperation with most Arab states. For its part, Jordan, which has maintained a low-key relationship with the Islamic Republic, does not want to get sucked into a new regional conflict. In fact, there have been unconfirmed reports that Iraqi Prime Minister Mustafa al-Kadhimi is carrying messages not only between Tehran and Riyadh but also between Tehran and Amman.

For Jordan it was important to pre-empt any talk about Israeli membership of a potential regional military alliance. This will remain its position as long as the Israeli-Palestinian conflict is unresolved.

One thing pundits in Amman are certain of though is that intra-Arab differences and rivalries, even when it comes to Iran, will ensure that there will be a long, long way to go before an open military alliance with Israel comes into existence.