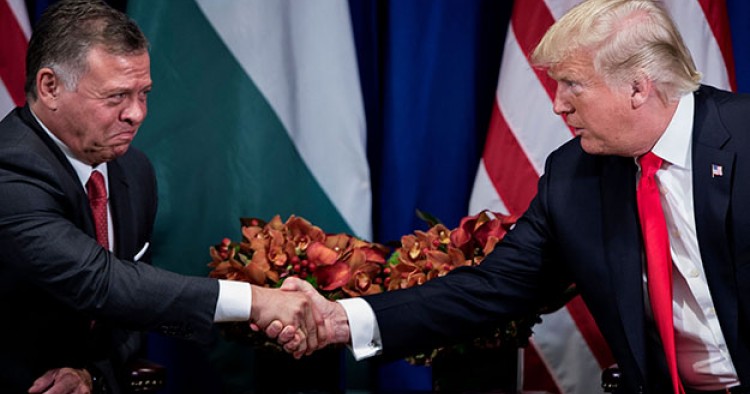 Unlike the celebratory reception he received in Israel, U.S. Vice President Mike Pence’s visit to Jordan on Jan. 22 was low-key and short. There was no touring of the kingdom’s historical sites and no interaction with the Jordanian parliament. At the popular level, public opinion was mobilized against the visit. On a cold and rainy day, three days before Pence’s arrival, a handful of Jordanians held a protest in front of the U.S. embassy in West Amman—as they had every Friday since President Donald Trump’s Dec. 6 declaration on Jerusalem—but this time they also denounced the vice president’s upcoming visit.

Pence, an evangelical Christian with a history of supporting Israel on religious grounds, has come to represent the driving force behind Trump’s now infamous and controversial decision to recognize Jerusalem as Israel’s capital and to relocate the U.S. embassy there. That decision rattled the Palestinians but shocked the Jordanian leadership even more. King Abdullah—always the optimist—had tried to build a special relationship with Trump, meeting him before he was sworn in and then paying him a visit at the White House in April 2017. The king believed that Trump’s maverick character could help chart a new approach to the region’s most intractable problem: the Palestinian-Israeli conflict.

Trump, on his part, had lauded the Jordanian monarch, describing him as “a great warrior” and assuring the kingdom of America’s continued support and solidarity. The decades-old alliance between the two countries appeared to be as solid as ever.

The king had tried to educate Trump on the intricacies of final status issues, chief among them the fate of Jerusalem, a divisive and sensitive issue for both sides. He met repeatedly with Trump’s White House team, led by the president’s son-in-law Jared Kushner. He had no doubt that Trump’s much touted “ultimate deal” might actually deliver a genuine peace process, in spite of the president’s vague position on what Jordan and the Palestinians—in addition to the rest of the world—believe is the foundation for a just and lasting settlement: the two-state solution.

But a few months into his presidency, Jordan and the Palestinians began to sense that Trump was taking a different direction. Kushner and Saudi Arabia’s Crown Prince Mohammed Bin Salman had developed a strong bond and shared a similar vision on Iran, Israel, and the peace plan the White House was working on. For both, the real priority was confronting Iran’s regional agenda and not Israel’s occupation of Palestinian territories.

Even then, King Abdullah continued to push for a comprehensive solution to the Palestinian-Israeli conflict based on the 2002 Arab Peace Initiative. For Jordan, the two-state solution provided the ultimate guarantee that the so-called “Jordan option,” frequently extolled by the far-right politicians that comprise Prime Minister Benjamin Netanyahu’s coalition, was dead and buried. And at the heart of that solution is East Jerusalem, including the Old City, where the Hashemites hold a special custodianship role as protectors of Muslim and Christian holy sites.

As the Jordanian and Palestinian leaderships waited nervously for a glimpse of the White House peace plan, out of the blue came Trump’s announcement of his unilateral decision to move the U.S. embassy to Jerusalem. King Abdullah’s reaction was unprecedented. He rejected Trump’s move and warned of its dire consequences. As head of the Arab Summit, he ordered his foreign minister to launch a diplomatic offensive. Ignoring Saudi pressure, he attended the Islamic Organization Cooperation (IOC) in Istanbul on Dec. 20, delivering a stern speech that was critical of the U.S. decision.

When the Palestinians went to the U.N. General Assembly on Dec. 21 to extract a decision against the U.S. move, Jordan ignored U.S. threats and voted for the resolution. It was the lowest point in Jordan-U.S. ties since the 1990 Gulf War, when the late King Hussein I refused to join a U.S.-led coalition to force Saddam Hussein out of Kuwait.

But then the international and regional outcry against Trump’s decision began to wane. Against Jordan’s advice, Palestinian President Mahmoud Abbas decided to cut all ties with the Americans. He said that by taking a unilateral decision on Jerusalem the U.S. had disqualified itself as a mediator. His calculations were different from that of the Jordanians.

Jordan, increasingly dependent on U.S. aid—which amounts to around $1.3 billion annually—could not afford to take its disagreement with the Trump administration to the brink of confrontation. King Abdullah, a pragmatist, believes that quiet diplomatic engagement with the U.S. over the issue is much better than confrontation at this stage. The king also believes that there can be no peace process without the U.S.. Besides, the geopolitical conditions were changing in the region and it was better to bend a little and weather the approaching storm.

Jordan began to tone down the rhetoric without blurring the message. It avoided direct criticism of the U.S. decision to slash aid to UNRWA, the U.N. agency responsible for over 5 million Palestinian refugees. It responded positively to U.S. mediation with Israel, whose embassy in Amman had been closed since July 2017 following the killing of two Jordanians by an Israeli guard.

Then came Pence’s visit—the first senior U.S. official to visit Jordan since Trump’s Jerusalem proclamation. As much as Jordan’s public opinion was against the man and his visit, the king made sure that Jordan’s message on Jerusalem was delivered loudly and clearly to the visiting official. He said that he had repeatedly warned Washington about the risks of recognizing Jerusalem as Israel’s capital and that he hoped the United States would now “reach out” and find the right way to move forward. At the end of a bilateral meeting followed by a small lunch banquet, Pence made his response: “We agreed to disagree on Jerusalem.”

That quote was not carried by the local media. Instead, the king’s remarks on Jerusalem made the headlines. Commentators praised the king’s boldness and courage. The public was somewhat satisfied. But behind closed doors the short-lived rift between the two countries had ended—for now. Jordan had secured the flow of U.S. aid for at least the coming five years, this writer has learned. The two countries were now focusing on other issues: fighting terrorism, Syria, Iraq, and regional stability. It seemed that it was business as usual for the two allies.

But behind the scenes, one can detect the sense of growing frustration and disappointment felt by the king. In a small meeting on Jan. 10 with retired army generals outside Amman, the king was quoted by local websites—not by the official news agency or the royal court—as telling his comrades in arms: “The Palestinian cause is the responsibility of the international community and not only Jordan and Palestine. ... Jordanian interests come above all considerations.”

The king’s private frustration would not override his pragmatism. Asked by an Israeli reporter at the World Economic Forum in Davos, Switzerland on Jan. 24 about his feelings following the embassy incident and the Trump decision on Jerusalem, the king said that he believed a political solution could still be reached. He added that he is always an optimist and would rather see the glass half full.