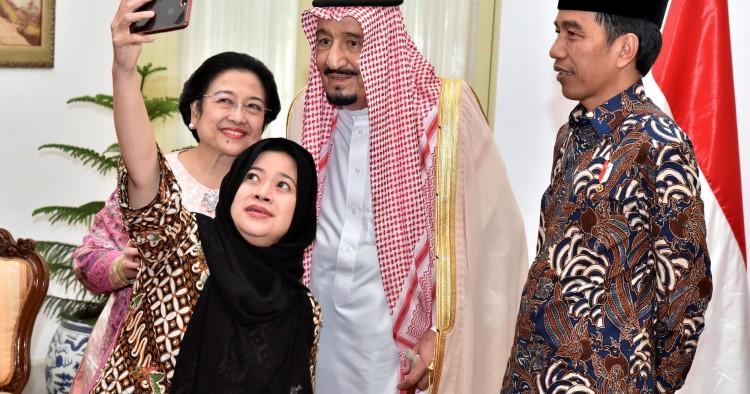 On March 1, 2017 King Salman of Saudi Arabia, accompanied by a 1,500-member entourage, arrived in Indonesia to cheering crowds. Top Indonesian government officials and politicians described the visit as extraordinary, while enthusiastic onlookers in the tens of thousands lined the route taken by the king’s heavily guarded motorcade from Halim Perdanakusuma Airport in Jakarta to the Bogor Presidential Palace.[1] For days, the Indonesian mass media were saturated with accounts of the king’s visit and activities.

This article examines the outcome and implications of King Salman’s historic trip to Indonesia in March 2017 — the first such visit by a Saudi monarch since King Faisal bin Abdulaziz Al Saud (1906–1975) met with President Suharto in 1970 in Jakarta. The article first provides a brief overview of the bilateral relationship. Next, it considers the extent to which King Salman’s visit succeeded in strengthening diplomatic ties and boosting economic cooperation. The article then examines the visit through the lens of some of the socio-cultural and religious changes that have been taking place in the Kingdom in recent years, which could help dispel some of the negative images of Saudi Arabia held by many Indonesians.

Saudi–Indonesian relations have ebbed and flowed throughout their history — sometimes marked by tension and at other times by dialogue and cooperation. In the aftermath of the 1979 Iranian Revolution, for instance, the shared interest in blunting the influence of Iranian Shiism in their respective societies drew Saudi Arabia and Indonesia closer together.[2] However, the relationship has also been marked by friction; for example, numerous complaints have been lodged regarding the alleged maltreatment by some Saudi employers of Indonesian domestic workers in the Kingdom (especially housemaids).[3] On the economic front, the level of trade and investment between the two countries has always been relatively low. Since oil prices plummeted, the value of bilateral trade and Saudi foreign direct investment in Indonesia have declined. Meanwhile, statements by local officials and the press have tended to reinforce negative Indonesian attitudes toward Saudi Arabia.[4]

Against this backdrop, King Salman arrived in Jakarta, on the second leg of a five-nation tour of Asia. The King’s visit to Indonesia culminated in the signing of 11 memoranda of understanding (MOUs), including in the areas of trade, education, health, culture, pilgrimage, tourism, information, science, technology, civil aviation, fisheries, defense, security and combatting transnational crime.[5] In addition, Indonesian and Saudi companies concluded investment agreements in the housing construction, medical service, power generation, and tourism sectors.[6] The visit resulted in a Saudi pledge of $8.8 billion in development finance — substantially less than the $25 billion in new investment that the Indonesian side reportedly had hoped to obtain[7] though far exceeding the sums of previous years. The visit also left unresolved the issues raised by labor activists regarding the treatment of Indonesian migrant workers and the families of Indonesian victims of two deadly accidents in 2015 related to the hajj.

But King Salman’s visit to Indonesia should be viewed not simply not only in terms of what it did or did not accomplish in advancing political and business but also in terms of the image of Saudi Arabia it conveyed and the contribution it might have made to changing Indonesians’ perceptions of Saudi Arabia. Like most societies in other parts of the world, Indonesians have generally tended to regard Saudi Arabia as the fountainhead of strict Salafism (or Wahhabism), which they associate with radicalism and intolerance. The negative image of Saudi Arabia held by many Indonesians prior to the King’s visit was partly attributable to the role played by some Indonesian Islamic studies alumni of Saudi educational institutions as well as Islamist groups that use Saudi as a “religious cloak” for their religious extremist views and actions.[8]

Expressions of goodwill to all of the country’s religious communities are noteworthy, and might well be remembered as a significant step in countering some of these stereotypes. During the visit, King Salman (and his staff) held a series of interfaith meetings and dialogues with Muslim and non-Muslim leaders and religious scholars, as well as with Chinese and non-Chinese political leaders and business people. The King exchanged handshakes with women and graciously acceded to requests from some of them to be photographed with him. In Bali, King Salman was accompanied by an Indonesian Christian priest conversant in Arabic. He took the opportunity during his multiple meetings with civic and political leaders to laud Indonesia’s remarkable diversity and religious harmony, and to emphasize his personal and his country’s commitment to fight against terrorism, extremism and radicalism as well as to foster tolerance and dialogue across religions and cultures.[9]

King Salman’s rhetoric and conduct during his visit pleasantly surprised, and perhaps even “shocked” many Indonesians. Images of the interfaith meetings in which he participated and handshakes with female leaders, along with excerpts from the speeches he made, were widely circulated on Indonesian television and radio, the Internet, and social media.

King Salman’s visit served as a mirror of shifting phenomena in Saudi Arabia. His warm and enthusiastic engagement with non-Muslims and women leaders, as well as his stance for religious moderation and anti-extremism, reflects rapid social changes taking place in contemporary Saudi society.

In fact, it is fair to say that since the late King Abdullah (1924–2015) assumed power following the death of his half-brother Fahd in 2005, Saudi Arabia has undergone major changes in domestic and global affairs. During his reign, King Abdullah instituted a wide range of reform initiatives ranging from policies on education and women to interfaith dialogue and Islamic moderation, which his successor, King Salman, has continued and built upon.

Commenting on King Abdullah, Rob Sobhani, author of “King Abdullah of Saudi Arabia: A Leader of Consequence,” wrote in Forbes Magazine that the King’s domestic policies, coupled with his active involvement in religious peacemaking and interfaith meetings, has contributed to the creation of a “new climate of dialogue and openness, challenged the obscurantist clerical establishment, created openings for women, and liberalized the economy.”[10]

Among numerous changes happening in Saudi Arabia, at least four issues deserve special mention: education, religious affairs, interfaith engagement and women’s emancipation. In education, the government has applied a vast scholarship program that has enabled male and female Saudi students to study at the world’s top universities, particularly in North America, Western Europe, and Australia. The program, which provides funds for tuition and living expenses for up to four years, resulted in hundreds of thousands of students pursuing undergraduate and postgraduate degrees in some 25 countries. In future, graduates of these Western schools will almost certainly leave their own mark on the Kingdom’s religious and political reformation.

Moreover, in religious education, the Kingdom has allowed Muslim minorities such as Shiites, who make up roughly three percent of the nation’s total population, and followers of non-Hanbali schools of law (mazhab) to use their own religious texts in schools. The Kingdom also revised national curricula by incorporating non-Hanbali religious traditions. It also permitted Shiites to celebrate publicly their religious holidays. Religious engagement is another breakthrough. Long before King Salman ascended the throne in 2015, the Kingdom had initiated a series of intra-religious meetings with non-Wahhabi and Hanbali leaders, clerics and scholars in the country, including the celebrated Shiite scholar Hasan al-Saffar.[11]

Both King Abdullah and King Salman deeply engaged with non-Muslim leaders across the world. After subsequent visits to, and encounters with, non-Muslim religious leaders in many parts of the world, the monarchs call for a brotherly and sincere dialogue between believers of all religions. Both King Abdullah and King Salman appealed to Muslim clerics and Wahhabi leaders to engage with their non-Muslim counterparts to build a global, international peace and religious tolerance as well as to forge a cross-religious alliance to fight against extremism and terrorism. The founding of King Abdullah bin Abdulaziz International Center for Interreligious and Intercultural Dialogue (based in Vienna) and King Salman Center for Global Peace (based in Malaysia) reflects their commitment to these issues.

In recent years, the Kingdom has also made significant progress with respect to women’s issues. In 2013, signaling a relaxation of the practices of gender segregation, King Abdullah issued a decree appointing 30 women to the previously all-male 150-member Shura Council, an advisory body charged with reviewing laws and questioning ministers. This decree followed one issued two years earlier that had granted women the right to vote and run as candidates in local elections.[12] Despite strong protests from “old-fashioned” Salafis, King Abdullah stood firm.[13]

King Salman has continued his brother’s efforts to empower women. His many impressive decisions and policies on women’s issues include a decree that allows women to drive, and that features a less prominent role for the religious police. There are indeed many other signs of progress in increasing the participation of women in the workforce and public affairs — a key objective of Vision 2030.

Years from now, King Salman’s March 2017 visit to Indonesia might well be remembered less for the pomp and pageantry that accompanied his arrival or the 11 MOU’s that were signed than for the image it conveyed of a rapidly changing, more progressive Saudi Arabia. Such changes in social, cultural and religious matters could offer a more favorable environment within which to pursue more expansive diplomatic, business, and cultural relations with the Indonesian government and society in the years to come.

[12] In a response to this “controversial” policy, a group of Wahhabi hard-liners and conservative clerics protested on the streets outside the royal palace in Riyadh. They saw the decree as a dangerous change for the country and a violation of Islamic Shariah.

[13] King Abdullah’s remarkable efforts and policies sketched above might provide one important reason why the political unrest that has rocked the Arab and North African region since late 2010 has only lightly touched Saudi Arabia. This may be more important than the “bribery” of the people into obedience and loyalty by means of massive fiscal stimulus and welfare benefits, as many analysts have assumed.