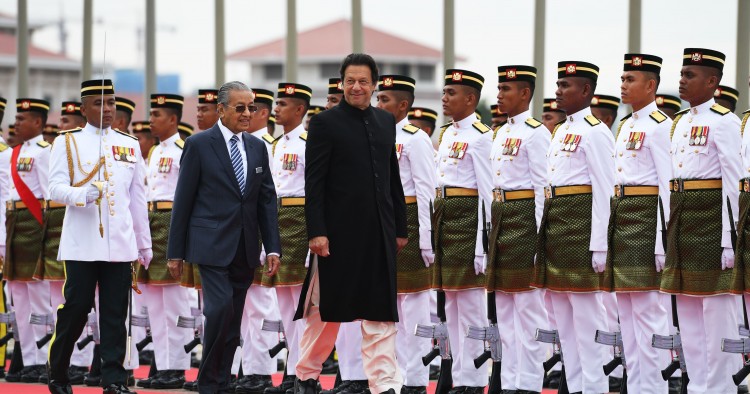 On Nov. 23, Malaysia’s prime minister, Mahathir Mohamad, announced that his country will stage an Islamic summit in Kuala Lumpur from Dec. 19-21. The event, on the theme of “The Role of Development in Achieving National Security,” will feature representatives from the host country as well as Indonesia, Pakistan, Qatar, and Turkey. Around 450 leaders, scholars, clerics, and thinkers from 52 countries will attend, along with Turkish President Recep Tayyip Erdoğan, Qatari Emir Sheikh Tamim bin Hamad al-Thani, Indonesian President Joko Widodo, and Pakistani Prime Minister Imran Khan.

Mahathir said that the summit will be the first step toward finding solutions to the Islamic world’s ills, and he asked for international support for this effort. Problems that will be discussed include the displacement of Muslims worldwide, food security, national/cultural identity, and Islamophobia. Other pillars of the summit will be technology, trade, internet governance, and security.

Mahathir lamented the fact that “failed states” and underdeveloped ones exist throughout the Islamic world. “Why is there this problem? There must be a reason behind this. We can only know the reason if we get the thinkers, the scholars, and the leaders to give their observations and viewpoints,” he said.

According to the Malaysian news agency Bernama, Mahathir devised plans for the summit while meeting with Turkey and Pakistan’s heads of state at the UN General Assembly in New York last year. Reportedly, Malaysian Foreign Minister Saifuddin Abdullah and his deputy, Marzuki Yahya, recently visited several Muslim-majority countries — including Oman and Iran — to invite other leaders as well.

In the past, Mahathir has received praise from officials in Ankara and Islamabad for his outspokenness on a number of issues on which his positions align closely with those of Turkey and Pakistan. These include the Palestinian question, the plight of Muslims in Indian-administered Kashmir, and the human rights of the Rohingya in Myanmar. According to Bernama, the summit “aims to revive Islamic civilization, deliberate [over] and find new and workable solutions for problems afflicting the Muslim world, contribute [to] the improvement of the state of affairs among Muslims and Muslim nations, and form a global network between Islamic leaders, intellectuals, scholars, and thinkers.”

According to Qatari journalist Jaber al-Harami, this month’s summit in Malaysia will be about laying the foundations for an Islamic alliance that could pursue joint projects, including, eventually, the introduction of a common currency. “The initiative is ambitious, and comes in accordance with the aspirations of these countries, especially as some of them talked about the creation of an Islamic bloc focused on defense industries, development, and good governance, and Qatar had a [lead] in this aspect.”

It is notable that high-level representatives from Saudi Arabia, whose king is the Custodian of the Two Holy Mosques (at least officially since 1986), were not invited. Further, the summit is to serve as an alternative to the Jeddah-headquartered Organization of Islamic Cooperation (OIC), which is under Saudi Arabia’s de facto leadership. Mahathir also said that this mini-Islamic conference could turn into a much grander initiative down the road, suggesting a potential challenge to the OIC.

It appears that a growing number of Muslim-majority countries are becoming increasingly uncomfortable with Riyadh’s leadership in Islamic affairs since the ascendancy of Crown Prince Mohammed bin Salman (MbS). From the Yemen war to a growing tacit alliance with Israel to the killing of Jamal Khashoggi, MbS has made a number of decisions that have unsettled many in Muslim-majority countries. Now leaders across the Islamic world are considering that MbS could soon become the next Custodian of the Two Holy Mosques, and asking how that will impact Islamic affairs. These countries have perspectives on many issues facing Muslim countries that strongly differ from MbS’ own views and priorities.

Plight of the Uighurs

Perhaps the 64,000-dollar question is whether the plight of Muslims in Xinjiang will be discussed at this month’s summit. With the partial exceptions of Qatar and Turkey, none of the governments sending officials to Kuala Lumpur have taken a stance against the Chinese leadership on the oppression of Uighurs and other Muslim communities in western China. Given China’s economic, diplomatic, and geopolitical weight in the broader Islamic world, with virtually all Muslim-majority countries seeing deeper ties with Beijing as serving their national interests, it is understandable why Islamabad, Jakarta, and Kuala Lumpur have refrained from publicly criticizing China on this front.

This is not to say that the plight of Muslims in China is not a cause for concern among various groups within all of these countries, however. “Aside from the already well-known Palestinian, Syria, and Yemen conflicts, the issues of Uighurs and Rohingyas are still not well deliberated,” said the president of the Malaysian Consultative Council for Islamic Organisation (Mapim), Mohd Azmi Abdul Hamid. “We hope that the KL summit will be successful in charting the cause for unity of the ummah, and the rebuilding of the economic standing and development of the Muslims.”

In fact, Azmi has challenged China’s official narrative about human rights in Xinjiang, describing the situation in western China as a “historical moment of darkness” and drawing parallels between the struggle of the Uighurs and the predicament of Muslims in Kashmir and Myanmar. Mapim has called on Malaysian officials to raise Xinjiang-related issues with their Chinese counterparts.

Alexander Wain, of the International Institute of Advanced Islamic Studies Malaysia, has argued that the Southeast Asian country has a special role to play in relation to the Uighurs because of China’s reliance on Malaysia for trade, given the latter’s proximity to the Strait of Malacca. “[Malaysia] should try to reach a resolution by raising this and making sure the Chinese government hears it,” said Wain

Naturally, the leaders of the five countries participating in the Kuala Lumpur summit will have to strike a balance when it comes to addressing the situation in Xinjiang. Refusal to toe Beijing’s line risks fueling tensions at a time when all of these states are seeking to strengthen their ties with China. By the same token, if the plight of the Uighurs is not addressed, the participants will face criticism from various Muslim voices worldwide, who may see this forum as the most appropriate venue for raising the issue.

A brighter future for Muslims?

Today there is much despair among the world’s 1.7 billion Muslims. The hopelessness and violence in Syria, Yemen, Gaza, Iraq, Libya, and other places highlights how many dreams are shattered throughout the greater Islamic world. Growing unease with Saudi Arabia’s leadership among Muslim-majority countries has contributed to a desire to see institutions and summits led by other states, which could, theoretically, provide alternative paths to solving the problems of the Islamic world. From a geopolitical perspective, the reaction from Saudi Arabia and the United Arab Emirates may be significant, as will the countries that receive invitations and ultimately end up attending the summit.

No one knows what will come out of this event. However, it is probably safe to say that, at a minimum, Mahathir — who is known for championing solidarity among the global ummah — will strengthen his country’s relations with the participating governments. The gathering will also likely boost his image as a leader who is willing to take on problems facing Muslims in a forum that is independent of Saudi influence. Yet it remains to be seen whether this summit will end up being mainly an exercise in optics and rhetoric, or a new beginning in finding ways for Muslims to exchange ideas and join together on issues where there is significant common ground.

Giorgio Cafiero is the CEO and founder of Gulf State Analytics, a geopolitical risk consultancy based in Washington, DC. His research interests include geopolitical and security trends in the Arabian Peninsula and the broader Middle East.

Dr. Khalid al-Jaber is the Director of MENA Center in Washington D.C. Previously, he served at al-Sharq Studies & Research Center and as Editor-in-Chief of The Peninsula, Qatar’s leading English language daily newspaper. The views expressed in this article are their own.