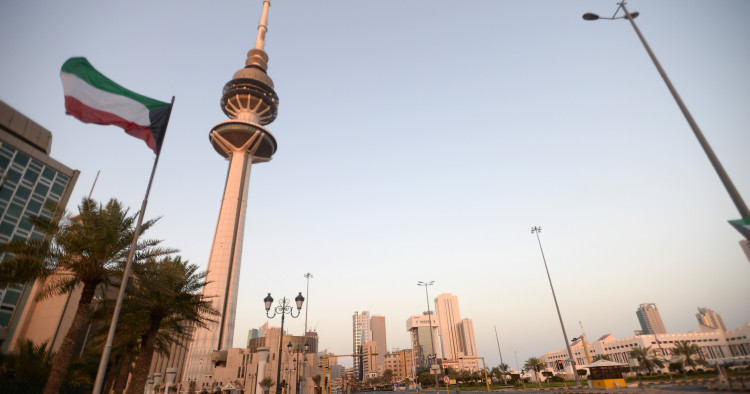 Kuwait is stuck in a major predicament. The government continues to engage in significant deficit spending, even as it's readily available funds dwindle, while political gridlock limits the government’s ability to replace those shrinking financial resources.

Although Kuwait is dealing with liquidity challenges, it is flush with financial reserves. As of January 2021, it was producing 2.3 million barrels of oil per day, making it the tenth largest producer in the world. GDP per capita in 2019 was $32,000, among the highest in the Middle East and North Africa. The country’s Reserve Fund for Future Generations (RFFG) is reported to over $500 billion in assets. Fitch credit ratings agency gives Kuwait a “AA” (negative) long-term sovereign credit rating.

However, there are serious concerns that the government won’t be able to make payroll in March 2021: the government’s General Reserve Fund (GRF) — the account that it has been using to finance its budget deficit — is nearly depleted after being used to help finance the government’s $46 billion budget deficit (equivalent to 32% of GDP) for the fiscal year 2020/21. That fiscal pressure is only going to continue over the coming year as the state’s monthly revenues continue to fall short of its expenses. On Jan. 25, the Ministry of Finance presented a draft FY2021/22 annual budget to the cabinet that estimated another budget shortfall of $40 billion based on oil prices of $45 per barrel. Although the IMF estimates that oil prices will rebound to $50 per barrel for 2021, this is still well below Kuwait’s projected fiscal breakeven price of approximately $90 per barrel.

Kuwait does have the financial resources to tackle its immediate budget issues. The solution is for the National Assembly to issue a law that would allow the government to tap international debt markets or to withdraw funds from the RFFG. However, to date Parliament has been unwilling to take these actions amid strong disagreements over broader governance issues with the executive branch.

More specifically, the National Assembly has been unwilling to pass legislation to raise money without getting something in return. It wants the government to root out corruption, waste, and mismanagement, which MPs have suggested are the real reason for the country’s fiscal woes They have advocated for political reforms around the structure of the electoral system and sought amnesty for political dissidents. However, the executive branch, and the ruling family that controls it, has been nearly as stubborn in its refusal to compromise.

Nevertheless, Kuwait will find a way to avoid a major fiscal crisis that would leave the state unable to pay the salaries of government-employed nationals in the coming year. Either Parliament bends to the government’s demands and passes a law to allow debt financing or withdrawal of funds from the RFFG, or the emir dissolves it in the coming weeks and passes a decree while Parliament is out of session to allow for those actions. The latter option is looking more likely following Emir Nawaf al-Ahmed al-Jaber al-Sabah’s decree on Feb. 18 to suspend the National Assembly for one month, in what is potentially a prelude to its dissolution and another round of parliamentary elections.

Bigger issues on the horizon

While debt issuances or withdrawal of RFFG funds would help to solve Kuwait’s fiscal issues for the next year or two, the bigger issue is the need to enact deeper structural reforms to snowballing fiscal imbalances that threaten to decimate government reserves over the coming decade.

At the crux of this is the public sector wage bill. According to an IMF study from 2015, the government employs more than 85% of the national workforce, resulting in the GCC’s highest public sector wage bill at 12.4% of GDP. The use of government jobs to maintain low unemployment rates is unsustainable due to Kuwait’s youth bulge, which will see its largest demographic groups enter the workforce in the coming years. As of 2020, Kuwait’s largest population groups, by five-year increments, were those aged 5-9 years, 10-14 years, 1-4 years, and then 15-19 years. The country already has high youth unemployment at 16.5%, and UNICEF estimates that by 2030 Kuwait will face a 53% increase in youth labor force compared to 2015. There will be significant public pressure on the government to provide jobs for young citizens.

The government in 2018 sought to address this systemic issue by announcing a new Kuwaitization program, which would reduce employment of foreigners in the public sector in an attempt to make room for young Kuwaitis. According to government statistics in 2018, 25% of the government’s 400,000 employees were expatriates. However, this process will present its own challenges. The largest concentrations of foreigners are in the Ministry of Education and Ministry of Public Health, positions that entail specific that will not necessarily be easily found in the local population. There are also large proportions of foreign workers at the Kuwait Flour Mills and Bakeries Company, Kuwait Public Transport Company, and Kuwait Airways. However, Kuwaitis will be less willing to take some of these jobs that are viewed as less prestigious. Moreover, replacing foreigners with citizens will also likely prompt the government to pay higher salaries for the same job; the average monthly salary for a Kuwaiti government employee was KWD 1,481 ($4,892), compared to KWD 691 ($2,282) for non-Kuwaitis, as of 2018.

All of this is to say that ever-growing salaries and pensions will continue to take up a significant percentage of government spending (72% in the 2021/22 draft budget), which will seriously undermine the state’s ability to direct spending toward capital investments. These investments are needed to create private sector jobs for a growing population, and failure to change government spending habits will sustain the citizenry’s reliance on oil exports that fund state spending.

Solving this challenge will require buy-in from, and cooperation by, all branches of the government. However, the contentious relationship between the legislative and executive branches and parliamentarians’ strong resistance to public sector employment reform efforts will hinder progress. There is a perception in Parliament that ending government corruption and the eventual return of high oil prices (a sentiment that may be strengthened by the recent oil price rally) would — on its own — bridge the budget gap over the long term. There will also be public resistance to government employment reform that runs counter to Article 41 of the constitution, which mandates that the “state shall make work available to citizens.”

Therefore, once Kuwait solves this immediate fiscal liquidity issue, it will still have large, structural financial and economic challenges over the coming decade that will be very difficult to solve. Nevertheless, failure to do so risks draining the wealth Kuwait has so meticulously and presciently built up since 1953 when it established the world’s first sovereign wealth fund.

Alexander Werman is a political and security risk analyst focusing on the Middle East and North Africa region. In his current role at Control Risks, a global specialist risk consultancy, he leads the company’s research on Jordan, Israel, and the Palestinian Territories. The views expressed in this piece are his own.