Lebanon is standing on one leg; the US needs to support it 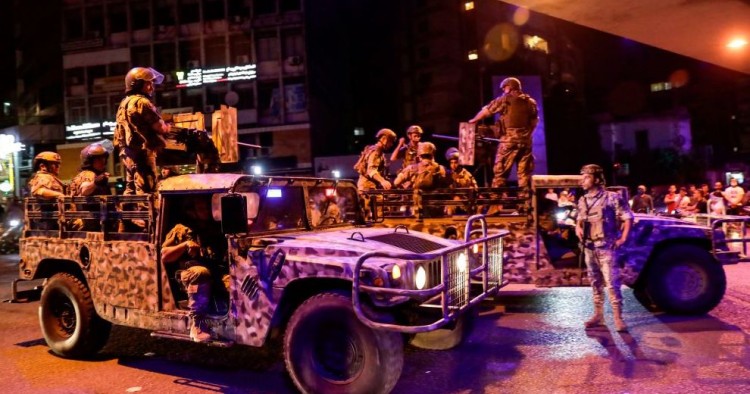 Over the past decade, the two main pillars of Lebanon’s stability have been the country’s army and its banking sector. Both have been, to some extent, tied to the United States, which has provided weapons and assistance to the Lebanese Armed Forces (LAF), while the Lebanese banking system has utilized the U.S. dollar in what is a largely dollarized economy. Today one of those pillars — the banking sector — has all but fallen and Lebanon is standing on one leg: its army.

In a further sign of bad things to come, the director-general of the Ministry of Finance recently announced his resignation. Alain Bifani had been in his post for more than 20 years and was seen as a critical figure in Lebanon’s talks with the IMF. Bifani told a local TV channel, after his announcement, that Lebanese officials were reckless and they would hurt the Lebanese people with the way they were conducting themselves.

Despite promises from the current government headed by Prime Minister Hassan Diab to carry out reforms in order to unlock more than $11 billion in international aid pledged at the 2018 CEDRE conference, all signs point to economic disaster and further chaos.

This point has been raised between Lebanon’s army chief, Gen. Joseph Aoun, and U.S. officials, including members of the Defense Department, State Department, and Congress, and last Wednesday Aoun met with CENTCOM Commander Gen. Frank McKenzie in Beirut.

With Hezbollah and its disruptive role in Lebanon returning to the limelight in recent weeks after the U.S. ambassador to Lebanon was banned by judicial order from giving public interviews, Aoun has asserted that the solution to Hezbollah is a political matter and does not involve the army. The focus for the LAF is on maintaining security, not getting involved in politics.

Maintaining security amid a crisis

However, maintaining security amid a steadily worsening economic crisis presents significant challenges, and with the national currency plummeting by more than 80 percent since late last year, there are worries about the army’s morale.

With the erosion of the Lebanese pound and the decline of purchasing power, there are growing economic concerns for the LAF: even as military salaries are worth less and less, the cost of providing free medical care for soldiers and their families continues to increase and may ultimately prove unsustainable. Aoun is visiting barracks across the country to hold the troops together and explain what is being done.

While U.S. assistance to the LAF has so far been restricted to materiel, training, and equipment, U.S. and Lebanese military officials need to discuss mechanisms bypassing Lebanon’s Ministry of Finance that could be put in place to shore up military personnel’s purchasing power. This was previously done in Iraq and there is an option to use counterterrorism funds earmarked for Lebanon in this regard. This would also help to mitigate the risk of funds being diverted elsewhere or scooped up by the political elite, which is one of the main reasons Lebanon now finds itself in one of the worst financial and economic crises in its history.

At the same time, the LAF continues to deal with popular demonstrations that have taken a sectarian turn for the worse in recent weeks. Aoun says the troops are becoming more comfortable dealing with demonstrations and ensuring public property and freedom of movement, while also safeguarding the freedom to demonstrate.

Until now, chaos has been forestalled, but the inevitable appears to be inching closer. In order to prevent this, it is essential for Washington to maintain its security assistance to the LAF. With the Trump administration continuing to evaluate its stance on Diab’s government and the recent summoning of Ambassador Shea, the government to government relationship is shaky at best. State Department officials have said behind closed doors that Shea attempted to “turn the page” on the recent incident, but Diab has continued to make public statements against the ambassador.

There are real fears on the security front as well, including the threat of an ISIS resurgence. Aoun has raised concerns that terrorist cells have penetrated Palestinian and, to some extent, Syrian camps in the country. Palestinian refugees in Lebanon are expected to protest violently if Israel moves forward with any plans for annexation of the West Bank and Jordan Valley.

Lebanon and the U.S. have a shared interest in maintaining control of formal and informal camps, and this gives them another reason for security cooperation. Gen. McKenzie recently spoke of the need to continue partnering with the LAF and doubled down on that during his visit to Beirut.

Apart from security incidents that could quickly lead to the situation spiraling out of control — the most recent of which saw former Prime Minister Saad Hariri’s convoy targeted — fears of crime are rising as refrigerators go empty. The situation is dire and has reached a point where even bread distribution is at risk, and photographs of lines of residents waiting outside bakeries have been widely circulated.

Washington and its European allies have a number of reasons to remain invested in Lebanon. It was the first country in the Middle East, and arguably the world, to declare the defeat of ISIS, and the LAF’s stability is essential in this fight.

Moreover, were Lebanon to collapse and become a failed state, it would likely have ripple effects across the region. It could pose a threat to key U.S. ally Israel and the resulting influx of Syrian, Palestinian, and Lebanese refugees heading across the Mediterranean might also threaten Europe’s stability as well.

As the bipartisan divide over U.S. foreign policy continues to grow, especially when it comes to the Middle East, Republicans and Democrats must maintain a shared commitment to supporting security forces across the region. There must be no repeat of the mistakes made following the invasion of Iraq in 2003, when the Iraqi security apparatus was allowed to collapse, presenting a ripe opportunity for extremism, terrorism, and chaos.

It is equally important to separate the fight against Iran and its proxies from U.S. Lebanon policy as a whole, to ensure that ordinary citizens and residents do not become collateral damage. If the U.S. does not tread this fine line carefully, the only group that will benefit is Hezbollah, as has been the case since it was formed.

Joseph Haboush is a non-resident scholar at the Middle East Institute and a journalist. The views expressed in this piece are his own.