The link between Lebanon’s Hezbollah and Iraqi militias 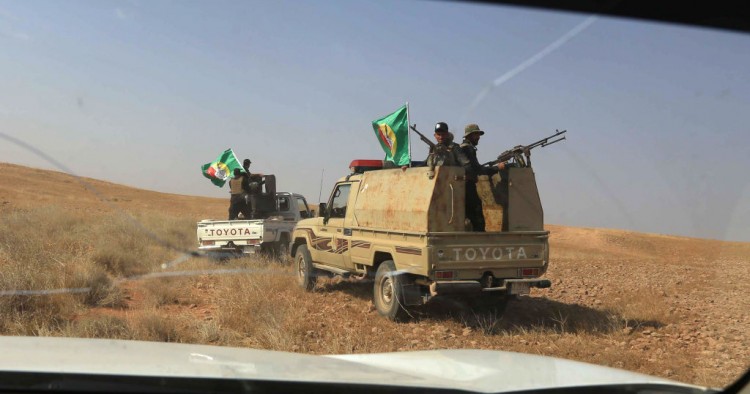 This piece was originally published by The Daily Star.

Iraq has been relatively calm in recent weeks. This could change following Mohammad Allawi’s withdrawal as prime minister-designate, but Iran’s proxies in Iraq are giving dialogue a chance before pushing ahead with what they say is revenge for the slaying of Qasem Soleimani, head of the Iranian Revolutionary Guard's Al-Quds Force.

After Allawi stepped down last weekend, Iraq’s Kataeb Hezbollah quickly made its opposition known to the naming of the country’s intelligence chief Mustafa al-Kadhimi as the next prime minister. A spokesman for the Iran-backed militia said on Twitter that Kadhimi helped the U.S. in its operation in January that led to the assassination of Soleimani and Abu Mahdi al-Muhandis, the de facto leader of Iraq's Popular Mobilization Forces.

Naming Kadhimi would be a declaration of war, Kataeb Hezbollah warned.

This may be what sparks the response of Iran’s proxies for retaliation against U.S. forces or its allies in Iraq.

Since the U.S. carried out the drone strike that killed Soleimani, Iran responded with missile attacks on Iraqi air bases that were housing U.S. troops in Irbil and Ain al-Assad. But on Jan. 5 – days after Soleimani was killed – Hezbollah’s Secretary-General Sayyed Hasan Nasrallah said that “resistance groups” would respond in their own way.

“Iran responds the way it wants, but that doesn’t stop the ‘Axis of Resistance’ from also responding,” Nasrallah said.

A senior Hezbollah source said this response was still on the cards, and that “this will take place when the time and place are right.”

Saying Hezbollah was patient and citing its fight against Israel, the source said: “This took 18 years in Lebanon [to force the Israeli withdrawal] and time would pass where we would kill one Israeli soldier every five months.”

Asked why no response had been carried out in Iraq yet by “resistance groups,” the source said, “we are giving negotiations a chance [for] a new government.”

Iraq has been without a government since the popular protests forced Prime Minister Adel Abdul-Mahdi to resign.

The Iraqi factions know what is in their interest, the Hezbollah source said, adding that they will decide when the time is right.

“We will wait for the new government to be formed, which we expect by the end of the year. Based on the next government’s decision to push ahead with the call for the expulsion of U.S. troops, you will see a response then,” the source said. He was referring to the Iraqi Parliament’s approval of a bill that called for foreign troops to leave the country after Soleimani’s killing.

Because this was signed between two governments (U.S. and Iraq), it does not need the approval of the legislative body, according to the source. “But this was their [Iraq’s] decision, so we respect it and will not oppose it.”

As for reports that Nasrallah or Mohammad al-Kawtharani, the Hezbollah representative in Iraq, temporarily taking over the lead role for Iranian proxies inside Iraq, the source said it was not entirely accurate.

Iraqi factions are comfortable with Kawtharani, a Lebanese citizen residing in Iraq and married to an Iraqi woman. He speaks the same Arabic dialect as the Iraqis and he had a close relationship with Soleimani coordination Iraqi militias’ activities.

“He uses the same curse words and slang used in Iraq. The leaders there are comfortable with him,” the source said.

In August 2017, Moqtada al-Sadr butted heads with then-PM Haidar al-Abadi, calling on the PM to disarm Al-Hashd al-Shaabi and integrate it into the Iraqi army. In 2018, after weeks of political tension, Sadr and Abadi allied.

At the time, Nasrallah spoke with Sadr and advised him to ease his stances. “Nasrallah doesn’t slap anyone’s hand, but he is seen as a respected, spiritual figure so they listen to his advice,” the source said when asked if Nasrallah and/or Kawtharani were taking the lead of Iraq’s proxies.

Kawtharani naturally meshes with the Iraqi group of men that includes Sadr, Allawi and other prominent figures in Baghdad.

Allawi lived in Lebanon in the late '70s, '80s and studied at the American University in Beirut.

Sadr regularly visits Lebanon and stays for months at a time. “He enters legally through Lebanon’s border crossing with Syria or the airport like any other visitor. The last time he was here for a few weeks, but we didn’t meet with him. Sometimes we meet with him and sometimes we don’t, even if he asks for a meeting,” the Hezbollah source said.

“These are all men that we have ties with dating back to the Saddam-era when there was oppression of Shiites,” the source said. He added: “We have these ties from many years ago and today it happens that they are in decision-making roles so it’s only normal for us to be in contact with each other.”

But the lead role on Iran proxies and militias is not one that Hezbollah can take up. “Soleimani had a training camp in Iran that was almost the size of Lebanon. He would also sleep in Beirut and have breakfast in Damascus, before sleeping in Baghdad the next night. There is no way Sayyed [Nasrallah] can do that,” the source said.

Apart from this, Al-Quds Force is its own entity and doesn’t need to count on anyone, the source said. “We have enough to deal with in Lebanon and Syria right now. That role [in Iraq] is automatically taken by Al-Quds Force and Soleimani’s successor. We will help in any way we can, but we certainly cannot take over that role.”

And this Al-Quds Force leader will, in cooperation with Iraqi militias, decide when and how to respond to Soleimani’s killing. “We’ve left this decision to the Iraqi factions because they know what’s best for them,” the Hezbollah source concluded.