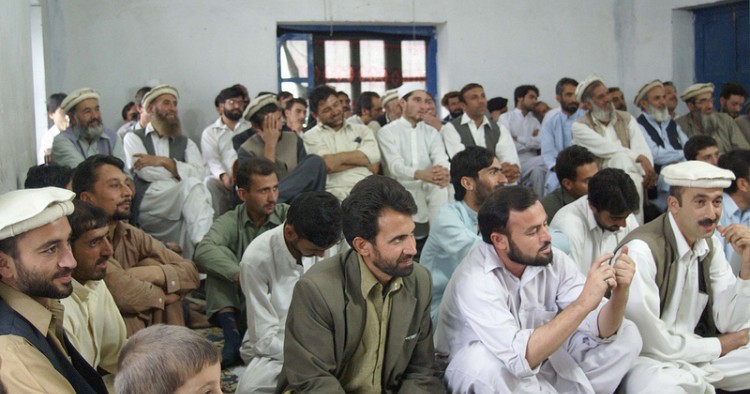 The attempted assassination of Malala Yousufzai by Tehreek-e-Taliban Pakistan on October 9, 2012, marks a milestone in the trajectory of Pakistan’s future. It has manifested the balkanization of Pakistani society along the lines of those who have been labeled in the popular vernacular in Pakistan as “liberals,” and those who claim ideological proximity with the reactionary religious ideology and demonstrate mistrust and disapproval of American policies instituted in the “War on Terror.” How this debate pans out between the two groups will mark the path to Pakistan’s future.

The attack on Malala is reprehensible not just because the act itself is barbaric, but also because the Taliban have justified it by claiming that the young girl was propagating “secularism.” Thus, while the medical assistance offered to Malala and the widespread sympathy and solidarity inspired by her bravery are encouraging, they are not enough. The need of the hour is to reclaim ideological space that is adroitly being captured by those who believe in reactionary religious idealism as a panacea for all evils, especially successive corrupt governments that have failed to provide for the needs of majority of population in Pakistan.

The Taliban and their apologists are molding the ideological debate surrounding the attack on Malala around two finely conceived points. First, that attacking Malala was necessary as she was promoting “secular” Western values, and thus was going to grow up and cause “fitna” — an Arabic word with connotations of upheaval and chaos. Hence, according to Taliban, just as the Prophet Khizr, while on his journey with the Prophet Moses, killed a child who was going to grow up and create “fitna” on God’s earth, it was necessary to kill Malala as she would have grown up and caused “fitna.” Second, they argue, that the furor of the West and “liberals” on Malala’s case is an attempt to distract attention from the innocent deaths of children killed in drone attacks, and that those who are condemning attack on Malala are in effect favoring and even supporting drone attacks in the tribal areas. Thus, they are more loyal to the West, than to their own brethren, and need to be targeted and silenced for this act of betrayal. In fact, Taliban have threatened to target Pakistan’s media outlets for their vociferous support to the young girl.

A cursory glance at the opinion coming out of Urdu press, as well as social forums shows that a vocal part of the Pakistani community has bought into the latter argument readily, even if they do not agree with the first reason. This is the key issue for policymakers and those who seek a moderate future for Pakistan. What is at stake is not just the life of young Malala, but the very existence and future of Pakistan, where calling for reason or questioning reactionary rhetoric justifies murder, even of a child, or silence over such an instance.

First off, in clear terms, an attack on Malala is an attack on the basic tenets of Islam, which have called it a duty of every man and woman to seek education. An often-quoted hadith calls it the duty of every Muslim, man or woman, to seek knowledge, even if it entails travelling to far-flung lands in its pursuit. Thus, in that frame of reference, Malala was not promoting “secular” values but rather fulfilling a religious mandate.

Second, that the Taliban equate themselves with the Prophet Khizr should be a point of concern for all Muslims, especially those who strictly follow Islamic teachings. Further, linking Malala’s tragedy to victims of drone attacks, while a smartly weaved linkage, is specious. It distracts attention from the fact that drone attacks in the tribal areas of Pakistan are being conducted to target al-Qa‘ida fighters, while Malala Yousufzai, who had nothing to do with any political agenda, was fighting for her right — protected both by religion and the constitution — to seek an education.

Thus, equating the attack on Malala to deaths of innocent children in tribal areas is a flawed argument. However, it is gaining currency in the broader Pakistani public, which has gotten into the habit of living in denial of being “al-Qa‘ida-ized” in a very subtle fashion. What the proponents of this argument fail to mention, is the use of children as child soldiers or suicide bombers, by the Taliban and al-Qa‘ida, as well as those children who die in suicide attacks. Are the lives of children who die in drone attacks expendable? Absolutely not. However, linking one with the other serves no purpose, and reeks of myopic denial in Pakistani society and clever political maneuvering by those who prefer the Taliban and al-Qa‘ida versions of Islam.

What is beyond doubt is that, if public outrage against the assassination attempt on Malala Yousufzai is splintered by questions and doubts amongst sections of the educated middle class and elite Pakistanis, at stake will not just be the legacy and voice of young Malala, but the very future of Pakistan. Malala’s fate continues to be in doubt, and the outcome of the larger public debate will set the tone for the direction the new Pakistan is heading.

If Malala is not safe in Pakistan, no woman is. Silencing women to prevent them from taking part in the evolution and growth of a society is central to the radical ideologies of religious extremists throughout time. Thus, an attack on Malala is not just a barbaric act; it is in consonance with the ideology of religious extremism that is rapidly gaining ground in Pakistan in particular, and the entire Islamic world in general. This is the reality that Pakistanis need to understand and be cognizant of. Nine and a half million young girls in neighboring war-torn Afghanistan have recognized the clear threat facing women in the region, why won’t Pakistanis? Now is the time to take honest stock of the dangers confronting Pakistan, and then act accordingly in light of our inner voice. At the end of the day, the future generations of Pakistan will have to bear the consequences of our silence or myopic buy-in.