Mergers and assassinations as Tripoli remains under militia control 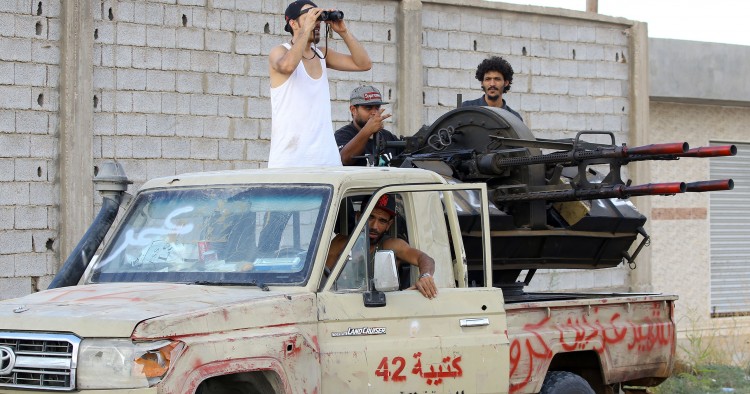 On Dec. 18, 2018, the seaport in Libya’s capital was the scene of a surprising yet deft maneuver orchestrated by the city’s four main armed groups, namely the Tripoli Revolutionaries' Brigade (TRB); Abu Salim’s Special Deterrence Force; the Nawasi Battalion; and the Bab Tajoura Brigade. Donning rarely seen official uniforms, members of the four militias gathered to announce they had joined forces to form a new entity known as the “Tripoli Protection Force.” A statement issued by the TRB later the same day tried to rationalize the move by explaining that it was motivated by a desire to consolidate security in the capital, avert future threats to citizens’ lives, and better protect private and public property.

This comes at a time when Libya’s UN-backed Government of National Accord (GNA) is seeking to implement new security arrangements in western Libya and to establish a status quo that would be conducive to stability in Tripoli. The imperative to implement new security arrangements came after the United Nations Support Mission in Libya (UNSMIL) negotiated a ceasefire with armed groups from outside the capital that had launched a series of attacks on the “quartet” of militias in Tripoli throughout the month of September 2018. Indeed, these external brigades (despite their disparate backgrounds and agendas) all perceived that, by assuming security functions in the capital, Tripoli’s armed groups had disproportionate access to opportunities for rent extraction and were gradually monopolizing access to state funds.

Though the GNA was unable to mediate between the warring parties, it did reshuffle its ministerial cabinet the following month, in an attempt to restore some balance in the security sector and prevent another flare-up. Fathi Bash Agha, who hails from the city of Misrata, was appointed to head the Ministry of Interior. He was tasked with restoring stability in western Libya and introducing security arrangements to curb the influence of Tripoli’s armed groups, despite the fact that the quartet of militias actually nominally operate under the ministry. Bash Agha’s appointment was also a political gambit on the GNA’s part to rein in forces from the city of Misrata, considered one of western Libya’s dominant military powers.

Although Bash Agha said he intends to introduce some form of security sector reform and disarmament, demobilization, and reintegration programming to transition from a system reliant on militias to a more formal security apparatus, he will be both financially and operationally constricted given the GNA’s reliance on armed groups. Indeed, following the ISIS attack on the Libyan Foreign Ministry on Dec. 25th, Bash Agha actually conceded that security arrangements in the capital had not improved.

Moreover, various actors in eastern Libya, such as the head of the self-styled Libyan National Army, Khalifa Hifter, as well as militia leaders in Tripoli may seek to strike alternate deals that would enhance their own role and relevance while undermining Bash Agha’s authority. Amid signs that Hifter is increasingly keen on a military push toward western Libya, the situation is conducive to the creation of a makeshift alliance between the Libyan National Army and armed groups that oppose the authority of the new minister of interior.

Following the clashes in the capital in September, the Tripoli quartet had displayed a more conciliatory approach towards external groups and appeared responsive to the security arrangements negotiated as part of the ceasefire. In accordance with the conditions of those arrangements, the four militias even handed over control of some of their headquarters in the capital. Although these actions may have been interpreted as concessions, they were merely attempts to buy time and prevent other armed groups from carrying out attacks while reorganizing internally to prepare for future clashes.

The “reorganization” strategy that Tripoli’s armed groups agreed upon was brutal and cold-blooded; it entailed getting rid of influential members that would oppose the quartet’s entrenchment or could contest leadership positions in the future. The implementation phase can be traced back to the return of TRB head Haitham al-Tajuri to Tripoli in October 2018. The mercurial militia leader and notorious wildcard was on a “mandatory leave of absence” in the UAE throughout the fighting in the capital in September. Upon his return, his leadership was contested by several individuals that held sway over an increasingly fractionalized armed group. In a rare move, he attempted to shore up his position as TRB leader with local communities by overseeing the disbursement of cash at banks and the delivery of medicine to hospitals in central Tripoli. At the same time, al-Tajuri also coordinated a series of assassinations of “now antagonistic” former comrades with Tripoli’s other militias, notably the Salafi-leaning Special Deterrence Force — murders that restored his de-facto leadership over a fragile TRB.

The fractionalization within the TRB coupled with the perceived external threats facing the quartet provided the rationale for their apparent merger into the Tripoli Protection Force. However, given their ideological differences and preference for preserving discrete zones of influence, the Tripoli quartet will likely maintain their respective chains of command and only coordinate when they need to do so.

Nevertheless, the announcement of the new joint Tripoli Protection Force not only epitomizes the exploitative behavior of armed groups in Libya but also the challenges facing both UNSMIL and the GNA’s new minister of interior. By using their nominal affiliation with the Ministry of Interior while exploiting the Presidential Council’s feeble hold on security, the quartet may succeed in compromising the UNSMIL-brokered ceasefire and the implementation of new security arrangements, undermining Bash Agha in the process. Security sector reform has not been at the top of the agenda in Libya in recent years, but if efforts to establish a viable security arrangement in Tripoli remain on the backburner, it may well lead to a repeat of the September clashes, with the likelihood that even more armed groups could get sucked in.