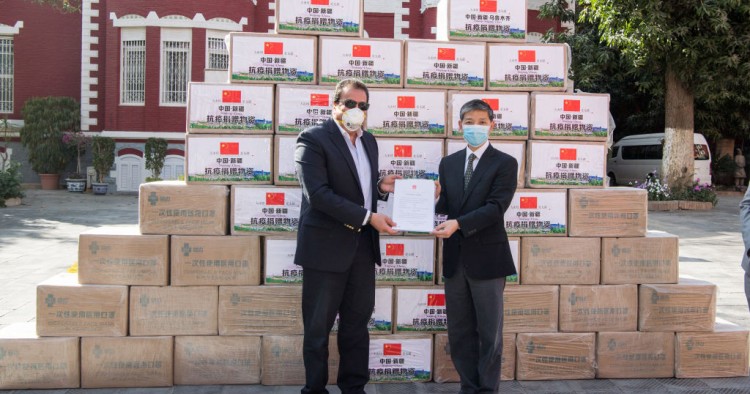 China and the Middle East have long-standing historical ties that have grown significantly closer in recent years, driven by rising levels of trade and investment, as well as a burgeoning political relationship. However, the outbreak of the COVID-19 pandemic, which spread from China to the region and the rest of the world, has ushered in a complex new dynamic in relations between the two sides. It has created an opportunity for solidarity and assistance, while also exacerbating existing challenges, chief among them the question of trust in China among Middle Eastern governments and peoples.

Perceptions of China in the Middle East before the pandemic

According to the 2019 Pew Global Attitudes survey, the perception of China in the Middle East, at least among the surveyed countries (Tunisia, Israel, Turkey, and Lebanon), is broadly positive. In Lebanon, Israel, and Tunisia, 60 percent-plus of respondents reported having a favorable opinion of the country, although the figure was much lower in Turkey (37 percent). The growing popularity of learning China’s language and history is another indicator of its positive perception in the region, as is the considerable attention paid to the visits of Chinese officials in the local media. Above all else, for some countries in the Middle East the emerging Asian giant is seen as a more attractive and relevant economic and political model and an alternative to the U.S., which has led the international order since the collapse of the Soviet Union in the early 1990s.

Since the outbreak of COVID-19, however, things have taken a turn for the worse when it comes to China’s perception in the region. Even in Iran, its main regional ally, China has been harshly criticized. Kianoush Jahanpour, the spokesman for the Iranian Ministry of Health, was critical of the way the Chinese authorities handled the outbreak and the data they provided about it to the world, describing the latter as a “bitter joke.” After coming under pressure from both Beijing and Tehran, Jahanpour quickly backpedaled, tweeting the following day that, “The support of China for the Iranian nation in difficult days is unforgettable.”

Across the region criticism of China has been widespread among the public as well, particularly on social media. In Morocco, police arrested a woman in early February after she published a viral video accusing a local Chinese restaurant of spreading the virus. In early March, a taxi driver in Cairo forced a Chinese man out of his car after he coughed. At the end of March, a resident of New Cairo called the police to report that a Chinese family was barbecuing snakes — a rumor that later exploded on Egyptian social media, leading to widespread speculation and anti-Chinese comments.

Many countries across the region, including Bahrain, Iraq, Jordan, Lebanon, Morocco, and Turkey, have also imposed restrictions on travel from China. Iran even suspended issuance of visas for Chinese citizens, drawing criticism from Beijing because of it. As a rule, however, the official line among MENA governments has been one of continued cooperation and dialogue with the Chinese. It seems that the desire to maintain good relations with China supersedes other considerations. This has doubtless been motivated in part by the medical assistance and aid China has provided to many countries, as well as the fear that Beijing will “remember” the countries that criticized or cut ties with it during this difficult period.

Following the outbreak of COVID-19 and the resulting change in the perception of China in the Middle East, Beijing has switched gears and employed new tools of influence. The Middle East is increasingly important for China, given its rich natural resources and strategic location on key trading routes. China has come to rely heavily on Middle Eastern oil, with almost half of its imports — 44 percent — coming from the region last year. The Middle East is also key to Beijing’s future economic plans, including the Belt and Road Initiative, as a crossroads for trade routes and sea lanes linking China to Africa and Europe.

Thus, China wants to maintain its positive perception among populations across the Middle East, not only as a goal in its own right, but also because Beijing needs to ensure it remains a trusted economic and political power. This is especially important during a crisis that has already done considerable damage to China's economic growth and impacted its perception globally. Without a stable supply of energy and the safe use of trade routes in the Middle East, China's economic and political position could be further undermined. A severe outbreak of the pandemic across the Middle East would paralyze China’s economic activity in the region, the consequences of which could be no less devastating for it than the pandemic itself.

Therefore, the Chinese government has invested considerable time and resources in channeling and controlling the public discourse on COVID-19, trying to establish a narrative that the pandemic is not a “Chinese virus,” as U.S. President Donald Trump and others have claimed. The Chinese leadership understands that the level of trust in it has been severely damaged by the pandemic. It is working hard to promote the narrative that COVID-19 could have erupted anywhere and that the Chinese regime has no unique responsibility for it and the way it has spread. As part of this effort, Beijing rushed to publish a book highlighting China’s war on the coronavirus and the assistance it has offered to other infected countries. The plan is to translate this book into many languages, including some Middle Eastern ones, and to distribute it among policymakers as well as the general public.

To back up the government’s narrative, China has also ramped efforts to provide assistance to countries across the region, sending medical teams and aircraft with equipment and supplies needed to fight the virus. At the beginning of March, it sent thousands of test kits and other medical equipment to Egypt. It provided Turkey with a “special drug” that, according to Turkish Minister of Health Fahrettin Koca, is claimed to have reduced recovery times among intensive care patients. In early April, China helped Israel acquire and ship essential medical supplies as part of an airlift operation organized by the Israeli Ministry of Defense, but many of the supplies were reportedly donated by Chinese citizens. In mid-April China donated 50 boxes of medical supplies with 100,000 surgical face masks to Oman’s Ministry of Health. These are just a few examples of China’s efforts to provide aid to the region, although in some cases the equipment in question has proven to be defective.

As these efforts are aimed squarely at improving China’s image and shoring up its soft power during the crisis, they have all been highly publicized and promoted on Chinese government news sites and social media. By mid-March China’s main news agency, Xinhua, had already put out a report about Beijing’s response to the pandemic in the Middle East. This report, as well as other similar ones, emphasizes China’s solidarity with the people of the region. Other reports have promoted disinformation in an attempt to deflect blame away from China. Ms. V, a China state TV anchor for Arabic-speaking audiences, claimed that, “It is clear that the virus in China was transmitted from abroad,” pointing the finger at the U.S. as the source. In Israel, the new Chinese ambassador rejected, in his first interview with a local newspaper, claims that China was the source of the virus and explained why Chinese investments in Israel need not be feared. In late March China's ambassador to Ankara, Deng Li, gave an interview to the Turkish media describing how his country had combatted the virus in order to help the Turkish government in its own efforts and show China’s solidarity with the Turkish people.

The spread of COVID-19 presents an unprecedented global challenge, as well as a unique political and diplomatic one for China. As the country of origin for COVID-19 and a rising power with a growing profile in the Middle East, China must work to restore trust in its “brand.” Beijing’s provision of emergency medical assistance and extensive media campaign across the region are driven by the need to safeguard its considerable interests in the Middle East and avoid long-term damage to its image. Without a stable supply of energy and the use of regional trade routes, China's economic and political position may be further undermined. Therefore, going forward the Chinese are likely to continue to provide medical assistance to the countries of the Middle East, and to continue to document and promote that assistance extensively, in an effort to improve their image in the region. At the same time, regional governments are likely to continue walking a fine line between blaming China for the pandemic and maintaining good relations with the Asian giant.

Roie Yellinek is a a non-resident scholar at the Middle East Institute, a Ph.D. student at Bar-Ilan University in Ramat-Gan (Israel), and a doctoral researcher at the Begin-Sadat Center for Strategic Studies. Adam Hoffman is a junior researcher at the Moshe Dayan Center for Middle Eastern and African Studies, Tel Aviv University, and heads the Middle East Desk at the crowdsourced consulting firm Wikistrat. The views expressed in this piece are their own.