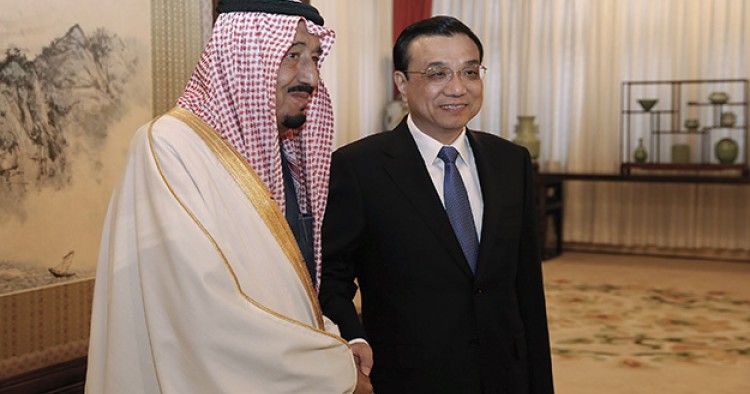 Chinese President Xi Jinping’s 2013 proclamation of the Silk Road Economic Belt (“One Belt, One Road”) and Twenty-First Century Maritime Silk Road initiatives provided an overarching framework for understanding China’s strategic priorities over the coming decade.[1] The land-based and sea-based Silk Roads will link Asia and Europe via the Middle East and Central Asia through a series of transcontinental railroads, pipelines, ports, airports, and other infrastructure projects. After decades of achieving double-digit GDP, the Chinese economy slowed to 7.4 percent in 2014 and faced excess capacity in the cement, steel, and aluminum industries. The Silk Road project, posited as a new driver of economic growth, will enable China to export excess capacity to developing countries in Asia and Africa. Xi’s message encouraging foreign countries to join the new Silk Road has been invoked in meetings with the leaders of Saudi Arabia, Iran, the UAE, Qatar, Turkey, Algeria, and Egypt.[2] This article argues that the Silk Road project in the Middle East reflects more continuity than change in Chinese relations with Middle Eastern countries. China continues to focus on enhancing trade and investment ties with the Middle East, while refraining from intervening in the region’s political affairs, except for the international negotiations on the Iranian nuclear issue.

The new Silk Road framework represents a continuation of pragmatic policies aimed at forging closer trade ties between China and the Middle East. The Middle Eastern countries that are likely to loom largest in China’s Silk Road visions are its current largest trading partners in the region: Saudi Arabia, the UAE, and Iran. The project will also aim to develop the already rapidly expanding trade relationship with Turkey, which grew from $1.44 billion in 2000 to $22 billion in 2013.[3]

China’s trade with Saudi Arabia, its largest trade relationship in the region, reached $72 billion in 2013.[4] Two-way trade between China and the UAE grew from $40 billion in 2012 to $46 billion in 2013.[5] Whereas China had a trade deficit with Saudi Arabia due to the huge quantity of oil imported from the kingdom, Chinese exports to the UAE surpassed imports from the country, reflecting the Emirates’ unique status as a strategic first destination for Chinese goods headed to the Arab world and beyond.[6] A valued market in its own right, the Middle East also serves as a critical bridge to Europe and Africa, and a Chinese scholar has pointed to the European Union market as the real prize sought by China through its Silk Road strategy.[7]

China’s trade relationship with Iran has developed despite international controversy over the nuclear program. Sino-Iranian trade increased from $36.5 billion in 2012 to $39 billion in 2013.[8] The vice president of the Iran-China Chamber of Commerce predicted that bilateral trade will reach $44 billion by the end of 2015, reflecting Chinese purchases of oil, petrochemicals and minerals, gas condensates, and industrial products.[9] Iranian media reported that Tehran and Beijing hope to increase the value of their trade to $60 billion by 2016 and to $200 billion in the next decade.[10]

China’s energy imports from the region remain strong despite its economic slowdown. Saudi Arabia and Iran are China’s major crude oil providers, and the PRC is both countries’ largest oil consumer. China’s crude oil imports from Saudi Arabia stood at 993,320 barrels per day (bpd) in 2014, down 7.9 percent from its 2013 level.[11] China’s crude imports from Iran averaged 549,250 bpd in 2014—an increase of nearly 30 percent from its 2013 level—as the PRC took advantage of low oil prices to build its strategic petroleum reserves.[12] In 2015, China’s crude imports from Iran reached 469,000 bpd in January and 532,000 bpd in February.[13]

Yet while the energy trade undergirds China’s strong economic ties with Saudi Arabia and Iran, the key to reviving China’s slowing economy lies in finding new markets for capital-intensive industries, such as construction. In the first half of 2014, China invested $6.8 billion in Saudi Arabia’s energy sector, $5.2 billion in its metals industry, and $1.9 billion in transportation projects, according to the Heritage Foundation’s “China Global Investment Tracker.”[14] The Arab Gulf kingdoms, with their continued political stability in the wake of the Arab Spring, remain relatively attractive places for Chinese investment in the region.[15]

In the first six months of 2014, Iranian projects received the second largest batch of Chinese investments, totaling $17.2 billion.[16] $11.6 billion was invested in the Iranian energy sector, $3 billion in metals industries, and $2.1 billion in transportation.[17] Chinese investments in Iran’s energy sector are notably larger than those in the Saudi energy sector, partially reflecting Saudi restrictions on foreign investment in its petroleum industry and the lack of need for outside financing given the kingdom’s wealth. Iran, on the other hand, has been keen to open its oil and gas sectors to foreign direct investment in efforts to expand its refining capabilities.[18] China has funded a number of petrochemical projects in Iran, reportedly providing $13 billion for Iran’s Sabalan, Lordegan, Bushehr, and Masjed Soleyman petrochemical projects.[19] Chinese state-owned firms have also expressed interest in the construction of Qom’s monorail and airport subway projects.[20]

After Saudi Arabia and Iran, the next largest recipients of Chinese investments in the first half of 2014 were Algeria ($15.4 billion), the UAE ($9.5 billion), Turkey ($9.1 billion), and Egypt ($8.4 billion), according to the Heritage Foundation.[21] A Chinese company has offered to build a nuclear power plant valued at more than $20 billion in Turkey, while a Chinese state bank has given Turkish State Railways a $770 million loan for upgrades and the construction of new high-speed railway lines.[22] China also invited Turkey—which has ethnic, linguistic, and historical ties to the Uighur minority group—to invest in Xinjiang, including development of a Turkish-Chinese industrial park in Urumqi. In other instances, Chinese companies have participated in the construction of Suez Canal Corridor projects in Egypt. However, Chinese oil investments suffered serious setbacks in Syria and Libya due to those countries’ political instability and ongoing conflicts.[23] Despite these geopolitical risks, Chinese companies still seek investment opportunities in volatile places in the region, even some that Western companies have decided to leave.[24]

As Chinese companies, encouraged by the government’s Silk Road visions, seek to expand their commercial dealings in Middle Eastern countries, the question remains whether Chinese leaders will develop a corollary policy of greater political engagement on regional issues. Thus far, the Silk Road strategy has not yielded tangible policy actions that indicate Chinese activism on political and security issues in the region beyond China’s responsibilities as a permanent member of the United Nations Security Council. Since taking office two years ago, Xi has not visited any countries in the Middle East or North Africa, instead dispatching Vice President Li Yuanchao and lower-level officials to the region, or meeting with visiting government officials in China. (A media report, however, suggests that Xi may visit Saudi Arabia later this year.[25]) Xi’s absence in the region stands in stark contrast with his rival, Japanese Prime Minister Shinzo Abe, who visited Egypt, Jordan, Israel, and the Palestinian Territories earlier this year.

Contrary to reports that tend to overemphasize the energy factor as the main driver of Chinese diplomacy in the Middle East,[26] China lacks direct strategic political, military, and economic interests in the region. The exception is Turkey, which plays a limited role in Chinese counterterrorism efforts targeting Uighurs. Despite its preference for political stability and the de-escalation of crises in the Middle East, Beijing has not sought to become deeply involved in major regional conflicts, such as the ongoing civil war in Syria or the collapse of the Israeli-Palestinian peace process in April 2014. Beijing’s reluctance to engage on these issues reflects a lack of direct strategic interests and the realistic assessment that China has at best a limited capability to effect change in the region. For example, China’s special envoy to the Middle East plays an information-gathering and consultative role, as opposed to a direct political role, in the Israeli-Palestinian peace process.[27] Instead, Beijing is concerned with safeguarding Chinese citizens and their assets in the Middle East, as evidenced by its evacuation and airlift of more than 35,000 Chinese citizens during the 2011 Libyan uprising.

However, in contrast to their generally hands-off approach to political controversies in the Middle East, Chinese leaders are heavily invested in the negotiations on the future of Iran’s nuclear program. On April 2, 2015, the P5+1—the United States, United Kingdom, France, Germany, Russia, and China―and Iran announced a political framework outlining key aspects of a comprehensive joint plan of action to be negotiated by the end of June. If a final deal resolving key technical issues is agreed upon by June 30, Beijing will be able to claim a diplomatic victory, not to mention strengthen relations with the United States and other major powers. Chinese commercial interests would also benefit from a nuclear deal, as sanctions on Iran have hurt China’s sizable investments in the country.[28] From the Silk Road policy perspective, China wants to do more business with Iran and not be subjected to international political and economic constraints. Hua Liming, the former ambassador to Iran, said China and Iran “are historically important to the ancient route and will inevitably become the major countries in revitalizing the past glory of the road.”[29]

The Middle East’s main role in China’s Silk Road initiatives is to provide new markets and opportunities for China’s excess industrial capacity. Bilateral trade between China and Middle Eastern countries—in particular the GCC countries, Iran, and Turkey—are expected to increase, along with Chinese investments in infrastructure projects throughout the region. The Silk Road projects are commercially driven and do not require an increase in China’s activism on regional political and security issues. Indeed, the Silk Road initiative has not altered China’s basic strategic calculus in the region, nor has it produced policy shifts on major regional issues. Thus far, Beijing continues to influence regional issues from its seat on the UN Security Council and through the P5+1 talks on the Iranian nuclear issue. Unless Chinese leaders begin to view the Middle East region as directly tied to China’s strategic interests, the Silk Road strategy, as applied to the Middle East, will continue to focus on doing and expanding business as usual.

[1] These initiatives were announced in September and October 2013, respectively.