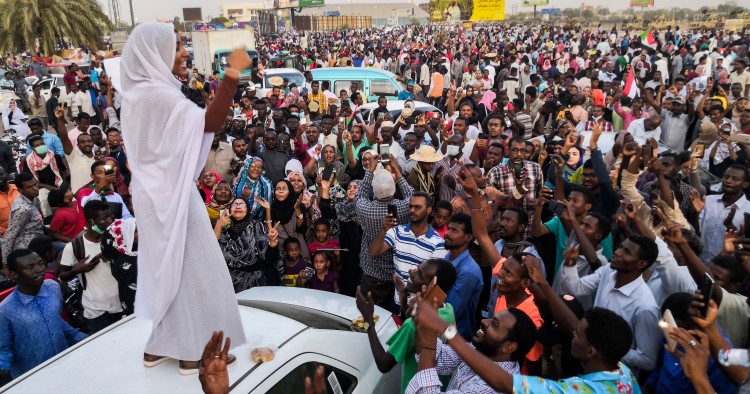 In this week's Monday Briefing, MEI experts Paul Salem, Jonathan M. Winer, Robert S. Ford, Mirette F. Mabrouk, and Charles Schmitz provide analysis on recent and upcoming events including the current uprisings in Algeria and Sudan, General Hifter's effort to take Tripoli, the hirak protest movement in Algeria, the strategic partnership between Egypt and the U.S., and cracks in the coalition of President Hadi in Yemen.

The current uprisings in Algeria and Sudan share many similarities with those of 2011: A focus on national, not external, issues; high frustration with socio-economic and governance deficiencies; a demand for not only the removal of the long-ruling dictator, but the transformation of the political order toward elected and accountable government, rule of law, and social justice.

They also share with their predecessors a spontaneous nature, led by youth, women, and civil society, not by the political opposition; and a lack of unity or clarity about the details of the political or socio-economic system — or the transition process — that they want to see put in place.

What differs from 2011 is that these uprisings were not part of a region-wide wave of wild optimism and revolutionary contagion; nor are they attracting the international attention that the events of 2011 did. Protestors today have also drawn some lessons from the past revolts: They are more wary of the army and are not leaving the streets any time soon; and they are aware of the risks of revolution turning to conflict, and hence are adamant about maintaining unity and peaceful protest.

But all is still uncertain about the two countries’ near future, and to a large degree that future is in the hands of their militaries and ancien-regime elites: Those elites could opt for real transition, as in Tunisia, or a temporary and false one, as happened in Egypt. The option of confrontation, as happened in Libya and Syria, seems, happily, to have been avoided.

What might be most important, though, and of most concern to champions of the counterrevolution that was put in place after 2013, is that people, in their millions — even after the negative experiences in some Arab countries which ended in state collapse and civil war, and after renewed waves of repression in others — did not hesitate to take to the streets in defiance of their governments when they felt the necessity to do so. So, no, Arab publics have not returned to a cowed position, and their empowerment will continue to challenge authoritarian systems.

Foreign support a wildcard in Libya

After General Khalifa Hifter’s initial gambit to take Tripoli failed, he spent last week in pilgrimages to Moscow, meeting the minister of defense there, and to Cairo, where he met President Abdel-Fattah el- Sissi. Now, as both Hifter’s army and Tripoli’s defenders have consolidated forces in preparation for renewed battle, one major question is whether outside powers will covertly support Hifter’s effort to take the city.

Libyan Government of National Accord (GNA) Minister of Interior Fathi Bashagha has helped bring together formerly divided military groups from Tripoli, Misrata, and other Tripolitanian cities that have united to oppose Hifter. Few believe the current pause in fighting will last, or that Hifter and his forces will simply withdraw from the area absent suffering substantial defeats.

Hifter has previously engaged in extended sieges in Benghazi, which took three years to fall to his army, and in Derna, with help along the way from the UAE, Egypt, and France. In both cases, Hifter relied in substantial part on air power and intelligence obtained from his foreign supporters, as well as on financial support in the form of some $10 billion in counterfeit Libyan dinars printed and delivered by Russia. Meanwhile, the disparate Tripolitanian militias are fighting not only for their lives, but also for their livelihoods through continued access to Libyan state revenues, an important further motivator for resistance.

France and the UAE have joined the U.S., UK, and Italy in calling for a halt to Hifter’s efforts to take Tripoli. The question becomes whether these two countries and Hifter’s other supporters (Egypt, Russia, and Saudi Arabia) will now stay out of the conflict to allow Libyans to determine their own fate, or gamble on helping Hifter take over the country by force. For now, efforts at negotiated settlement will have to await the results of the next phase of the war Hifter has chosen to initiate.

Algeria at an impasse

The Algerian political crisis is deepening. Army Chief of Staff Gen. Gaid Salah insisted on April 10 that the street protest movement must respect the constitutional process now underway under control of the interim government. That government plans presidential elections on July 4. To contain the protest movement, the government also has started cracking down. Security forces sought to impede access by protesters from outside Algiers trying to join the huge protest marches in the capital last Friday, April 12. For the first time security forces used water cannons and tear gas widely in downtown Algiers. The arrest of several dozen activists and harassment of four women detained by the police dominated Algerian media headlines on April 14. On Monday, April 15 the government blocked a major human rights lawyer from delivering a planned speech at a university outside of Algiers.

The protest movement, called the hirak, is not deterred. The huge Friday demonstrations in Algiers were joined by massive protests throughout Algeria. There are demonstrations by students, public-sector workers (including some energy-sector workers), and other unionists every day across Algeria. Even as the government carefully starts cracking down, its strength is questionable. Angry crowds in recent days chased interim government ministers away during public visits. A judges’ union has pledged not to undertake legal oversight of the July 4 election, and municipalities in two governorates have declared they will not hold the election at all. The national veterans organization, a pillar of regime support in the past, has urged the government to heed the hirak’s demand for a massive government overhaul. So far, the government and the hirak are at an impasse. Gen. Salah is expected to make another national speech on April 16, and next Friday’s marches will be an indicator of whether the crisis can stay mostly peaceful.

Now that the dust has settled after Egyptian President Abdel-Fattah el-Sissi’s visit to Washington and meeting with President Donald Trump, it may be possible to examine any possible takeaways.

There were a spate of Egypt-related events around town, largely focused on upcoming controversial constitutional amendments. If they pass, and there is little reason to believe they will not, the amendments will introduce a swathe of changes, among them the hobbling of the judiciary, an increased role for the military, and the possibility of the current president being able to remain in office for an additional two terms of six years each, carrying him through 2034. There had been much talk that Sissi was in town to meet with Trump to shore up support for the amendments. That assessment was highly unlikely. While Egypt places a high premium on its relationship with the U.S., and is often willing to discuss and cooperate on international issues, or those with international ramifications, it is not in the habit of vetting domestic developments, no matter how controversial.

The official White House statement on the visit mentioned “strengthening the strategic partnership between the United States and Egypt and building on [U.S.-Egyptian] robust military, economic, and counterterrorism cooperation … and shared priorities in the region, including enhancing regional economic integration and addressing ongoing conflicts.” While the statement has a distinctly generic flavor, there were two concrete developments that did come about.

The first was Egypt’s withdrawal from the Middle East Strategic Alliance (MESA), a proposed, U.S.-led effort to form what’s been referred to as an “Arab NATO” – a political, economic, and security alliance between Bahrain, Egypt, Jordan, Kuwait, Oman, Saudi Arabia, Qatar, and the UAE. Egypt informed the other participants ahead of a meeting in Riyadh just before Sissi’s visit to Washington. Reuters, which broke the story, quoted a source as saying that Egypt, among other concerns, “doubted the seriousness of the proposition, hadn’t yet seen a blueprint, and [was worried about increasing tension with Iran].” The current Egyptian administration is significantly more wary of potentially problematic international engagement than previous ones might have been. One of the most obvious examples is Egypt’s firm refusal to deploy any troops in the Yemen conflict despite serious Saudi efforts at persuasion. While the other MESA participants are currently still involved, it will be difficult for such an alliance to achieve its full potential without Egypt, the region’s most populous country with the largest standing army.

On Monday, McClatchy reported that the Trump administration had asked Egypt for observer status at the newly minted Eastern Mediterranean Gas Forum. Founded by Egypt, the organization includes Cyprus, Egypt, Greece, Israel, Italy, Jordan, and Palestine, and it was obvious at its outset that it might be attractive to European countries currently dependent on Russia for their gas. Apparently, the Trump administration has now caught on as well.
@mmabrouk

The convening of half the Yemeni Parliament in Seiyun was meant to bolster President Abed Rabbo Mansour Hadi’s legitimacy but instead revealed gapping cracks in his coalition. After Houthi leaders announced elections to fill the empty seats of Parliament in Sanaa, Hadi’s side quickly countered with an announcement that Parliament would convene in Seiyun, Hadramawt with a quorum of 145 members out of 301 seats. (Parliament was last elected 16 years ago in 2003 and many members have since passed.) The other half of Parliament sits in Sanaa under Houthi control, where Houthi Prime Minister Abdel-Aziz bin Habtour, former governor of Aden, called for the new elections.

Seiyun, in the sparse interior of Hadramawt, is controlled by troops commanded by Ali Mohsen al-Ahmar and backed by Saudi Arabia. It is one of the few places that Hadi’s forces control in Yemen, and Saudi troops rolled into town to ensure that Emirati-backed forces on the coast would not interfere. Hadi’s government formally sits in Aden, the temporary capital where logically Parliament would be convened. However, the UAE and its allies in the south opposed the convening of Hadi’s Parliament because it represents northern forces allied with the Islah Party and elements of Ali Abdullah Saleh’s former ruling party, the General People’s Congress, hostile to the south, a challenge to southerners allied with the UAE that control all the south except Seiyun. The newly elected head of Parliament, Sultan al-Burkani, and the head of the announced political coalition, Rashad al-Alimi, are longtime stalwarts of Saleh’s old regime. Southerners noted that while Hadi was saved in 2015 by southerners and his government at the time was filled with them, he now relies upon northerners. Indeed, the parliamentary leadership in Seiyun and Hadi’s government today are largely the same people that waged war on the south in 1994. While there is plenty of grumbling in the south about Emirati behavior, Hadi’s Parliament in Seiyun offers only more bitterness and division.