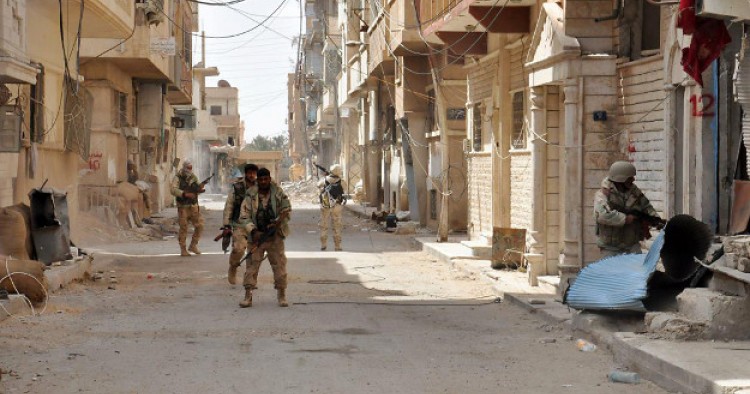 The capture of Palmyra is an invaluable opportunity for the Assad regime and Russia to now proclaim themselves as capable and willing partners in the fight against ISIS. But we must not forget that the Assad regime purposefully ignored ISIS gains in Syria for nearly 18 months—April 2013 to August 2014—as they proved an effective counterweight to the mainstream opposition. There is also bountiful evidence of the Assad regime’s deep and decades-long complicity in bolstering ISIS and its predecessor movements, for the purpose of manipulating them into shaping Syria’s domestic and foreign policy agendas. While there can be no doubting that ISIS’ loss of Palmyra represents a substantial strategic blow to their operations in Syria, this is the Assad regime’s first major victory against the group—after its presence on its territory for 3 years.

Events in Palmyra will also affect the viability of the political process in Geneva. Russia’s intervention has fundamentally transformed the balance of power on the ground and for the first time since mid-2013, the Assad regime is sitting comfortably in Damascus. Having recaptured Palmyra in a widely reported military operation conducted with Russian support, there is now no reason at all for Bashar al-Assad to even get close to considering a political transition. The next round of Geneva talks are scheduled to begin on April 11. Not only will this almost certainly be delayed, but the prospects for any progress on the substantive issue of political change look slim to none.

Ultimately, a sustainable long-term battle against terrorism in Syria will only be possible with the Assad regime having departed as part of an internationally-facilitated political transition. ISIS continues to benefit from the widespread disenchantment Syrians feel to their political system and leadership, not to mention its government’s brutally repressive response to protest and its committing of numerous war crimes. Even more significant is the effect of Assad’s survival upon the future of al-Qaeda in Syria. In this case, by proclaiming itself specifically as a revolutionary movement fundamentally opposed to the Assad regime, al-Qaeda has sealed its future in part to that of Bashar al-Assad. Should one remain, the other will invariably survive also.

The Battle for Mosul
Paul Salem, Vice President for Policy and Research

The fight for Mosul will be long and hard. The city is almost completely surrounded: the peshmerga have surrounded the city from the west, north and east, and Iraqi security forces have been moving to secure the southern reaches. But even when the circle is completed, it will still take many difficult months to dislodge ISIS from the city. The battle for Tikrit took two months; the battle for Ramadi, four. And these were much smaller towns with many fewer ISIS fighters. The battle for Mosul proper might begin in 2016, but will easily drag into 2017.

The politics of the campaign are complicated. The Iraqi army has to coordinate with the Kurdish peshmerga, with whom relations are distrustful and tense at best. It also has to coordinate with local tribal and communal armed groups that are key to giving the campaign a local liberationist aspect. Meanwhile, the Abadi government in Baghdad, which is supposed to be overseeing this entire campaign, is under tremendous political pressure from parliament, the Sadrists and other Shiite political factions. Abadi is being pushed to announce a new cabinet by this Thursday or face a vote of no confidence in parliament.

The United States has played a positive role in the campaign for Mosul, assessing correctly that the Iraqis have to take the lead, but also providing critical training, intelligence and air support, and helping coordinate between Baghdad and Erbil. Washington also needs to stand ready, along with coalition allies, to provide urgent assistance as more of the Mosul area is liberated. The Islamic State is losing territory in Iraq and Syria, but expanding affiliates in Libya and other parts of Africa, and striking soft targets in France, Belgium, Turkey and elsewhere. As most of its revenue comes from extortion in territory it controls and its recruits from a record of successful advances, loss of territory likely puts the jihadists in a tight spot. Momentum matters.

Hitting soft targets is cheap, requires few people and is relatively easy to plan and execute. Europe is readily accessible from the Middle East and houses lots of poorly integrated and marginalized Sunni Muslims. Prisons there, and elsewhere, appear to incubate terrorists; witness the brothers who participated in last week's Brussels attacks. Europe, where internal borders have been weakened without a concomitant strengthening of external borders, can expect more attempts by terrorist groups to kill and maim ordinary civilians as well as security forces.

The United States is not immune, but has advantages: two large oceans, toughened intelligence and law enforcement since 9/11, and a Muslim population thought to be better integrated than in Europe. Homegrown terrorists, many non-Muslim, have had more success here than foreigners. The charged political atmosphere of the presidential primary campaigns could, however, generate resentments and incentives for spectacular attacks. ISIS would surely not pass up a good opportunity to demonstrate its reach and strike against Americans and American interests. Donald Trump told The New York Times over the weekend that, if elected, he might halt purchases of oil from Saudi Arabia and other Arab allies unless they commit ground troops to the fight against the Islamic State or “substantially reimburse” the United States for combating the militant group.

These remarks are the latest statements indicating the highly transactional view Trump takes of U.S. foreign relations, especially with Saudi Arabia. Strikingly absent in his comments is any analysis of the U.S. or Saudi national interests that have buttressed relations for 70 years. As he often has pointed out, he would feature in his foreign policy the techniques of “The Art of the Deal,“ the title of his book on negotiating. In this vein, he also criticized Obama’s Iran nuclear deal this past week because the U.S. delegation did not walk away several times.

Apart from negotiating strategy, Trump’s ideas are challengeable on substance. At a minimum, he should assess what leverage the United States gains by threats of halting oil purchases from Saudi Arabia and the likely consequences of deploying Saudi or other Arab troops to fight the Islamic State. A definition of diplomatic disaster is ill thought-out ideas rudely implemented.