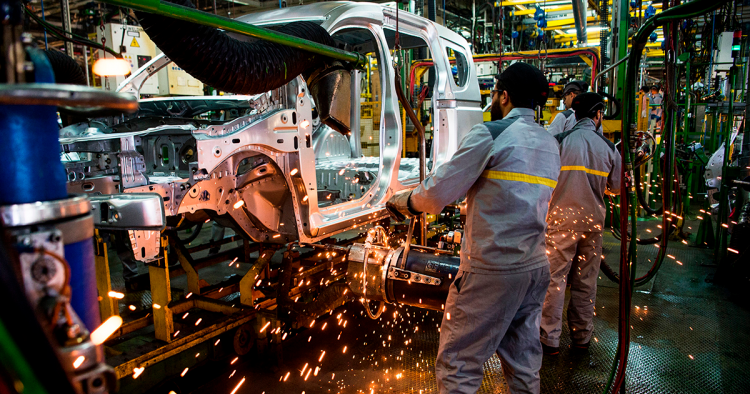 On Aug. 25, 2021, Stellantis announced that its German auto manufacturing subsidiary Opel would begin electric vehicle (EV) production in Morocco. The German automaker's Rocks-e model, an upgraded version of Citroën's Ami EV microcar, will be the first all-electric, passenger car to be manufactured in North Africa. Opel will produce the vehicles in Kénitra at the plant of its sister company Peugeot, which the latter opened in 2019 prior to the 2021 merger of Peugeot and Opel's parent company Groupe PSA with Fiat Chrysler to form the multinational conglomerate Stellantis.

Opel's new two-seater EV is also a product development milestone for Morocco as the Rocks-e model was developed at the Morocco Technical Center (MTC) in Casablanca, the design and engineering R&D laboratory originally founded by Groupe PSA. While EVs can cost more than their internal combustion engine (ICE) counterparts, MTC's improved design has helped Opel to minimize production costs to reduce the retail price of the Rocks-e to possibly as little as $7,000. Designed as a carbon-free urban mobility solution, Opel is looking to initially market the Rocks-e in major European cities, making the vehicle available for order in Germany from autumn 2021 and then in other European markets during 2022.

Opel's commencement of EV production in Morocco represents nimble market timing following the European Commission's July 2021 call to phase out all ICE vehicles in the European Union by 2035 as a centerpiece of the Union's European Green Deal. Several northern European countries, taking matters into their own hands, had already adopted measures requiring all cars to be zero-emissions vehicles by 2030. However, the advent of EV production in Morocco was not entirely unexpected. As noted in a previous MEI publication, European semiconductor manufacturer STMicroelectronics' recent inauguration of a microchip production line for EVs in its Bouskoura plant on the outskirts of Casablanca put Morocco on the fast-track to host EV production.

With the capacity to produce over 700,000 vehicles per year, Morocco's automotive industry is the undisputed king of vehicle manufacturing in North Africa. Yet prior to Opel's announcement, Egypt had been poised to leapfrog Morocco to become North Africa's first electric car producer and thereby emerge as the region’s next leading automotive manufacturing center. In a major breakthrough for Cairo, Chinese automaker Dongfeng signed a framework agreement in January 2021 with the moribund Egyptian state-owned El Nasr Automotive Manufacturing Company to jointly produce electric vehicles in Egypt. One of the "Big Four" of China's automobile industry, Dongfeng sold 1.13 million vehicles in 2020. The agreement between Dongfeng and Nasr, whose facilities had been dormant for 11 years, calls for 55% of vehicle components to be manufactured locally.

Dongfeng and Nasr conducted technical tests on the Chinese manufacturer's E70 model during summer 2021 to determine the design modifications required by Egyptian driving conditions. The Chinese-Egyptian joint venture plans to sell the new model in Egypt and regional markets as the Nasr E70. Aiming for an annual production capacity of 25,000 electric cars at Nasr's manufacturing facilities, production is slated to commence in mid-2022. In contrast to Opel's approach, the Nasr E70 will be priced at $18,600, likely making the Egyptian government and corporate fleets, as well as taxis, the primary initial market for the Nasr E70.

By jumpstarting Morocco's entrance into EV manufacturing, Opel's EV production also helps preserves Europe's leading position in Morocco's automotive manufacturing value chain, originally formed by the establishment of Groupe Renault and Groupe PSA's manufacturing plants in Morocco along with the approximately 200 international suppliers operating their own local manufacturing facilities to support those plants. Among those suppliers having integrated into the European-led value chain are Chinese firms such as CITIC Dicastal, which opened a $400 million plant in Kénitra to supply aluminum cast components to Peugeot's factory.

In 2017, China’s electrical vehicle manufacturer BYD Auto inked a deal to build its own EV production plant in Morocco, aspiring to become the country's third automaker. But the Chinese attempt to create an independent automotive manufacturing value chain in Morocco has been mired in delays and the outcome remains uncertain. A successful run for Opel would likely spur the production of EV brands owned by Peugeot or Renault. Peugeot already manufactures its ICE, 5-door hatchback Peugeot 208 in Kénitra and could switch with relative ease to producing the all-electric e-208 model that uses the same chassis. In June 2021, Renault signed a strategic cooperation agreement with STMicroelectronics for the supply of electric and hybrid vehicle advanced power semiconductors, raising the prospect that STMicroelectronics’ Moroccan autochip production could eventually supply the manufacturing of EV models in Renault's Morocco plants.

Morocco as an EV gateway to West Africa

The intensifying competition among North African nations, such as Morocco and Egypt, along with their foreign manufacturing partners to establish EV production in the region also stems from North Africa's position as a gateway to the rapidly expanding car markets in Sub-Saharan Africa, famously dubbed by a Bloomberg News article as the "last frontier for car makers on the hunt for growth." Although initially marketing to Europe, Opel's Morocco production line could sell the affordable Rocks-e model in West African markets, the biggest prize of which is Nigeria — Africa's most populous country with a driving-age population of about 99 million. In 2019, Nigeria imported 1.3 million vehicles, but assembled only 14,000 vehicles locally per year. With its small size and built-in charging cable, Opel's Rocks-e offers anywhere charging options that make it appealing for mobile phone-based ride-sharing services that are increasingly becoming the leading mode of consumer adoption in Nigeria and other Sub-Saharan Africa auto markets.

Morocco's “first in North Africa” electric car production could provide the kingdom and its European partners first-mover advantage in the expanding car markets of Africa's rapidly urbanizing regions south of the Sahara.

Professor Michaël Tanchum is a non-resident fellow with the Middle East Institute's Economics and Energy Program. He teaches at Universidad de Navarra and is a senior fellow at the Austrian Institute for European and Security Policy (AIES) and visiting fellow in the Africa program at the European Council on Foreign Relations (ECFR). The opinions expressed in this piece are his own.