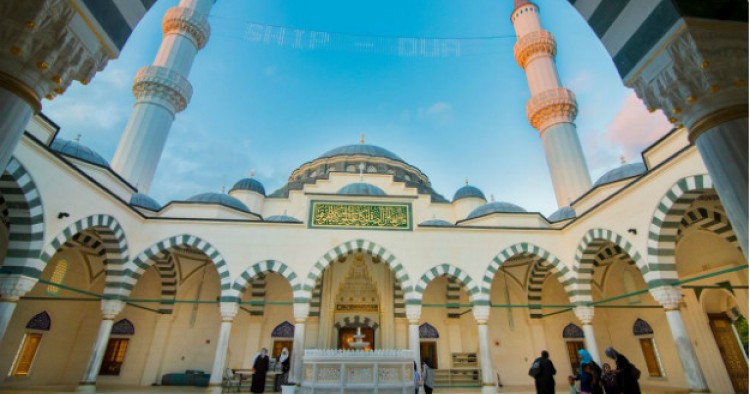 Something is different about Greater Washington’s new Islamic center in Lanham, Maryland, which recently opened after several years of construction. It boasts an aquatics hall complete with a swimming pool for doing laps and a traditional Turkish bathhouse with separate sections for men and women. It has outdoor tennis courts, a chess club, and several guest villas inspired by 16th century Ottoman architecture. A female chaplain is already on staff, ready to issue fatwas alongside her male colleagues.

Named the Diyanet Center of America (D.C.A.) because it receives funding from the Turkish government’s Presidency of Religious Affairs (Diyanet Isleri Baskanligi), it is already one of the largest Islamic centers in America. Perhaps more significant than its 15-acre campus, which is the size of over a dozen football fields, D.C.A. will potentially establish itself as one of the most visible religious institutions in the United States, poised to influence perceptions of Islam in America in a measured and deliberate way.

But to clarify, this is not an attempt to introduce a “liberal” Islam. Unlike numerous grassroots movements in the United States to “liberalize” Islam with less conventional practices like having gay imams, creating mixed-gender spaces for worship, or exempting women from having to cover their hair inside the mosques, D.C.A. offers no such concessions.

On the contrary, D.C.A. is very much a slice of the institutionalized Islam of modern-day Turkey transported onto American soil. This also means that just like in Turkey, D.C.A. will show deference to the secular state under which it operates.  As such, it will not act independently of the state by performing polygamous marriages, granting verbal divorces, or solving intracommunal disputes with Shariah-based tort rulings.

When I asked whether D.C.A. is part of Turkey’s new face to the world—the vision of an Islamist government that has been anything but bashful about challenging Turkey’s secular red lines—D.C.A.’s overseer, Dr Yasar Colak, demurred.

Speaking both as a trained imam and the social and Religious Affairs Counselor at the Turkish Embassy, Colak stated, “We have no intention of exporting our ideology to the world. But we wish that people living across the world have a chance to learn our own understanding of Islam, our practices and experience, developed throughout the years in Turkey.”

D.C.A.’s opening coincides with another major development in the discourse on Islam in America: the accreditation of Zaytuna College in Berkeley, California—the first Muslim liberal arts college in the United States.

Zaytuna co-founder Hamza Yusuf was more forthcoming about the college’s mission and the role he wants it to play in the post-September 11 discourse on Islam in America.  “We’re at a crossroads. If we’re not able to assuage fears of average Americans that Islam is not on trial here, that guilty perpetrators of these terrorist acts are not informed by Islam, but by ideologies co-opted by Islam, for me that’s the real challenge.”

“ISIS and al-Qa‘ida came out of [the Saudi] Wahhabi tradition. And Saudi Arabia needs to reform its educational material because, on the one hand, it teaches [Muslims] to obey their ruler; yet on the other hand it allows them to say: ‘Oh, the ruler is not practicing Islam, so I don’t have to obey him.’ And I certainly don’t want that kind of Islam in America,” he added.

Throughout the United States many mosques and Muslim communities have protested being subject to surveillance by local and federal authorities under the pretext of the war on terrorism. Simultaneously, many within the American Muslim community have themselves become wary of Wahhabi ideology. Perhaps out of fear that such an affiliation, however inadvertent, will land them on the F.B.I.’s watch list. Worse yet, many fear that their impressionable children could be seduced into consorting with the wrong crowd and end up adopting jihadist ideas.

Muslim countries manage the threat of radicalization by exercising various degrees of control over mosques and jurisprudence. In the United Arab Emirates, where most Emiratis eschew Wahhabism in favor of more moderate interpretations of Islam, religious authorities issue the weekly Friday sermon and distribute it to imams so worshippers hear the same general message. The government of Abu Dhabi, the wealthiest of the seven emirates, has also invested tens of millions of dollars into a fatwa center. Muftis there answer queries from all over the world about the minutiae of Islamic practice, issuing decrees in a half-dozen languages in accordance mainly with Maliki and Shafi‘i legal schools (as opposed to the more puritanical Hanbali school, from which Wahhabism derives). Countries like Jordan and Egypt also control religious expression in this centralized way.

In the United States there is no official oversight of the jurisprudence or language used in sermons. Imams are technically at liberty to preach anything they choose.  This has been frustrating for some within the Muslim community who find themselves at odds with their local mosque. Among the Arab American community, for example, many parents want their children to learn Arabic, a service usually available at low or no cost at many mosques. However, it is almost impossible to find a mosque that offers Arabic as a language course as opposed to Islamic studies programs delivered in Arabic. It is precisely this that D.C.A. intends to avoid.

“Sometimes [mosques] are misusing the opportunities they have. They invite people to a language course and they teach them something else,” said Dr Colak. “If you open a class to teach Arabic, you have to teach Arabic only. You should not impose your understanding of Islam. Otherwise you’re exploiting people.”

Colak added that D.C.A. will offer secular language courses in Arabic and Turkish. Islamic studies will also be offered, but in separate classes. D.C.A. also has plans to work with Zaytuna College to train future imams.

As with other religions, Islam in America will never become institutionalized by the state. But the Diyanet Center of America and Zaytuna College together might come closest to creating something like an American brand of Islam in much the same way that Islamic societies from China to Spain organically diverged over the centuries.