Mostafa Fathi’s The World of Boys: The Shabab Literature Movement of Egypt and Breaking Taboos

It is in this capacity of man to receive another man’s expressions of feeling and experience those feelings himself, that the activity of art is based.

Egypt’s youth face a dilemma: caught between a purported Clash of Civilizations and a society jellied in the ideology of absolutes. The Egyptian government is oppressive and supported by many Western governments; Society is growing increasingly conservative, the population is ever booming, and economic disparities grow even wider. Behind broad categories and divides such as the Muslim Brotherhood, the National Democratic Party, Christian vs. Muslim vs. Baha’i, regional instability and war, young Egyptians are exploring the activity of art.

Few venues remain open for one to express the trials and tribulations of growing up in the Middle East’s most populous country. But the voice of Egypt’s youth is finding its place in literature. Generally known as Shabab [Youth] Literature, this movement has increased its presence in the Egyptian book market. The Shabab literary movement is ecumenical, mixing traditionally written Modern Standard Arabic [Fus-ha], Egyptian Colloquial Arabic (‘Amiyya), and short simple sentences to narrate the story in a familiar tone, as well as to best convey the voice of conversation and the effervescence of the Egyptian dialect; Shabab dialogue is exclusively in ‘Amiyya. Therefore, reading becomes a movement.

What Ann Charters notes in her introduction to On the Road by Jack Kerouac, is also relevant to The World of Boys: The intended effect of such “kickwriting” prose facilitates the dialogue of the author as outsider in his own society, seeking a place and developing an identity. In interviews, Shabab authors confirm that their voice is a reflection of displacement and dismay, watching many of their contemporaries fall victim to youthful malaise and generational ennui. Writing helps them express this frustration. Breaking free of traditional literary styles facilitates artistic space in which one can deal with troubles and taboos. Thus, a type of catharsis develops.

The World of Boys by Mostafa Fathi is a socio-literary experiment. The author uses the spontaneous and deliberate prose of the Shabab movement in order to formulate a dialectic for expressing frustration at discrimination, generally, and breaking a new taboo, homosexuality, in Egypt. Phrases such as “hungry looks for homosexual love” seem awkward enough in English (p. 21); however, they are even more uncomfortable in Arabic. Nevertheless, there are no equally effective substitutes that discuss the topic and remain true to the prose. As Mr. Fathi breaks taboos, he also attempts to create new ones. For example, writing a book about homosexuality in Egypt is daring and opens dialogue where before there was none. Yet in the book, Mr. Fathi intentionally uses an ellipsis for the word “faggot,” instead writing “fa …” (pp. 24, 26). The effect is to demonstrate the author’s rejection of the word’s use, as well as encourage the reader to rebuff the term. Instead, the work substitutes the Arabic word for “faggot” with the new Arabic equivalent for “homosexual” or “gay:” mithli.

To encourage tolerance and educate about the new term, Mr. Fathi places Assam, the main character and narrator, in a dream sequence where he holds a sign on which is written, “I am gay (mithli), I am a human being” (p. 46). Passersby ask what the term means and guess at its implication. “What does ‘gay’ (mithli) mean?” a flower seller asks a young boy. “It means, may God protect us, that he is a child molester, sir” (p. 46). Assam’s former colleague also walks by and asks what “gay (mithli)” means; the boy then shrugs his shoulders and exclaims, “I have no idea” (p.46). The entire story educates the Arabic reader about this new linguistic construction. Therefore, the story’s mixing of and playing with language reflects a young voice, a newly breached taboo, an artistic experiment, and a civil rights message. 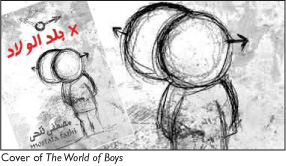 In addition, Mr. Fathi’s decision to use English terms, both transliterated and written in the original Arabic text, reflects the struggle for identity socially, linguistically, and sexually. Common English words such as “casual” and “parking” are transliterated into Arabic. The terms, however, are used to signal wealthier socio-economic style. The use of foreign words, particularly English, is a signifier of better education and, by extension, wealth. But the incorporation of foreign words into popular ‘Amiyya also reflects the trickle-down effect of ideas. Like services and goods, the cheaper the words become the more widespread their use. For example, the main characters, both from poor economic backgrounds, would not have used words such as “Internet” ten years ago; now, they appear transliterated in dialogue, and the characters widely use them. Also, a concept may lose its upper-class exclusivity and enter into the colloquial vocabulary if information becomes more available; the word may still designate upper-class style and privilege, however. Hence, there remains a form of socio-linguistic schizophrenia.

Assam discovers other neologisms in both innocent and brief, but socio-linguistically revealing, conversations about gay terminology that he has yet to learn. Concepts such as “top, bottom, both” (p. 25), and “bi” (p. 26) are examples of this identity struggle present in the text and transliterated into Arabic. Their use in Arabic suggests that the words are becoming more commonplace across Egypt’s metropolitan and young socio-economic strata. “Oral sex” and “gay,” however, are written in Roman letters. This suggests they are new introductions into the vernacular; the upper class is more exposed to their use, however taboo. This reflects developments in Egyptian colloquial itself. By using such terminology, Mr. Fathi indirectly invites a discussion to accept or reject a new dialect. Similarly, the use of such neologisms remains true to break from classical Arabic terminology that would otherwise seem foreign and awkward. Thus the taboo terms begin to shake off its offensive coil and move towards socio-linguistic acknowledgment.

The homosexual community itself faces a socio-linguistic dilemma: “are we sexually male or female?” For example, on page 25, Assam notes that Soona, the overtly effeminate call boy, uses grammatical suffixes for the female gender when talking about himself or his homosexual posse. The effect is a linguistic sex-change. English’s lack of gender lacks this nuance. Also, to a large extent the male homosexual community in Cairo adopts female personalities. This reflects a conundrum in this population of understanding their sexual identity in a society with a rigorous dichotomy of sexual orientation and gender classification. Equating homosexuality with “taking it like a woman” is mentioned as a popular insult (p. 26). Thus, Assam discovers that Soona’s nickname, as well as those of his compatriots, are female pseudonyms. Mohammad, Assam’s best friend, explains to Assam that, “all of the gays [sic] have a girl’s name as well. In Soona’s group there is a guy named ‘Mirna’ and another guy named ‘Angie’ and then there is this fat little pudger named ‘Leila’” (p. 36). The struggle for identity is further complicated.

The author also explores themes of religion and sexuality. However, he does not impose a specific religious or social injunction on the interpretation of his work. Nevertheless, he clearly seeks to mend the fissure between sexuality and religion. Assam and Mohammad are on a spiritual journey throughout the novella. Periodically, the question of redemption and damnation are posed. “Do you think we’ll get into heaven, or be condemned to hell?” asks Mohammad. Assam responds, “I don’t know Mohammad, but what I do know is that God is All Merciful and All Compassionate and that He forgives all sins, except for those who deny Him. And neither of us has ever denied Him.” Meta-themes dealing with religious political movements also converge on this trajectory. For example, Assam has a sexual encounter with the bearded and young Sheikh Osama, a religious bookseller. The beard in Egypt, among Muslims, has become a symbol not only of piety and religious zeal, but also an indicator that the individual is most likely active in a conservative Muslim political group. The beard itself is a practice of emulating the Prophet Muhammad and his companions, and thus indicative of Salafist-Islamist/Muslim Brotherhood sympathies, specifically. Mohammad also grows his beard and joins an Islamic political group after his father dies. For European readers who experienced student revolts in 1968 and Americans during the Vietnam War, the beard as a form of protest should not seem so foreign. Other meta-themes abound such as poverty, regional turmoil, Egyptian popular culture, and the struggle for identity under the deceptive dichotomy of “East vs. West” civilization.

Mr. Fathi is a young Egyptian human rights activist. He does not deign this work to be a masterpiece. Nor does he consider it complete. Critique can be lobbed at the story for not dealing with “queer” issues more critically, or for failing to incorporate a lesbian Egyptian narrative. His work must be read for what it is, however, given the restrictions and confines of conservative Egyptian society and access to this subculture — nothing more, nothing less. The opposing pressure between religious groups and the government also influenced the final publication of the book. Egypt’s State Security is the official censor for all published material in Egypt. Ironically, government censors allowed the book to be published. After some editing, the authorities stipulated that the original Arabic version be printed without pagination. This was done to avoid religious clerics and political polemicists from merely grabbing a provocative passage just by the page number, rather than reading the story itself. If there were page numbers, a greater storm of indignation could have easily surfaced and spread. Also, several bookstores have either refused to carry the story or, having caved under pressure, removed it from its shelves — “Diwan,” a beau monde bookstore is one such store — even though the book demonstrated unexpected success: In contrast, some bookstores shelves were quickly depleted.

In the literary tradition of Tolstoy’s Hadji Murád, Mr. Fathi tells the reader that the book is both fiction and real. Both are true. But the message remains palpable. Reading and translating Arabic literature is far more imperative than before, as ideologues brood more loudly about culture clashes and civilizational inadequacies. Just as Azar Nafisi notes in Hadji Murád, this story demonstrates a bond “based on a sense of individual integrity and a simple human dignity, destabilizing our usual definitions of imperialism, colonialism, or the clash of cultures.” Such is literature’s artistic activity.

Such is an Egyptian bedtime story.