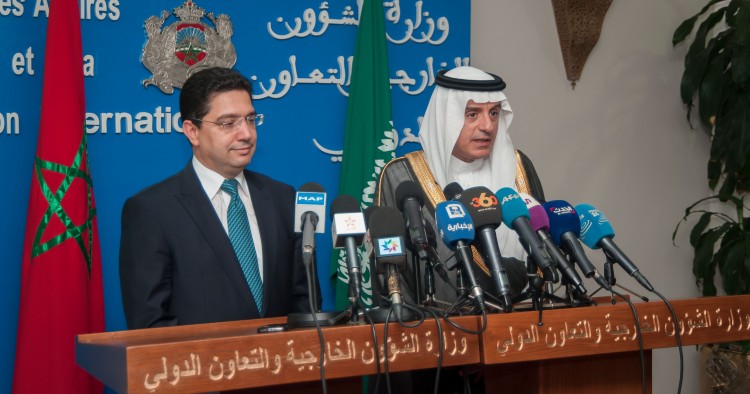 The alliance between Morocco and Saudi Arabia has historically been strong, bolstered by shared concerns about regional turmoil in the aftermath of the 2011 Arab Spring protests, but recent tensions have brought bilateral relations to an all-time low. Last month, frictions between Rabat and Riyadh came to the fore when Morocco recalled its ambassador from Saudi Arabia. Numerous issues played a part in the lead-up to this, including Morocco’s decision to formally leave the Saudi-led coalition in Yemen and a recent Al Arabiya report on the Western Sahara conflict. There is an ongoing and complex “transient crisis” between the two kingdoms, but it remains unclear if this will ultimately lead to a rupture or if their relationship is merely experiencing temporary turbulence.

At the heart of the issue is Morocco’s unease with the direction of Saudi foreign policy under King Salman and Crown Prince Mohammed bin Salman (MBS). With MBS at the helm, Riyadh has put more pressure on its fellow Sunni Arab states to align with Saudi interests while the kingdom pursues a maximalist agenda in the region. But this comes at a time when Morocco is increasingly determined to forge its own path. Having returned to the African Union in 2017 after a 33-year absence and now seeking to build up Casablanca as a financial center for the African continent, Rabat wants to conduct an independent foreign policy that leaves its options open.

Morocco’s foreign policy has long had two main foundational pillars: close ties with Western powers — especially the United States, France, and Spain — and positive relations with fellow Arab states, with the notable exception of Algeria. Riyadh and Rabat have maintained strong ties for decades, and at the time of the Arab Spring uprisings, Saudi Arabia even invited Morocco to join the Gulf Cooperation Council (GCC). Although it declined in the end, Morocco’s ties with nearly all GCC member states have deepened in recent years, most notably with Saudi Arabia, the United Arab Emirates (UAE), and Qatar.

While Rabat has aligned itself with Riyadh on issues such as Iran and Lebanese Hezbollah, its continued warm relations with Doha throughout the nearly 21-month-old GCC crisis have underscored the North African kingdom’s willingness to break with Saudi Arabia’s agenda. Morocco aims to maintain close relations with all GCC member states. Its leadership sees a functional GCC as serving the interests of all Arab states and has refused to join the so-called Anti-Terror Quartet (ATQ) — Bahrain, Egypt, Saudi Arabia, and the UAE — against Qatar.

Rabat views the prospect of severing ties with Doha as contrary to its national interests and instead prefers to remain officially neutral in the dispute. This choice has been interpreted by Saudi Arabia as siding with Qatar, however, in what it views as a zero-sum conflict. Morocco’s actions since the blockade, while not explicit, have contributed to this perspective as well. Rabat sent food aid to Doha shortly after the blockade began and the king of Morocco offered to mediate, albeit to no avail. In March 2018, Moroccan and Qatari officials met in Rabat and expressed their determination to forge stronger bilateral ties, particularly in trade, finance, investment, and culture, signing several agreements to that end. The Qatari leadership will remember Morocco’s stance during the Gulf dispute, and Rabat will likely benefit from greater Qatari investment in its large-scale infrastructure projects as a result. For Morocco, the GCC crisis also provided an opportunity to demonstrate its independence on the international stage as a sovereign power that does not succumb to Saudi pressure.

For Saudi Arabia, the growing relationship between Doha and Rabat has furthered the perception that Morocco is allied with Qatar. While the Saudi leadership was likely bothered by these moves, Rabat’s decision to remain officially neutral did not give rise to any public frictions between the two monarchies in the early stages of the GCC crisis.

Western Sahara has now become another source of tension between the two states as well. In February, the Saudi-owned broadcaster Al Arabiya aired a documentary about the conflict that Moroccan officials saw as crossing a red line. The documentary suggested that Morocco invaded Western Sahara after Spanish colonial rule ended in 1975, contradicting the official Moroccan narrative on the territory, which Rabat calls its “southern provinces.” Saudi Arabia has historically backed Morocco’s sovereign claims in contrast to some other Arab regimes, including Algeria, Libya, and Syria, which recognize the Sahrawi Arab Democratic Republic as a state under Moroccan occupation.

The broadcast of this documentary did not mark an official change in Riyadh’s stance, but it is noteworthy that it came shortly after Rabat’s chief diplomat, Nasser Bourita, voiced concerns about the humanitarian disaster in Yemen in an interview with Al Jazeera. Bourita said Morocco’s role in the Saudi-led coalition in Yemen changed as a result of “developments on the ground.” Some analysts have suggested that the documentary was aired in response to Bourita’s comments, especially given that he made them on a Qatari-owned network that is blocked in Saudi Arabia.

Morocco was originally a member of the Saudi-led coalition in Yemen, but it subsequently ended its military involvement. The rising civilian death toll and ongoing humanitarian disaster have fueled a growing outcry around the world, and continued participation in the coalition comes with high moral, reputational, and strategic costs. Morocco is concerned about its international image, especially given its close ties with France, Spain, and the US, and as conditions in Yemen have drastically worsened since 2015, Rabat reconsidered its stance.

In practical terms, Morocco’s withdrawal will not have a large impact on the ground since it has not played a major military role since 2015, but it does highlight a more serious problem for the Saudi campaign against the Houthis: The worsening situation in Yemen has led more Arab states to doubt MBS’s judgement and role as a regional leader. Morocco’s withdrawal from the coalition further demonstrates Rabat’s willingness to break with Riyadh on foreign policy, a development that doesn’t bode well for the Saudi-Moroccan relationship.

Other sources of tension

These are not the only issues fueling Saudi-Moroccan tensions, however. Last year, many Moroccans, from social media users up through top government officials, expressed outrage at Arab countries, including Saudi Arabia, that voted against Rabat’s bid to host the 2026 FIFA World Cup. Riyadh’s support for the North American bid over Morocco’s was widely perceived as an insult. Intriguingly, Qatar was among the few Arab countries that did support Morocco’s bid. King Mohammed VI responded by personally thanking the Qatari emir. Reportedly, Riyadh had pressured Bahrain, Kuwait, Jordan, and the UAE to vote against Morocco, while all Maghrebi countries, including Algeria, plus Palestine and Yemen voted in favor.

Furthermore, it was also notable that Morocco did not host the Saudi crown prince during his international tour in late 2018. The trip was largely aimed at showing that, despite the uproar over the death of Saudi journalist Jamal Khashoggi, the crown prince maintained support across the Arab world. MBS visited three other countries in the Maghreb (Algeria, Mauritania, and Tunisia), along with Bahrain, Egypt, and the UAE, but not Morocco. It is unclear who made the decision, but Moroccans expressed their support for the move, viewing it as a deliberate rebuke of MBS by King Mohammed VI. The Moroccan government remained quiet about the issue, saying only that scheduling problems and a lack of preparedness on Rabat’s part were to blame.

Also in December 2018, Morocco’s treasury released a report stating that of the four GCC countries that had each pledged a grant of $1.25 billion to Morocco in 2012, only Qatar and Kuwait had paid up in full; Saudi Arabia had paid just $868 million to date. As the Qatar crisis drags on with no end in sight, Morocco’s leadership has been prudent in deciding which GCC states to move closer to. Officials in Rabat have doubtless taken notice of Qatar’s ability and willingness to fulfill its promises. In turn, this has bought Doha much good will in Rabat, just as Riyadh’s failure to do so has contributed to the ongoing Moroccan-Saudi rift.

Both Morocco and Saudi Arabia seem to understand that these issues will not resolve themselves. Rabat believes Riyadh has disregarded its fundamental interests on Western Sahara, while the Saudi leadership perceives Morocco as taking a “pro-Qatar” stance on the GCC crisis. Both kingdoms’ leaders feel betrayed by the other and believe that diplomatic action is necessary to address these points of contention. To avoid further exacerbating tensions, the two states must address their conflicting interests in a way that leaves the door open to repair damaged ties.

How Morocco and Saudi Arabia’s leaders will deal with the friction affecting their relationship is unclear. It is premature to conclude that this will mean the end of their alliance, or even that the underlying causes are beyond repair. The two kingdoms are clearly capable of restoring warm relations through diplomatic outreach and greater consideration of the other’s core interests. There is a real risk, however, that a lack of dialogue will allow this dispute to escalate to the detriment of both countries’ long-term interests.

Giorgio Cafiero is the CEO and founder of Gulf State Analytics, a geopolitical risk consultancy based in Washington, D.C. The views he expresses are strictly his own.