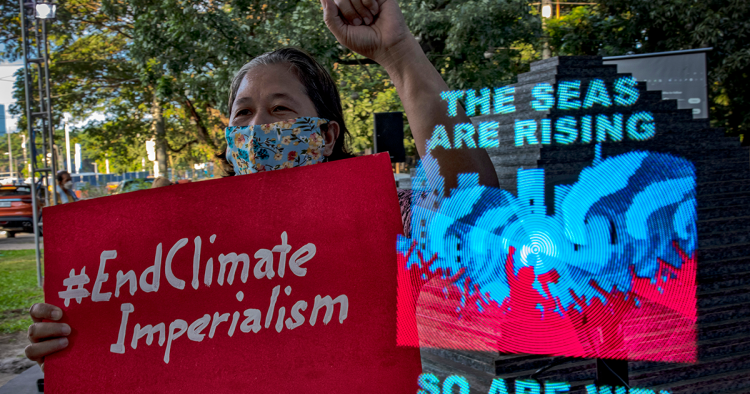 As the first of two consecutive global climate conferences to be held in the Middle East and North Africa region, the 27th Conference of the Parties (COP27) to the United Nations Framework Convention on Climate Change, set to take place in Sharm el-Sheikh, Egypt in November, could provide a renewed opportunity for international leaders to overcome the failures of COP26. The 2021 U.N. Climate Change Conference in Glasgow, Scotland was widely criticized by activists and civil rights groups, particularly from the Global South, for censoring the voices of vulnerable communities on the frontlines of the climate crisis. This censorship disproportionately affected voices from the Global South in a way that perpetuates climate injustice and the legacy of climate coloniality.

What is climate coloniality?

Farhana Sultana has elaborated on the term “climate coloniality” by pinpointing how hierarchical imbalances of power created during the colonial period are reflected in ongoing forms of neocolonialism fueled by global market systems.

The climate crisis is an extension of colonialism’s extractive model, which relied on racist exploitation of forced labor and extraction of natural resources from resource-rich countries in the Global South. Ongoing climate coloniality is maintained through neoliberal extractivism, imperial structures of global trade, and racial capitalism. The “slow violence” inflicted by fossil fuel companies on racialized communities has aggravated climate-related disasters and displacement for the most socially and economically vulnerable in both the Global North and South — those who, paradoxically, are the least responsible for the climate crisis.

Climate initiatives often serve as tools of greenwashing by reframing major players in big tech and fossil fuel industries as champions of sustainability working toward climate solutions, instead of holding them accountable for their role in creating the climate crisis. Rather than addressing the structural causes of global warming, political leaders have latched onto unproven and expensive technological solutions, including agricultural digitalization, genetically modified crops, CO2 capture, and carbon credits. In reality, these technologies benefit a few multinationals and big-tech investors while stripping historically impoverished local communities of their land and disrupting traditional ways of life, thereby entrenching deep-seated injustices and extending the legacy of coloniality.

The problems with these neocolonial technological “solutions” to climate change have become clearer over time. For example, it is increasingly argued that the carbon released by converting arable land and forests to monocultures for agrofuel production outweighs the net greenhouse gas (GHG) savings. While converting arable land from producing food to fuel serves the interests of governments seeking to meet their GHG reduction targets, it comes at the expense of smallholder farmers and indigenous communities, who suffer from land dispossession, mass displacement, food insecurity, and deteriorating working conditions. As such, biofuel production glosses over abuses and violation of human rights by governments and/or development corporations.

Similar problems have affected the Reducing Emissions from Deforestation and Forest Degradation (REDD+) scheme, introduced in 2010 by the U.N., which aims to ensure the sustainable management of forests and combat carbon emissions from deforestation. The program’s centerpiece is a carbon trading mechanism that creates financial value for carbon stored in forests, and both governments and private corporations are able to contribute to associated mitigation activities. In essence, REDD+ commodifies and sells forests as carbon offsets for polluters from the Global North, enabling them to launder their carbon pollution in the Global South in a way that exacerbates pre-existing social exclusion and reinforces neocolonial structures of power.

This is particularly true given the fact that most REDD+ projects are based in low-income countries that are most vulnerable to climate change in the Global South where forest conservation is being commoditized. This allows industrialized countries and international corporations to meet part of their emissions reduction targets through REDD+ credits even as they continue to burn fossil fuels and release carbon elsewhere. As such REDD+ projects reframe forests as mere trees that can be traded without regard to their broader value on cultural, spiritual, and livelihood grounds. Meanwhile, local communities are viewed as hindrances to “nature conservation” and threats to the forest.

REDD+ advocates thus place the blame for deforestation on local farmers and traditional land use practices such as “slash-and-burn” agriculture, even though they are unable to halt the real drivers of deforestation and in fact hasten them by expanding industrial palm-oil plantations and infrastructure projects. More broadly, the climate crisis is viewed not as a historical problem rooted in the fossil-fuel-based capitalist development system but rather as a market problem to be addressed by the same economic mechanisms that created it in the first place.

Decolonization is thus a key part of tackling the climate crisis. By decolonizing the discourse around climate, a different story can be told, one that breaks from the hegemonic Western narrative portraying the Global North as “saving” the Global South from climate change. This entails raising awareness about new forms of colonialism, such as carbon offset initiatives, that continue the plunder and exploitation of natural resources and cheap labor in the Global South.

In addition to recognizing the capitalist control of the climate discourse, as well as its financing and solutions, there is a pressing need to decolonize the discourse by pluralizing knowledge production. This includes re-evaluating the dominant Eurocentric understanding of the climate crisis and acknowledging “othered epistemologies” that emphasize indigenous or traditional knowledge and are produced by those suffering from severe climate harms. Above and beyond acknowledging that there are many ways of understanding the climate crisis, it is equally important to decolonize it at the material and praxis level as well.

More broadly, we need to consider a radical transformation of how our economy is organized and functions. Under hegemonic neoliberal rationality, the climate crisis has been reduced to an economic issue that can be solved solely by market mechanisms. With its focus on pursuing privatization, deregulation, and tax and government subsidy cuts, neoliberalism liberated corporations to keep looking for fossil fuels and accumulating profits. Any attempt to hold polluters accountable is met by greenwashing, hollowing out democracies and entrenching the power of elites at the expense of environmental rights and people’s health.

Challenging the dominant epistemologies and the “lived experiences” of climate coloniality requires amplifying the voices of front-line and disadvantaged communities and those that are the most affected by the climate crisis in climate planning and policy making. For these communities to be heard, they need to stand together, build solidarities with other resistance groups that share similar aspirations, and create the leadership capacities and organizational resources needed to navigate uncertain political contexts and transform climate action into meaningful policy changes.

Shaking off the colonial legacy thus requires a political transition as much as a paradigm shift. Only once this happens can we start thinking about just and feasible solutions to the climate crisis and finally put the false, flawed, and self-defeating ones that have been adding to the growing list of what Gills and Morgan call “successful failures” behind us.

Zeina Moneer holds a PhD in environmental politics from Freiburg University in Germany and her research interests include environmental movements, environmental justice, environmental communication, international polices of climate change negotiations and adaption, and sustainability transition with a particular focus on the MENA region. The views expressed in this piece are her own.