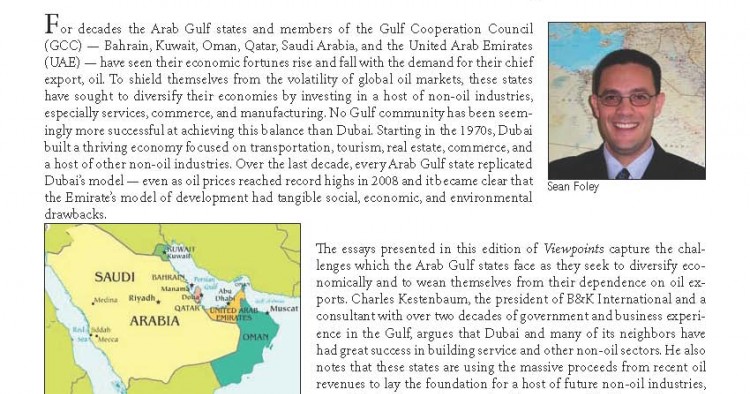 The six Arab monarchies of the Gulf are wealthy societies which have made remarkable social and economic progress over the last three decades. One only has to look at the pictures of Abu Dhabi, Dubai, and other Gulf communities from the early 1970s to see how far they have come during this period — from isolated desert towns without running water and electricity to bustling cities central to the global economy. In a few decades, these six states achieved a level of social and economic development that it took other states many decades — if not centuries — to reach.

While there is little question that the proceeds from oil sales have been (and will be) central to the development of the Gulf states, they also have built several globally competitive service and manufacturing industries. Even during the increase in oil profits from 1998 to 2008, the Gulf states continued to invest heavily in manufacturing, services, and renewable energy sources, such as solar and wind power.

No state in the Gulf has better taken advantage of these various factors than Dubai. By building on Singapore’s example of free trade and openness to foreign investment, the Emirate has successfully promoted itself as a regional service center for global corporations and as a social “escape valve” for the peoples of Saudi Arabia, Iran, and other large, neighboring conservative societies. The city boasts a strong hospitality industry, and alcohol and other vices are available to visitors. Dubai also has taken advantage of capital flight from the former Soviet Union and from nearby civil wars and conflict zones. The Jebel Ali Free Zone has been an impressive engine of growth, drawing industries from North America. A good example is irrigation equipment that formerly had been produced in Nebraska and Texas, but is now produced in Jebel Ali.

Although Dubai’s recent economic problems are serious, one should keep a proper perspective of them. Yes, the Emirate experienced a real estate bubble in recent years, and a number of people are suffering because of it. But the economic system is still viable in the long term, and one has to remember how far it and the rest of the UAE have come in recent decades. As recently as 1970, there were no high schools in Abu Dhabi; today, it is a modern city where Western universities hope to establish new campuses. As a friend recently told me, when you fall off a ladder, the severity of your injuries depends on which rung you were on. Dubai and the UAE generally appear to have fallen hard because of how much they have achieved in recent years.

The future viability of Dubai’s economic model is borne out by the success that other states in the Gulf have had in implementing its economic model. Saudi Arabia Basic Industry Corporation (SABIC) has been a global leader in the production of petrochemicals and plastics for more than two decades. Aluminum Bahrain (ALBA) operates the largest aluminum smelter in the world. Qatar’s gas industry is among the most profitable in the world, and its Education City houses satellite campuses of several leading American research universities. Indeed, Qatar has replaced Jordan as the state with the most progressive social climate in the region and the best place to earn a Western-style university degree.

Nor are these industries the only vehicle with which the Arab Gulf states can prosper in the 21st century. While a number of sovereign wealth funds in the Gulf may have lost as much as a third of their value in the past year, they are still immensely rich. Abu Dhabi’s investment authority alone has approximately $500 million. These resources have allowed Gulf states to invest in promising new companies around the globe. If only two out of every ten of these new companies prove to be viable, the Arab Gulf states will be well positioned to have valuable equity in the future British Petroleum or Shell of renewable energy or the future Google of information technology.

Nonetheless, a model of development in the Gulf that emphasizes services and manufacturing is hardly problem free. While the UAE’s domestic population is sufficiently small that it will have to depend on expatriate laborers for years to come, other Gulf states face serious labor issues. In Saudi Arabia, for instance, there are thousands of unemployed young workers who lack the skills to work in a modern economy. They cannot compete with the thousands of skilled expatriate workers in the Kingdom. Reconciling the interests of business leaders, who prefer cheaper foreign labor, and the need to employ Saudi nationals remains a serious issue for the Saudi government.

Developing more rational labor markets has not been aided by weak regional institutions and an inefficient system of governance that often substitutes announcements of plans for concrete actions. At times, one wonders whether the GCC should be renamed the Gulf Competition Council, given how many years it has taken the Gulf states to implement plans for even the most basic measures needed for regional economic and political integration. Slow and disorganized official planning has sometimes hampered major projects, such as George Mason University’s campus in the UAE Emirate of Ras al-Khaymah.

Even if the Gulf states could address issues of labor and regional integration, they would still have to deal with the byproduct of rapid development, pollution. Desalination plants, which provide the electricity and the water essential to life in the Gulf, can be especially harmful. The chemical process that they use to clean seawater not only pollutes the air, but also discharges harmful chemicals and other pollutants into the Gulf’s ecosystems. Over time, this process has changed the salinities of the water in the Gulf and has made it dangerous to swim near some of the region’s most exclusive developments.

Despite these changes, the Gulf states are wealthy nations that have come an enormous distance in a few short decades. Regional cooperation in areas such as patents, trademarks, and tariffs will spur innovation and growth in non-oil industries. One sees integration in other economic areas and even in the political arena. A good example is Qatar’s linkage of its electrical grid to Saudi Arabia — despite the fact that diplomatic relations between the two countries have been poor for many years because of Qatar’s support of the controversial Arabic satellite channel Al Jazeera. While it may take longer than initially thought to implement a common currency and, there is every reason to believe that a common currency and other initiatives will eventually happen. Indeed, the economic future of the six Gulf states — both their oil and non-oil industries — remains bright.