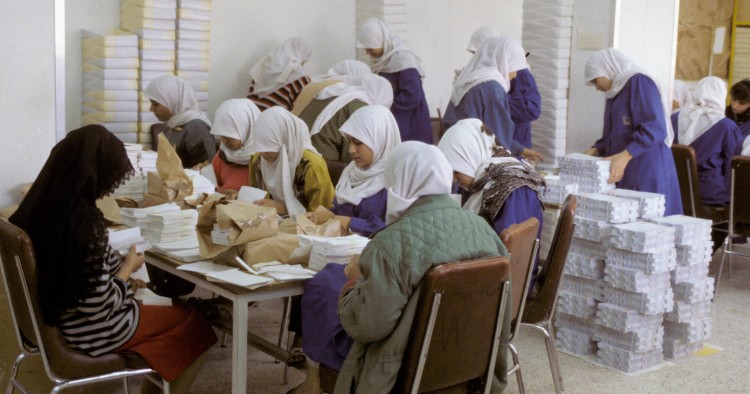 The six states of the Gulf Cooperation Council (GCC)[1] have over five million migrant workers — one of the highest concentrations of migrant workers in the world. According to the World Migration Report (2003), 25% of the workers in Saudi Arabia, 65% in Kuwait, 67% in the UAE, and as much as 70% in Qatar are immigrants or non-nationals. Most of these immigrants are from South Asian countries such as India, Bangladesh, Pakistan, and Sri Lanka. The discovery of oil in the early 20th century opened new avenues for international movement. The 1973 spike in oil prices enabled Gulf countries to rapidly expand their economies and thereby attract Asian workers.

During the past 20 years, the flow of Asian workers to the Middle East has increased markedly. The proportion of non-nationals (often referred to as expatriates) to the total population has prompted concerns in receiving countries about the negative impact of dependency on a foreign labor force. Countries such as Saudi Arabia, Oman, UAE, and Qatar have instituted new “localization” policies, where a significant proportion of jobs are reserved for local people (i.e., for nationals only).[2] This essay focuses on the localization policy adopted by the Sultanate of Oman, popularly known as the Omanization program. [3]

Following Sultan Qaboos’ accession to power in 1970, Oman embarked on a program of economic liberalization and modernization. The discovery of oil, which opened new vistas for job opportunities, attracted thousands of migrants to Oman. Between 1970 and 2000, the percentage of foreigners in Oman steadily grew. Population figures since 1980 show a constant increase in the proportion of the non-Omani population. At the end of 2002, the number of expatriates in Oman was 668,000, out of a total population of 2.5 million.[4] The dominance of foreigners is more pronounced in the work force than it is in the total population.

From 13.77% of the population in 1980, the expatriate population increased to 26.75% in 1993. There was a rapid increase in expatriate labor force between 1991 and 1996. The Iran-Iraq War (1980-88) and the 1991 Iraq War helped to attract migrants to this country. At the time of the first census (1993), non-Omanis constituted 61.4% of the total labor force while Omanis constituted only 38.6%. There were three non-Omanis for every two Omanis engaged in the labor force. Since 1997, the percentage of non-Omanis has slowly declined. The most recent (second) Census of 2003 reports this share to be 23%. Yet, expatriates still constituted more than 75% of the total work force.

Oman is a labor importing country, drawing most of its foreign work force from Asian countries such as India, Bangladesh, Pakistan, and Sri Lanka. At the same time, however, Oman is a “young” society; an estimated 41.2% of its population is under the age of 15, and 53.9% is in the 15-to 60-year-old bracket. Statistics show that every year almost 30,000 students successfully complete their secondary schooling and are ready to enter the job market. The tussle in the job market starts at this juncture, as most young Omanis entering the job market find it difficult to get a job. The reason for this is the lack of vocational/higher education and/or the lack of practical work experience compared to expatriate laborers working in similar positions. This type of unemployment among local youths poses a major problem for Omani citizens and their government. Oman’s development policy includes an “Omanization” drive aimed at increasing the percentage of Omani citizens in the labor market.

The Omanization plan, implemented in 1988, strives to reduce the country’s dependence on expatriate manpower by substituting Omani nationals for foreign labor.

1) Positions currently held by expatriate workers could be easily occupied by Omani nationals.

3) The substitution of expatriate workers by Omanis also would help to reduce Oman’s balance of payments deficit because workers’ remittances, which amounted to $1.7 billion in 1996, would be lower.

4) The substitution of expatriates by Omanis could well lead to an increase in domestic spending through the multiplier effect, and thus contribute to faster GDP growth. With this rationale, concrete steps were planned and implemented during the fourth (1991-95), fifth (1996-2000), and sixth (2001-2006) Five-Year Plans.

Under the Omanization drive, the following occupations were reserved for the citizens of Oman only.

• The Ministry of National Economy ascertains demand for labor by occupation and guides job seekers into specific vocational training tracks. Firms that request new permits for expatriate workers are required by the Ministry to prepare an Omanization plan that lays out how they intend to achieve the relevant industry targets.

• Influx Controls on Expatriate Workers: This policy consists of using an overall ceiling on the influx of expatriate workers and allocating work permits to employers in such a way so as to meet the overall ceiling.

• In 1994, Oman also started to impose fees on the hiring of foreign workers. These fees are paid by the employer and set aside for human resources development often referred to as “training contributions.”

• Thousands of illegal workers were deported, many on the grounds of amnesty to create space for citizens.

• Priority in the awarding of government contracts to private companies with Omanization target fulfillment.

• Entrepreneurial development program for Omani youths: the SANAD program. This program was established to develop entrepreneurs and placed under the supervision of the Ministry of Manpower. Under craftsman and vocational categories, small loans are granted after fulfilling necessary requirements. Some of the major occupations included under this program are grocery (foodstuff) shops, vegetable and fruit shops, the sale and supply of electrical items, delivery vehicles, sale of fish, butchery shops, car washes, etc.

During the fifth Five-Year Plan, the Omani labor force increased by about 5.1% compared to 2.3% for the expatriate labor force. The Omanization rate increased in the private sector from 14.7% in 1995 to 16.6% in 2000.The Omanization data in the private sector indicates that the sectors least affected by the plan are agriculture and fishing; wholesale and retail trade; restaurants and hotels; manufacturing; the construction of roads and buildings; and community and personal service. In these sectors, 88% of the total private sector employees are employed and 95% of total expatriate workers are engaged.

The highest Omanization rate has occurred in the following sectors: transport, storage and communication; finance insurance, real estate and labor services; mines and quarries; and electricity, water, and gas. But these sectors employ only 8% of total private sector employees.

The Omanization program has influenced the various aspects of the economy in some way or another. These effects can be classified under two categories namely impact on economy and impact on migration. Unemployment in Oman is mostly confined to first-time job seekers. The age at entry in the job market is between 15 to 20 years. At this young age, most Omanis find it difficult to get a job as they do not have professional or vocational training. There is a very low level of conformity between labor market needs and educational system output. Employers often refrain from employing Omanis due to their inadequate technical and vocational expertise. Sometimes preference is given to expatriates due to lower wages and allowances and their readiness to work under any situation.

Demand for expatriate labor in the coming years will be affected by the growth of the economy, the creation of new jobs, and the force with which the Omanization plan will be implemented. Though the percentage of expatriates is declining, the actual number is rising. In 1996, there were 27.64% (612,000) migrants compared to 25.98% (624,000) in the year 2000. Statistics show a decline in the proportion of the expatriate labor population. The occupations that are currently under a strong Omanization drive are replacing migrants with Omanis. In such cases, return migration to native countries or migration to some other Gulf country is the only available option.

The present Omanization program targets neither highly skilled occupations nor unskilled and hazardous occupations. For both categories, the country will have to depend on expatriates for a few more years (i.e., until locals are sufficiently skilled to work in these occupations). Educational enhancement and changes in mindset are two essential factors in determining the scope of Omanization in these occupations. A change in mindset will help Omanis enter and sustain private sector employment without limiting themselves to white collar government jobs. It is possible that for the next few years the government may not force an Omanization drive of certain unskilled and hazardous occupations, such as quarry work, domestic work, and cleaning jobs — for which expatriates will be welcomed.

The Omanization campaign may cause a state of confusion and insecurity among the expatriate labor force. The Government of Oman will have to devise a strategy by which an atmosphere of mutual trust and interest will be maintained because expanding economic activities aim at providing gainful employment to locals as well as to expatriates. In the future, the demand for foreign workers, and particularly for Asians will depend on several factors, such as the number of young nationals entering the labor market and the effect of the localization of labor markets (mainly due to government regulation); the capacity of Oman’s economy to generate new jobs; the development of locals based on vocational training and skills-based courses; and the reduction of the gap between the needed and available skills of locals.

The economics of Gulf prosperity are the result of development through economic liberalization. Labor receiving countries, such as Oman, rely on immigrants for the functioning of their economy, while labor sending countries such as India, Pakistan, Bangladesh, and Sri Lanka count on remittances as an essential source of foreign exchange. Current localization policies in Gulf countries in general, and Oman in particular, play a key role in deciding future migration trends by reducing unemployment among locals through limiting the inflow of foreign workers. However, such localization policies carry risks. Looking to the future, Oman could face a labor crisis due to its rapidly expanding economic activity. The demand for labor may be much higher than the domestic supply. Therefore, it remains to be seen how successful the policy of Omanization will be in sustaining the domestic economy by replacing the immigrants with local labor.

Metwally, M.M, “Attitudes of Unemployed GCC Citizens towards Employment in the Private Sector: A Case Study,” Indian Journal of Social Development, Vol. 3 No.1 (2003).

[2]. The term “localization” has a specific socioeconomic connotation; it is used to indicate nationals and issues related to nationals. Gulf nations view localization as the desired alternative to perpetual dependency on expatriate workers.

[3]. Omanization is a program instituted by the Government of Oman in 1988 that aims to provide various opportunities to increase participation of Omani labor in Oman’s economy and to reduce dependence on expatriate labor. The present study is primarily based upon the analysis of secondary data made available by Government of Oman. Statistical Year Books since 1984 published by Ministry of National Economy provide substantial information related to employment (Omani and non-Omani), sectoral distribution of economic activities and various demographic indicators. Various policy documents like Five Year Plans (fourth, fifth, sixth), the Census of Oman and facts and indicators of Five Year Plans provided important information to gauge the impact of Omanization on employment.