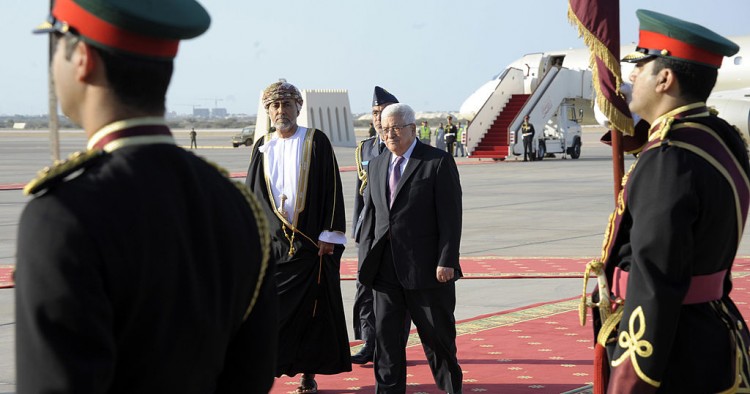 Representatives from most — but not all — Gulf Cooperation Council (GCC) member states, Egypt, Jordan, senior members of the Trump administration, and a handful of American, Palestinian, and Israeli businessmen attended the “Peace to Prosperity” economic workshop in Manama, Bahrain in late June. On the second day of the conference, the Sultanate of Oman announced plans to open an embassy in the Israeli-occupied West Bank “in continuation of the Sultanate’s support for the Palestinian people.” The Palestine Liberation Organization (PLO), which saw the workshop as a U.S.-backed effort to “liquidate” the Palestinian struggle and thus boycotted it, quickly welcomed Muscat’s announcement. Oman is characteristically attempting to play its unique hand of diplomatic cards in an effort to reverse the recent escalation of tensions between Palestinians and Israelis, while also demonstrating its independence and commitment to advancing dialogue and compromise between regional actors.

This news came eight months after Israeli Prime Minister Benjamin Netanyahu paid a visit to the Omani capital for surprise talks with Sultan Qaboos in October 2018, and four months after Minister Responsible for Foreign Affairs Yusuf bin Alawi bin Abdullah met with Netanyahu in Poland during the Trump administration’s “Peace and Security in the Middle East” summit. After the Warsaw meeting, Netanyahu said, “The courageous decision of Sultan Qaboos to invite me to Oman is changing the world. It’s pointing the way for many others to do what you said — not to be stuck in the past but to seize the future.”

Both engagements signaled Oman’s readiness to join most other Arab Gulf monarchies in moving toward a form of normalized relations with Israel. Nonetheless, by becoming the first GCC member state to open an embassy in the Occupied Palestinian Territory (OPT), Oman has also signaled that its determination to establish warmer ties with Israel will not come at the expense of its support for an independent, sovereign Palestinian state, in line with both the Arab and international consensus on the issue. For decades, the conduct of Omani regional and foreign policy has been a careful exercise in the pragmatic balancing of political relationships, and such an approach is even more important given the volatility and uncertainty in regional politics today.

Indeed, while speaking in Manama in October, bin Alawi declared that there would be no normalization of Omani-Israeli relations until the Palestinians have a sovereign state. As he put it, “Israel is a state present in the region, and we all understand this. … The world is also aware of this fact. Maybe it is time for Israel to be treated the same [as other states] and also bear the same obligations.” Bin Alawi also stated, “We are not saying that the road is now easy and paved with flowers, but our priority is to put an end to the conflict and move to a new world.”

It is difficult to read Oman’s embassy announcement and its timing as not being connected to the Bahrain workshop. The so-called “Deal of the Century” that senior White House adviser Jared Kushner and Middle East envoy Jason Greenblatt have yet to formally unveil has little potential to advance Palestinians and Israelis toward any lasting and just political settlement. Thus, Oman is seeking to serve as a de-escalator of tensions between the Israeli government and Palestinians, in keeping with Muscat’s traditional role as a diplomatic bridge and facilitator of dialogue in the Middle East. Especially as other GCC states are increasingly perceived as having “sold out” the Palestinians (a perception that is not new), having a “neutral” party like Oman provide a channel for diplomacy between the Israelis and Palestinians could potentially help cool regional tensions.

A major concern is that the Trump administration will announce U.S. recognition of Israeli sovereignty over the West Bank in its entirety, particularly as America’s presidential race heats up, which might trigger greater violence, not only in the OPT, but also elsewhere in the region. The “sabotage” against the Bahraini embassy in Iraq one day after the Bahrain workshop highlighted the extent to which perceptions that the GCC is betraying Palestinians or succumbing to U.S. pressure can make governments targets for a violent backlash from their own population. As the Trump administration broke from its predecessors by rejecting the two-state solution as the basis for resolution of the Israeli-Palestinian conflict, Washington’s Arab partners need to balance public opinion in their countries with their interests in currying favor with the White House.

By announcing plans to open an embassy in the OPT, Oman is demonstrating its continued belief that a Palestinian state is necessary for solving the Palestinian-Israeli conflict. This is at odds with Kushner’s plan, which would essentially — if reports are accurate — consolidate the Israeli occupation. With Oman announcing plans for an embassy in the West Bank, it is possible that some other GCC members, most likely Kuwait, Bahrain, or the UAE, will follow Muscat’s lead and take a similar step.

At the same time, by accepting Netanyahu as a guest before any other GCC state, Oman has been ahead of the curve among Arab Gulf states in moving toward establishing a political relationship with Israel.  This high-level re-engagement is nothing new for Omani foreign policy: Oman hosted the first visits by any Israeli leader to a GCC state when prime ministers Yitzhak Rabin and Shimon Peres visited the country in December 1994 and April 1996, respectively. Rather, it is rooted in Oman’s longstanding desire to facilitate dialogue in order to address — and hopefully resolve — political flashpoints in the sultanate’s volatile immediate and broader neighborhood.

Kristian Coates Ulrichsen is Fellow for the Middle East at Rice University's Baker Institute. The views expressed in this article are his own.

Giorgio Cafiero is the CEO and founder of Gulf State Analytics, a geopolitical risk consultancy based in Washington, DC. The views expressed in this article are his own.