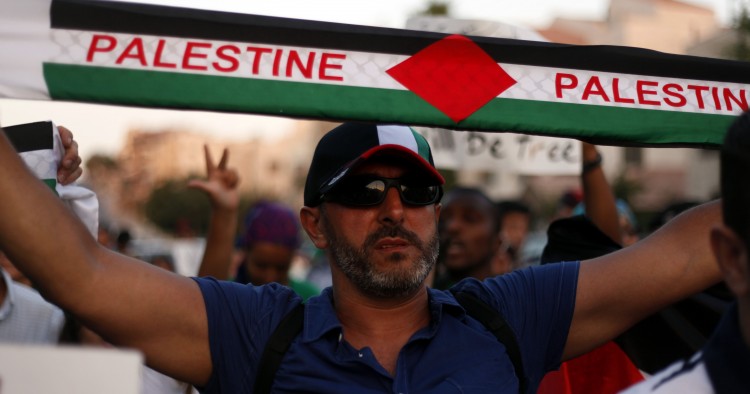 President Donald Trump’s refusal to endorse the two-state solution to resolve the Israeli-Palestinian conflict has irked one close ally—Jordan.  During King Abdullah’s visit to Washington in early February, Trump and other officials restated continued U.S. military and economic support for the kingdom. The king had outlined the dangers of moving the U.S. embassy to Jerusalem and underlined the need for peace between Israel and the Palestinians.

During his press conference with Israeli Prime Minister Benjamin Netanyahu on February 15, Trump was indifferent to the two-state solution, even mentioning the possibility of a one-state option. His reaction was taken by observers as upending a fixture of bipartisan U.S. policy on peace between Israel and the Palestinians.

On his side, Netanyahu refused to commit to what he described as “labels.” But he outlined Israel’s prerequisites, which include full security control over the Jordan Valley and Palestinian recognition of Israel as a Jewish state. There was no mention of East Jerusalem, right of return, and halting settlement building in the West Bank.

Trump’s departure from the two-state solution was seen as a triumph for Netanyahu and his right-wing coalition partners, some of whom have called for annexing major chunks of the West Bank. For Palestinians, it was yet another setback in their struggle to achieve self-determination and statehood.

But for Jordan, the U.S. shift is especially worrying as it gives ultra-nationalist Israeli politicians fresh ammunition to point to Jordan as an alternative Palestinian state; or what has been called the “Jordan Option.” That suggestion had gained traction in the 1980s, but the proposal that the West Bank could be divided between Jordan and Israel, or that Jordan could take responsibility for the Palestinian population in the West Bank, goes as far back as the Allon Plan of 1967. The “Jordan is Palestine” idea suggests that a Palestinian state already exists on the East Bank of the Jordan River, where at least 50 percent of the population is of Palestinian origin.

More recently, Israel’s Education Minister, Naftali Bennett, and head of the far-right Jewish Home party, has been referring to the existence of two Palestinian states; one in Gaza and the other in Jordan. Other hardline Israelis have suggested various options that fall short of full statehood for the Palestinians, but include land swaps with majority Arab populations between Israel and the West Bank in addition to the annexation of major parts of the Jordan Valley.

Unlike any other Arab country, Jordan has a special connection to the Palestinian issue. The West Bank was part of the Hashemite kingdom when it was occupied by Israel in 1967. And since the first Arab-Israeli war in 1948, Jordan has been on the receiving end of successive waves of Palestinian refugees from Israel proper, the West Bank, and Gaza Strip. Today, it is host to the biggest concentration of Palestinian refugees in the world—at least two million are registered with the U.N.

For Jordan, which has relinquished claims to the West Bank, the issue of Palestinian statehood in the West Bank and Gaza is directly linked to its national security and political stability. Other than its relevance to the right of return and addressing the fate of Palestinian refugees in Jordan, it is vital to debunking claims by the Israeli Right that Jordan is a de facto Palestinian state—a suggestion that is anathema to East Bank Jordanians and arouses deep-seated anxieties mixed with nationalistic hubris and manifestations.

In addition, the prospect of the creation of a Palestinian state between Israel and Jordan has been used as a pretext by various Amman governments to withdraw citizenship rights from Jordanians of Palestinian origin with residency permits in the West Bank. Moreover, it stymied efforts by some Jordanian-Palestinian figures in the kingdom to address the sensitive issue of granting equal political rights (what is referred to as incomplete rights) to all citizens, regardless of where they come from.

The issue of settlement of Palestinian refugees in their host countries is particularly controversial as the official Jordanian position insists on the right of return for refugees under a two-state solution.

Furthermore, the Hashemites consider their relationship to East Jerusalem and its holy sites a sacred one. Under its peace treaty with Israel in 1994, Jordan’s right in overseeing the administration and protection of the Al-Aqsa Mosque and other holy sites in the city is recognized. The demise of the two-state solution could undermine such rights in the future as Jewish extremists continue to call for the destruction of the site known as the Noble Sanctuary (Temple Mount for Jews).

During the 1980s and in early years of the 1990s, King Hussein and Yasser Arafat discussed the possibility of a confederation between Jordan and the future Palestinian state. Enthusiasm for such a proposal may not appeal to East Bank Jordanians today, although a growing number of Palestinians in the West Bank (46 percent according to a poll conducted last year) support a confederation with Jordan.

Trump’s equivocal statements on the two-state solution have prompted King Abdullah to seek regional and international reaffirmation for the option as the only viable path forward. Last week, he flew to Cairo to meet with Egypt’s Abdel Fattah el-Sisi and the two leaders underlined their support for the two-state plan as “‘the only solution to end the conflict.’” The king will host the annual Arab League summit in Amman at the end of March and he is expected to lobby for a strong message from Arab leaders reaffirming support for a negotiated settlement based on the two-state option. Arab leaders will also lend their support to the 2002 Arab Peace Initiative, which promises full peace between Israel and the Arab and Muslim worlds in exchange for full Palestinian statehood in the West Bank and Gaza.

The one-state option for Jordan is a non-starter. Although some Palestinian political figures now support a single democratic state in historic Palestine with equal rights to all citizens, neither Israel’s influential right will accept it nor will most Israelis since it will terminate the Zionist project of a Jewish state in Palestine. A bi-national state has been proposed by some Israeli politicians, but that too will face opposition from ultra-nationalists, as well as Islamist Palestinian factions. Netanyahu’s suggestion of a mini-state or state-minus, entailing limited autonomy and economic prosperity in Palestinian enclaves, goes against the Palestinian national aspiration of full statehood. While Netanyahu has rejected a regional peace deal in a secret meeting with Abdullah and Sisi, Trump talked about a regional effort for peace during the recent White House meeting.

Trump has yet to unveil a detailed vision for peace between Israel and the Palestinians, if any. There is a feeling in Amman that although the U.S. president talked about concluding a “bigger and better deal,” in reality neither he nor Netanyahu can come up with a better alternative to the two-state solution. Nevertheless, while the two-state solution may have been an ideal one, many analysts have conceded that it is dead and buried. Meanwhile, Jordan can do nothing other than pretend that it is still alive: the alternatives represent an existential nightmare for the kingdom.