“Our greatest value is our experience”: An interview with Ukrainian Deputy Foreign Minister Vasyl Bodnar 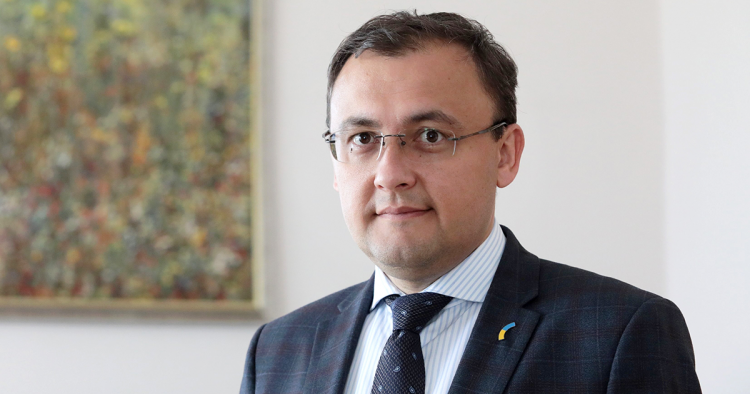 According to Deputy Foreign Minister Vasyl Bodnar, Ukraine has completed the necessary reforms for NATO membership and does not rule out integration without the territories illegally annexed by the Russian Federation. Bodnar also explains why Ukraine's Euro-Atlantic integration process is so difficult in comparison to that of the Baltic countries, which have had accelerated Western integration. This interview has been edited for length and clarity.

What are Ukraine's expectations from the Biden administration, following the latest U.S. and German decisions in favor of the Nord Stream 2 pipeline?

Bodnar: We are strongly against this project because of not only the energy dimension, but also the security dimension. By supplying gas from Ukraine to Europe, we have more safeguards against Russian aggression. That is the security dimension of the story. And despite the agreement between Germany and the United States, we, together with Poles and other countries, stand strong against this project. It strengthens the interdependence of Europe and Germany with Russia and also undermines our energy security and creates additional tools of influence in Europe.

Actually, we have been consulting with the Americans and we had representatives of the United States who came to Ukraine and shared their views on how they continue to do this. What is important for us is the preparation for the visit of our president to the White House. We pay particular attention to cooperation with the United States in different areas; it's not only the contradiction of this misunderstanding, but also the spheres of operation which we have with the United States, starting from the security issues and political dimension. We have a number of things to discuss. They have their interests of how we will proceed and we have our interests. We will we continue to have a strategic partnership with the United States.

There are some American experts who support integration of Ukraine into NATO without the territories occupied by the Russian Federation and that these illegitimately annexed areas be peacefully resolved with the Russian Federation. This could only be done by amending NATO legislation. What are your thoughts on this scenario?

Bodnar: [It is] absolutely real. I agree with this scenario. We do not have problems with the neighbors, it is Russian aggression and its occupation of the territories. It is something different than the elements of NATO.

We would be happy with the decision that was adopted in Bucharest in 2008. But we are where we are. We understand that the decision about NATO membership is a political decision and we are working with NATO and NATO member states separately to understand their feelings and to try to get their support. Most members of NATO are supporting NATO membership for Ukraine, but they still have many small or big reservations related to internal politics or to Russia that do not allow for it.

On the other side of the story, we understand that without strong practical progress, without internal reforms, it would not be possible to become a NATO member. And that is our task. So we are changing inside the country: democratic reforms, civilian control over military forces, everything needs to be prepared for any [Membership Action Plan]. It is being done by Ukraine with good speed. I would not say it is fully successfully — any country has internal problems — but we are moving on this way. We also received [Enhanced Opportunities Partner status], which give us the possibility to strengthen practical cooperation, to organize exercises, and to train our people.

We have a strong rocket industry and a strong military industry. We produce everything by ourselves, mostly weapons, and we defend ourselves. This could be valuable for NATO. But our greatest value is our experience, because every day we are at war, unlike any other country to such an extent. It is a fight with one of the biggest armies in the world, one with nuclear weapons, with strong financing for propaganda, subversive operations, cybersecurity attacks, etc. All this experience is very valuable and in practical terms, it could strengthen the resilience of the whole alliance and help partners to understand the real threats and how to deal with them.

One of NATO’s concerns is that Russian Federal Security Service (FSB) agents will infiltrate the Ukrainian army. How real of a threat is that?

Bodnar: That occurred in 2014. But the war changed this reality and the majority of people are anti-Russian nowadays. Our resistance would no longer work if we allowed it now.

If someone is discovered to have FSB connections, he is caught and imprisoned. Russia's lack of interest in exchanging prisoners is proof that we are no longer being infiltrated by FSB agents. It used to be interesting because there were Ukrainian citizens among them who had been recruited by the Russians. The Russian Federation is currently uninterested in prisoner exchanges.

Turkey and Ukraine recently signed a contract for the construction of drones, an initiative that has upset the Russian Federation. What's new about these military contracts?

Bodnar: We have a strategic partnership with Turkey. We have a very good established relationship between presidents and economic cooperation, trade, etc. We are working on some existing drones, but also on creating a new one with a Ukrainian engine. So it is a joint venture and a new type of weapons equipment, which is mutually beneficial for both countries.

Does Turkey have an ambivalent policy when it comes to choosing between NATO and Russia?

Bodnar: Every country has its own interests. You could say that they do something in a different way. From the very beginning, regarding the conflict between Russia and Ukraine, Turkey declared its position: recognition of the integrity of Ukraine, not recognizing Crimea as a part of Russia, and support for the Crimean Tatars.

Regarding the Russian track, they also have some practical things: tourism, military cooperation, energy. Turkey's bilateral relations with Ukraine and Russia do not overlap. We prefer to have good relations with Turkey and a strategic partnership. We need to develop topics that are of common interest.

How can Ukraine and Romania work together to bring in Western investors to the Black Sea?

Bodnar: The most important thing is to create conditions. For us the basic problem was internal corruption and the situation with the courts; the system had to be improved to fight and prevent corruption. And now, if you could look at our system, we have the most improved system of anti-corruption branches, which should prevent, fight, and prosecute the corrupt. The system is also constructive, taking into consideration the Romanian experience. The other thing is internal reform linked to the judicial system and to change judges and to create an open and transparent judiciary.

Is the Association Agreement part of the Eastern Partnership?

Bodnar: It is part of the Eastern Partnership, but it was signed between the EU and Ukraine. We have bilateral relations that would help to strengthen this cooperation. It will bring Ukraine closer to the EU and open the door to integration. However, one of our six partners, Belarus, has officially rejected this partnership, and Azerbaijan has its own vision of partnership. We told the EU: Why should we take them on board and force them to do something they don't want to do?

As a result, we established this Trio Association (Ukraine, Republic of Moldova, and Georgia). Brussels supported it. We had a summit last month that went ahead with this format of three countries that would like to integrate closer and faster, and take on more responsibilities.

On the other hand, we do things outside of the Trio Association. We work directly with institutions, both bilaterally and through the Eastern Partnership. We are also interested in becoming a part of the Italian market. And now we have the results, because the EU accounts for the vast majority of foreign trade. In addition, other levels are being developed within the Eastern Partnership.

Has Ukraine's economic isolation from Russia been exacerbated by its association with the EU?

Bodnar: It was Russia's choice. This state started a war and the two countries' traditional cooperation came to an end. There is still trade and gas supplies, but they are incomparably smaller than they were before the war. Ukraine's traditional trading partner was Russia. Now that situation has changed and Ukraine has had to seek alternative markets. It was also a measure that stimulated us.

Do you believe the Russian Federation instigates conflicts in former Soviet countries in order to exert control over them?

Bodnar: Sure, there are similarities and differences. Russia is one of the things that everyone has in common. Russia, for example, fueled the Nagorno-Karabakh conflict. They instigated this conflict in order to gain control of these countries.

In our case, we must separate the issues. The first is Crimea, the occupied territory that was once part of Russia. The other is the conflict in Donbas. In this case, they exacerbated the military conflict by attempting to persuade the public that Russia had nothing to do with it. The same could be said for Transnistria and Georgia. The difference is that in our case, we are not dealing with a frozen conflict. The war continues, and the front lines have been crossed. The Russians instigated this conflict in order to exert influence over the country's foreign policy. We turned it down. We do have a political opposition that promotes a softer agenda than Moscow, but it is not supported by the citizens. Self-defense is very popular in our society.

Why was it so easy for some ex-Soviet countries to integrate into the West after the collapse of the USSR, but so difficult for others, like Ukraine?

Bodnar: The level of integration is the quick answer. There was a clear vision in the Baltic states — go to the West, join NATO — and the decision was made immediately. They surrendered their entire arsenal to the Russian army. Military forces withdrew from the territories.

It was different in our case, beginning with the military forces and ending with the level of integration of industries. The level of integration of Russian-speaking people was higher too. But, more importantly, the political elites were focused on Moscow. They envisioned a positive relationship with Russia. This was also the opinion of those within the military system. We had communists and businessmen with ties to Moscow.

In the early 1990s, the Russians also caused problems for Crimea. Let us not forget that we shared the same Crimean president at the time. Russia wished to reenact the Transnistrian conflict that occurred in Crimea in 1994. As a result, Ukraine took some time to move West.

This interview was conducted by Sidonia Bogdan, a freelance Romanian journalist with over 15 years of experience in the national press. ​​​​​She has written numerous investigative articles on alleged acts of corruption by politicians. She is particularly interested in issues of rule of law and specific foreign policy issues, such as Russian propaganda or authoritarian regimes.