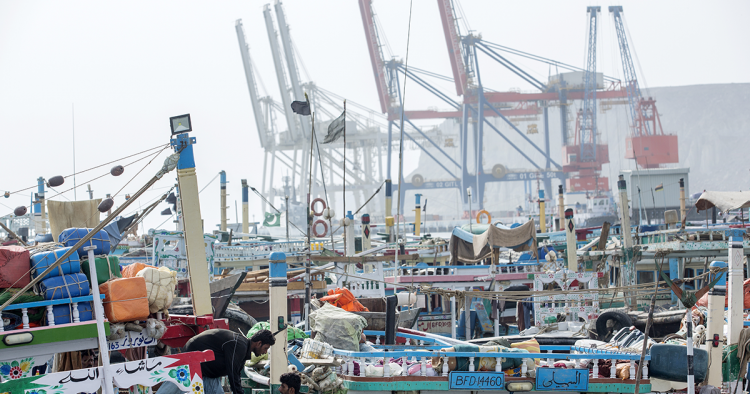 On April 8, the top U.S. diplomat in Pakistan visited the Chinese-operated port of Gwadar — the first such visit by an American official in 15 years. The move appears to be part of a campaign by Pakistan to promote its regional connectivity agenda and simultaneously signal that this effort isn’t solely wedded to China and its Belt and Road Initiative (BRI).

The U.S. official’s Gwadar visit comes after a public address delivered in March by Pakistan’s powerful army chief Gen. Qamar Javed Bajwa in which he stated that while the BRI-linked China-Pakistan Economic Corridor (CPEC) is “central” to Pakistan’s economic vision, seeing Pakistan exclusively through the prism of CPEC is “misleading.”

In spite of these moves, Pakistan’s pitch as a trade corridor continues to inordinately — and unjustifiably — emphasize China. For example, it invites countries like Afghanistan and Sri Lanka to “join CPEC” when it’s really just offering them to use Pakistan’s national highway network and ports to transit goods to or from countries other than China.

Such language also unwittingly creates the false impression that these road networks are mostly or entirely constructed by China. In reality, more of Pakistan’s National Highway network has been funded either by Pakistan itself or by other bilateral donors like the Japan International Cooperation Agency (JICA) and the United States Agency for International Development (USAID) as well as multilateral agencies, including the Asian Development Bank (ADB) and World Bank.

This is especially true for routes that would be used by Afghan transporters. A truck transiting goods from southern Afghanistan to Pakistan’s Karachi port would use a route funded in part by USAID through its $681.5 million infrastructure program for Pakistan’s former federally administered tribal areas region. And cargo dispatched from eastern Afghanistan bound for Karachi would use roads financed or constructed by South Korea’s Daewoo, as well as the ADB, the United Kingdom’s Department for International Development (DFID), and Pakistani private banks.

China’s aid and investment in infrastructure in Pakistan’s border regions connecting to Afghanistan are at the moment minimal. Aside from the Gwadar port and associated roads, China has balked at funding infrastructure projects in western Pakistan. Projects associated with the so-called CPEC Western Route have so far been exclusively funded by Pakistan.

Global development banks are not merely funding the construction of roads in Pakistan. For almost two decades, the ADB, World Bank, and other multilateral development banks have supported a comprehensive regional connectivity strategy that includes Pakistan: the Central Asia Regional Economic Program (CAREC). Two of CAREC’s 11 routes cross through Pakistan. The initiative has been active in helping regional states reduce bottlenecks and inefficiencies that add cost and time to the transit of goods between landlocked Central Asia states and seaports in the region, including in Pakistan.

For its part, USAID, through its Pakistan Regional Economic Integration Activity (PREIA) program, has also been aiding Pakistan in addressing some of the logistical barriers — including customs inefficiencies — to its development as a regional transit route. Pakistani officials often tout their country’s ports as the shortest route to sea for Afghanistan and Central Asia — and that is true in terms of distance, but not time. For example, according to a CAREC study, in 2019, it took an average of 45.6 hours for freight to clear a Pakistani border crossing, compared to around nine hours in Kazakhstan, Uzbekistan, and Turkmenistan.

The great powers are, of course, motivated by their geopolitical and security interests. For the United States, this has included stabilizing Afghanistan and adjacent border regions in Pakistan. And it is for geopolitical reasons that the Trump administration also supported Afghanistan’s use of Iran’s Chabahar port as an alternative to Pakistani ports, aiming to reduce Afghanistan’s dependence on Pakistan and boost India’s regional footprint. Top Trump administration officials also prominently referred to CPEC as part of their campaign against the BRI.

However, as the U.S. has moved closer toward a full withdrawal from Afghanistan, Washington appears to have stepped up efforts to promote Afghanistan-Pakistan cooperation, including on trade and transport. And even during the tilt toward Chabahar, U.S. funding for projects like PREIA continued. U.S.-backed major global multilateral banks also remain invested in strengthening the development of a Pakistan transit corridor. The ADB and World Bank — and the government of Pakistan — are funding the Khyber Pass Economic Corridor, improving road networks that link Afghanistan and Central Asia to Pakistan’s highways and seaports.

Beijing, in contrast, has notionally embraced the idea of integrating Pakistan with other countries in the region, but has yet to back those efforts directly with its financial muscle, though some of its current investments may indeed help improve Pakistan’s trade with neighboring states.

CPEC remains, in principle, a bilateral connectivity project. And even its stated aspirations of emerging as an actual Sino-Pak trade corridor may never materialize, in part due to questions over the economic viability of related infrastructure projects and the ability of the Pakistani state to manage the debt burden. A major segment of the Karakoram Highway linking China and Pakistan — from Thakot to Raikot in Gilgit-Baltistan — stands in disrepair. The project to upgrade the road was proposed many years ago, but has yet to be tendered.

Plans to reconstruct Pakistan’s main railway line, the ML-1, have also stalled for years as Beijing and Islamabad struggle to come to agreement on loan terms. The ML-1 runs from Pakistan’s port city of Karachi north through its eastern corridor, ending in the northwestern city of Peshawar. There are proposals to eventually connect it to the border with China, but the costs of such a project may be prohibitive.

Pitching Pakistan as an Asian gateway

When CPEC was first announced in 2014, Pakistan was reeling from jihadist terror attacks. It had just launched its last major military operations in the tribal areas near Afghanistan. Islamabad understandably latched on to CPEC to attract foreign investment, stimulate its economy, and change the international narrative on Pakistan.

But imposing the CPEC brand on all trans-Pakistan transit trade creates the false impression that the use of Pakistan’s infrastructure involves joining a Chinese-led geoeconomic order. It also misrepresents Beijing’s commitments toward developing Pakistan as a transit hub. And it ignores the fact that multiple regional and international stakeholders are promoting Pakistan as a trade corridor.

A more prudent approach for Pakistan is to rebrand itself as an Asian gateway — with CPEC as a constituent element of Islamabad’s national transport and regional connectivity strategies. CPEC, in spite of its flaws, remains an important vehicle for improving Pakistan’s logistics infrastructure and attracting foreign direct investment, especially toward export-oriented special economic zones.

Firmly subsuming CPEC within overarching connectivity and trade policies will add coherence to Pakistan’s policymaking, lower the financial and geopolitical risk to its connectivity drive, and better enable it to explore synergies between its many development partners.

For example, legislation has been proposed once again in Congress to allow for the duty-free import of textiles and apparel goods from designated “Reconstruction Opportunity Zones” (ROZs) in Afghanistan and adjacent border regions in Pakistan. The bill is unlikely to pass. And restricting duty-free coverage to Pakistan’s border regions — outside its major industrial hubs — is a poor idea. Nonetheless, should the bill become law, it is worth considering how the ROZ designation could be used to complement or bolster the under-construction CPEC special economic zone in Rashakai, located in Pakistan’s Khyber Pakhtunkhwa Province.

Inimical voices outside Pakistan, especially in India, are likely to pounce on any shift in Pakistan’s emphasis on CPEC, portraying such a move as reflecting a weakening of Sino-Pakistan relations. But that is no reason to avoid a change in strategy. Pakistan can reframe its connectivity push while also signaling that it is not abandoning China. Beijing may indeed be very receptive to the idea as it could help bring Islamabad’s expectations of Chinese financing back to realistic levels.