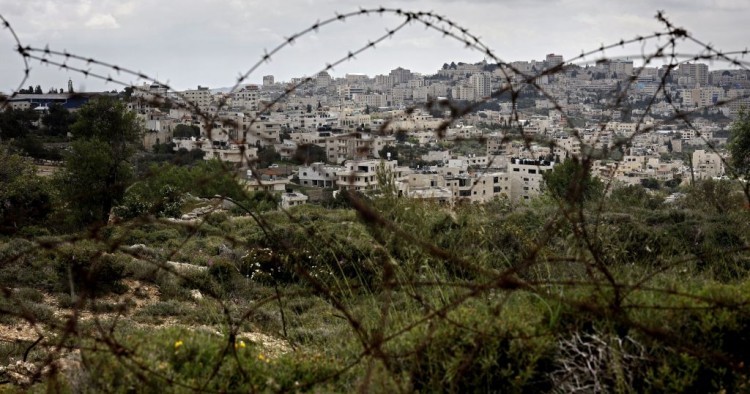 As Americans embark on the long-delayed journey of reevaluating and recontextualizing their (post-)Civil War history and the legacy of slavery, they have been joined by other nations and peoples confronting the historical roots of their own societal inequalities. The required implementation of cross-community dialogue to effectively adopt the changes needed to reckon with a partial history, however, does not extend to all. Subjected to ongoing subjugation both inside Israel and the Occupied Territories, Palestinians continue to face the deliberate erasure of their physical past and, in defiance of international law, a disregard of their legitimate historic (ownership) rights. With the impending U.S.-supported annexation of West Bank territory, Palestinians living in these designated areas stand to lose not only their long-held aspirations for an independent state, but further eradication of their presence — a “spacio-cide” — in support of an Israeli-envisaged demographic and political vision.

Backed by the White House and with apparent domestic parliamentary support, Israeli Prime Minister Benjamin Netanyahu will likely make good on his 2019 electoral promise to impose Israeli sovereignty over up to 30 percent of the West Bank. The expiration of Netanyahu’s July 1 deadline for annexation in the midst of coalition rifts and American wavering thus appears to delay — rather than cancel — such a unilateral move. Alternate Prime Minister of Israel and Minister of Defense Benny Gantz’s opposition to annexation, for instance, centers on the desire to prioritize the current health and related economic crisis. As part of his campaign, Gantz pledged to annex the Jordan Valley with the caveat that such a move would be in “coordination with the international community.” U.S. President Donald Trump’s recently-published Middle East peace plan already endorsed the Israeli annexation of large settlement blocs, and current equivocation on the part of administration officials appears the result of concerns regarding national and international pushback at a time when the president is already facing an onslaught of criticism for mishandling the coronavirus pandemic and mass protests, among other issues. Electoral deliberations, in addition to evangelical lobbying, might prove decisive in providing the final green light. Recent polls indicate majority support among Republicans (56 percent), and in late June, GOP lawmakers voiced their support for annexation, claiming that “Israel has the right to make sovereign decisions independent of outside pressure.”

Many unknowns still surround annexation plans; Netanyahu’s vision of annexation does not necessarily match that of his U.S. counterparts, who still claim a cursory — if wholly unviable — commitment to the two-state solution. The failure of the U.S. administration’s “Vision for Peace” to mention 13 Palestinian communities in the Jordan Valley thus invariably heralds the creation of walled-off enclaves surrounded by Israeli settlements. Questions concerning the legal status of Palestinians in the to-be-annexed areas similarly remain unresolved and the subject of Israeli political dispute. Nevertheless, it is undeniable that the imposition of sovereignty will have dire consequences for the Palestinian areas and lives and livelihoods affected — even in Area C, where a de facto annexation already exists under Israeli military control. At the same time, historical trends of land expropriation and appropriation demonstrate that deliberate efforts to obfuscate Palestinian history and former inhabitants’ presence tend to follow the imposition of Israeli sovereignty.

The establishment of the Israeli state in May 1948 following a civil war in Palestine went hand in hand with the erasure — and conversion — of the Palestinian landscape. As the prominent military leader and politician Moshe Dayan noted during a lecture at the Technion Institute in March 1969: “The Jewish villages have replaced the Arab villages, and today you would not be able to know even the names of those Arab villages […] the entirety of Arab villages themselves have no more existence.” Indeed, of the 418 depopulated villages discussed by Walid Khalidi in his ethnographic study “All that remains,” 293 (70 percent) were totally destroyed and 90 (22 percent) were largely destroyed through a combination of military and legislative steps. Consequently, for the approximately 250,000 Palestinians who remained inside Israel in the wake of the war, some of whom were internally-displaced and became “present absentees,” the past is both metaphorically and quite literally, in the words of the historian David Lowenthal, “a foreign country.”

The physical palimpsest, while certainly not a unique phenomenon in the long history of the holy land, not only sought to make the absence of Palestinian refugees permanent, but equally imposed on the landscape a narrative of uninterrupted Jewish presence. Moreover, when vestiges of the Palestinian landscape remain, as is the case for the former Palestinian locality of Lifta, a deliberate lack of signposting has led many Israelis and visitors to assume they constitute the remains of a more distant history. Attempts to memorialize Palestinian dispossession in the wake of the 1948 War and lay claim to an effaced or obscured past, including through return visits to former Palestinian villages and annual Nakba day rallies, have routinely been subject to Israeli counter-protests, legislative checks, and organized suppression.

The intentional demographic conversion of East Jerusalem over the last five decades provides further insight into the ramifications for Palestinian life upon the imposition of Israeli sovereignty. When Israel formalized its annexation of the eastern half of Jerusalem in 1980, claiming “Jerusalem, complete and united” as its capital, the state had already embarked upon a process to change the make-up of East Jerusalem in line with its demographic and political vision. The 218,000 settlers that live there today are, inter alia, the result of systematic discrimination and bureaucratic inertia. This latter-mentioned practice includes the unequal allotment of building permits and the related demolishing of so-called “illegal structures.”

Peace Now, an Israeli human rights group, found that between 1991 and 2018 Palestinians were granted less than half the building permits (9,536) in East Jerusalem despite making up 60 percent of the population there. Conversely, Jewish settlements, built either entirely or partly on private Palestinian property, received 21,834 permits. B’Tselem, another human rights group, revealed that in 2019, 169 Palestinian houses and non-residential structures were demolished in East Jerusalem, more than any year since 2004 and almost three times the number of structures razed without permits in 2018.The increasing power of settlement movements in East Jerusalem has also had a profound effect on Palestinian lives, driving evictions and the repurposing of Palestinian land and property. In January, the Jewish settler organization Ateret Cohanim won a lawsuit against a Palestinian family on the grounds that they resided on land, known as the Baten al-Hawa enclave of Silwan, previously owned by Jews until 1938, when British authorities ordered the residents out. The successful legal invocation of a Jewish “Right of Return” could set a precedent for a further eviction of some 700 Palestinians living in the Baten al-Hawa neighborhood.

The above trends, in addition to experiences under Israeli security and administrative control in Area C, offer a disturbing picture of what may lie ahead for Palestinians living in the Jordan Valley. Even now, Palestinians are barred from using 85 percent of the Jordan Valley; on the land utilized and resided upon by Palestinians, demolition of (non-)residential units, including agricultural structures, and forced (temporary) evacuations to enable Israeli military exercises, ensure limited Palestinian economic development and impede daily life. Despite claims by Prime Minister Netanyahu that his plan “doesn’t annex a single Palestinian,” 47 shepherding communities consisting of 4,391 Palestinian residents currently lie in parts of Area C to be annexed. The area also includes roughly 62,000 acres of private Palestinian land, including 5,000 acres previously seized by Israel for security reasons and — in spite of a 1979 Israeli High Court ruling barring the exploitation of security-related land seizures — utilized to establish Israeli settlements.

Similarly to the 1967 Allon Plan, Netanyahu has sought to justify the proposed annexation of the Jordan Valley on strategic grounds; the Jordan river, according to this premise, would become Israel’s defense border, its “Iron Wall.” Nevertheless, as a sparsely populated region replete with natural resources and vast economic potential, the Jordan Valley offers Israel more than just a key security asset. An opinion piece in Israel Hayom by Maj. Gen. Gershon Hacohen testified to this understanding, arguing that “the Jordan Valley in its full geographical scope can house millions of Israelis and provide a location for national infrastructure that cannot be compressed into the coastal plain.”

The imposition of a de jure annexation will add a warped Israeli-dictated legality to contemporary inequalities. As a result, across the areas slated for annexation — and particularly in the Jordan Valley — Palestinians are likely to see a further encroachment on their lives and livelihood in an attempt to create an expanded Israel without, in Netanyahu’s vision, offering full rights and protections to the affected citizens. For a land repeatedly scarred by war and displacement, the consequential new reality will add another chapter to a history that will, itself, one day require a more honest reckoning.

Grace Wermenbol is a non-resident scholar at MEI who specializes in the contemporary geopolitics of the MENA region. The views expressed in this piece are her own.