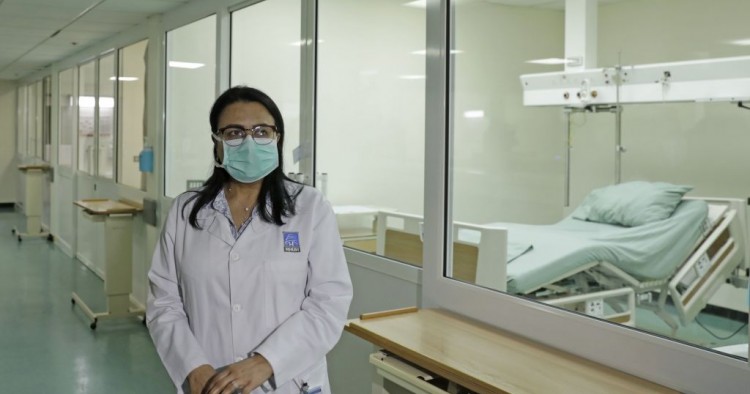 The current COVID-19 pandemic has had an unprecedented global impact. In many ways, everyone has been affected by this collective crisis, and everyone is at risk. However, both the virus and its aftermath discriminate strongly against women and girls.

I have spent my career as a humanitarian aid worker in insecure environments around the world, supporting women to mitigate the risks they face in those settings — notably as a result of a more hidden global pandemic, violence against women. Everywhere I have worked, from Afghanistan to Mali to Haiti, women and girls suffer more. It does not matter whether this is due to a conflict, a natural disaster, or an epidemic.

In the Arab region, where I now work, women were vulnerable before the crisis. And their crisis is just beginning. The Arab region is plagued by a range of socioeconomic instabilities and protracted humanitarian crises, with more than 62.5 million people in need of humanitarian assistance. The pandemic is simply the latest in a series of challenges facing the region. The Arab region also suffers the world’s worst social indicators, with wide gender gaps across health, education, politics, and the economy. All of these are exacerbated by instability, crises, and the current pandemic.

The feminization of women’s work

Worldwide, this pandemic will have greater impacts on women when it comes to work, with more women facing redundancies while more men will find their jobs protected or adjusted to accommodate this new way of working.

In the Arab region, the pandemic is expected to result in the loss of 1.7 million jobs, including approximately 700,000 jobs held by women. But female participation in the labor market is already weak, with unemployment among women reaching 19 percent in 2019, compared with 8 percent for men. The informal sector will be particularly hard hit by the pandemic. 62 percent of active women work in the informal sector, where they have fewer protections and face even greater risks.

Women are the world’s carers — they risk increased exposure to infection both in their personal and professional capacities. Arab women make up the majority of the region’s health care practitioners and family caretakers, performing unpaid labor and exposing themselves to infection in order to care for a sick child, an elderly family member, or a needy member of the community. In the Arab region, women perform nearly five times as much unpaid care work as men. In every emergency I have worked in, women are the ones who know who is in need, what they need, and how to get it to them. They are the world's social safety net.

There is opportunity in this global crisis — a chance to recognize and value women’s work. The Arab region holds very traditional, largely patriarchal, views of what constitutes “productivity.” Labor, both domestic and professional, is gendered, with women relegated to traditionally “feminine” roles. This feminization of women’s work places both women and men at a disadvantage, creating an artificial juxtaposition between what is valued and what is not. With everyone now working from home, domestic divisions of labor are brought into plain view.

Integrating the personal and the professional

Ideas of work/life balance are now also coming to the fore. Previously, we existed as if our domestic and professional lives were neatly compartmentalized, operating in parallel as two separate entities. Now we have been forced — wonderfully! — to integrate our personal and professional lives. Crying babies are dealt with while on Zoom calls. Dogs jump into view on screens. Family members wander around the house during videoconferences. We are brought into peoples’ homes and lives in unprecedented ways.

In the Arab region, there is generally less acceptance for telecommuting, working from home, flexible hours, and so on. These aspects are critical to the creation of woman-friendly work environments and will ensure that more women join — and remain — in the working world. Pre-COVID, our home lives were not “allowed” to interfere during office hours. A sick child or a needy family member had to be dealt with “on our own time.” Women’s premature departure from economic life is also due to the lack of breastfeeding spaces and quality childcare. This is a sector that is staffed almost entirely by women, many of whom are underpaid and undervalued.

In the Arab region, there is also less shared housework and parenting. We could use this time at home for men to take on an equal share of household work and childcare — “jobs” previously relegated to women. The global “sudden spike in childcare” is currently being felt by women, but men now have the opportunity to step up and play a greater role in the lives of their children. Will it happen in the Arab region? I’m not so sure. But the opportunity is there. Let us start by ceasing to celebrate husbands for “helping” their wives with housework or occasionally “babysitting” their own children. Let us also recognize that women’s work at home IS work — and should be viewed and valued as such.

From patriarchy to feminist economy

And perhaps this new way of working will allow us the space to merge all aspects of our lives, creating a more woman (and family) friendly work environment that is built on flexibility. Let us use this opportunity to un-learn some of the harmful (and not altogether productive) methods of work that prioritizes “busyness” while watching the hours pass until clock-out. Imagine a work/life balance built on the freedom to govern our own time, and to work within a manageable, deliverables-based framework.

COVID-19 presents an opportunity for men, families, society, and the economy to reconsider women’s work, to recognize their contributions, and to transform the ecosystems in our home and workplace, transitioning from a patriarchal to a feminist economy that integrates health, family, and informal labor into economic ecologies.

The personal is, and will always be, political. This pandemic has exposed our interconnectedness and blurred personal/professional lines. Our lives are no longer siloed, and we all stand to benefit from this cultural pivot — yes, men too. Let’s start by no longer apologizing for having lives outside of work, and by redefining “productivity” to reflect our new reality.

Dr. Lina AbiRafeh is the Executive Director of the Arab Institute for Women (AiW) at the Lebanese American University. Lina spent over 20 years in development and humanitarian contexts in countries such as Afghanistan, Haiti, Democratic Republic of Congo, Nepal, and others. Her specific expertise is in gender-based violence prevention and response, summarized by her TEDx talk and other presentations. She speaks and publishes frequently on a range of gender issues such as gender-based violence, the need for a feminist response to the COVID-19 pandemic and its impact on Arab women and girls. In 2018 and 2019, Lina was listed as one of the Gender Equality Top 100 worldwide. The views expressed in this piece are her own.