The Persistence of the Police in Egypt 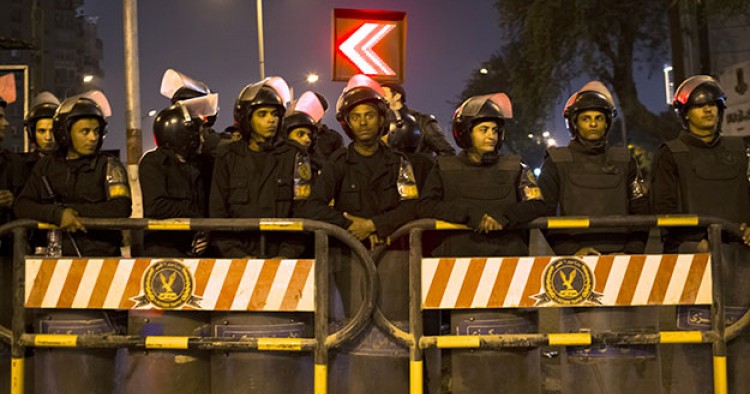 The fact that millions of Egyptians welcomed back the military and the police in order to depose Morsi and his Muslim Brotherhood in early July has given the police a regained sense of control and authority. As such, they have returned to the streets in large numbers and, moreover, have been implicated in the shooting deaths of protestors calling for Morsi’s reinstatement.

The police are also being given formal powers by the new government that they have not seen in two and a half years. Last week, Egypt’s interior minister announced the reinstatement of a number of secret police units that had been ostensibly shut down after the January 25 revolution. Such units were well-known for their brutality against Islamist and other opposition groups under Mubarak.

Yet the reality is that the police and their violent tactics never abated after 2011, and we are now only seeing a more obvious and public use of them by the new regime. The emerging order following June 30 is apparently allowing the police to return to the forefront of political oppression they practised under Mubarak and SCAF, as opposed to the social oppression it undertook to a greater degree under Morsi.

The Police under SCAF and Morsi

Under both SCAF and Morsi, police violence returned to pre-January 25 levels. The El Nadeem Center for Rehabilitation of Victims of Violence, for example, documented 163 cases of extrajudicial killing and 10 cases of torture by the police and state forces during 2012[1]—similar numbers to what would have been found under Mubarak.

Toward the end of 2012, police brutality took somewhat of a different form. Police became hesitant to confront violence in overtly political protests unless officers were themselves attacked, seemingly unwilling to work for an authority they never truly accepted. During the clashes between Morsi’s supporters and opponents in November and December, for instance, police did not intervene to stop the bloodshed or the cases of torture that took place afterward.[2] Then, in January, 42 people (including two police officers) were killed in Port Said when violence broke out after a court delivered a harsh ruling on the killings at a football match a year earlier. NGOs reported that police began shooting after being subjected to gunfire, and they continued to fire even after the threat receded.[3]

But perhaps the most noticeable aspect of police activity post-Mubarak has been officers’ crackdowns on demonstrations calling for workers’ rights and better economic conditions. Such demonstrations were averaging 44 protests per day in 2012 in March alone,[4] and cases in which the police forcefully dispersed labor strikes, sit-ins, or relatively small protests outside provincial government buildings increased dramatically. In February 2013, riot police and central security forces broke up a workers’ strike in an Alexandria cement factory by entering the building and setting police dogs on the workers.[5]

Such police activity was met with approval from those in government. SCAF leader Mohamed Tantawi commended the police for its “new mindset” on the first anniversary of the revolution.[6] On the second anniversary, Morsi went further, stating that the police were “at the heart of January 25…God wanted the start of the revolution to be the anniversary of the police in recognition of its battle with colonialism.”[7] Morsi also credited the police as being a key actor in the country’s journey toward stability after his election to office in June 2012.

It is perhaps not surprising that Morsi’s government took such a stance. While much of the political analysis and rhetoric of the opposition focused on the “Ikhwanization” or “Brotherhoodization” of the police and the state, the opposite was in fact true. Rather than taking control of institutions and implementing changes, the Morsi government pursued policies that aimed to preserve the status quo. Both of Morsi’s interior ministers as well as their aides were key figures under Habib el-Adly, the loathed ex-minister who was sentenced to life in prison for corruption and conspiring to kill protestors during the January 2011 revolution. In addition, a number of security sector reform plans that were submitted to Morsi and parliament—calling for, for example, greater civilian oversight of police forces and restrictions on the use of firearms—were rejected or ignored.[8] Essentially, Morsi and the Muslim Brotherhood failed to come up with an alternative to the state structures already in existence—and that now continue to exist.

There were several reasons behind the authorities’ resistance to reforming the security sector. On the socioeconomic level, the government faced problems[9] such as rising inflation and unemployment, and was therefore happy to allow the police to crush rising labor action while the economy spiralled out of control. The Morsi administration also understood that Mubarak’s regime had not really collapsed. Rather than clash with it, Morsi and his aides worked with the feloul (regime remnants), including the security sector, in an unholy alliance in order to push ahead with their own socioeconomic policies. Of course, this Brotherhood/feloul alliance was unsustainable—as Morsi and the Brotherhood have since learned.

Not only police action but the discourse of its necessity flourished under Morsi. The Ministry of Interior created a public relations unit to communicate a message that usually revolved around the police fighting a random attack by baltagiyya (thugs) on state institutions. The president gave a free hand to the security forces[10] to fight these “thugs” in order to protect “legitimacy” and restore hayybat al-dawla—a rarely-used term that may be roughly translated as “the prestige of the state.” Such discourse was similar to the way SCAF often described its security forces as combating “foreign elements;”[11] as such, a violent “other” was always employed in order to justify violence. In September 2012, the Morsi government even announced that it was working on a “law to protect society from dangerous people,” which would have allowed the police sweeping powers.[12]

It is clear that the state used such security discourse to legitimize itself and delegitimize protests against it.[13] Since 11 February 2011, social mobilization, when directed against the state, was caricatured as criminal or opportunistic, which marginalized the space in which to express socioeconomic grievances for which Egyptians had fought so hard.[14] In turn, the discourse emphasized the idea of protests and labor action as obstructive and unnecessary, and that the state—including its security apparatus—is the sole body capable of protecting and envisioning the country’s future.

This frame is continuing, and in an even more public and forceful manner, as with the ousting of Morsi the Egyptian military is engaging in a discourse that associates terrorism with the Brotherhood in order to legitimize its realignment of the security sector-citizen relationship. Associating the Brotherhood with terrorism allows the military and police to use full force to preserve Egypt’s national security, which shifts the public debate to stability and away from human rights and democracy.

The problem with the military’s actions and narrative lies in SCAF’s failure to acknowledge that the old state’s authority was killed during the revolution and that people want to be governed differently, even if the form of that government remains unclear. Seeking “stability” through a confrontational approach only marginalizes social movements concerned with basic socioeconomic rights, as it frames these movements as a threat to security. Moreover, using “anti-terror” language is no longer enough to quell public dissatisfaction in the long run. While such language may for the time being convince some to combat the Muslim Brotherhood and other “undesirables,” the Egyptian economy is still fragile, and strikes focusing on socioeconomic grievances are continuing.[15] Labor protestors are not going anywhere.

Reforming the security sector must be a priority for any future authority. However, at present, reform seems unlikely given the military’s focus on national security and the deep political deadlock. The police have also managed to portray themselves as part of a reformed body that is fighting to protect citizens from “terrorism.” Such actions weaken the likelihood, in the medium term, of efforts to investigate and reorganize the police system so as to weed out corruption and lessen violence.  Security sector reform must, however, become a long-term target for those in power. The narrative of security must also be amended. Changing the way security is defined in Egypt—as a necessary part of the state that exists to crush a criminal and opportunistic citizenry—must be revised. Otherwise, successive governments will continue to alienate themselves by criminalizing large sections of the population, only begetting further violence and chaos.

[14]             D. McKinley and A. Veriava, Arresting Dissent: State Repression and Post-Apartheid Social Movements (Johannesburg: Centre for the Study of Violence and Reconciliation, 2005).