The Pillaging of Syria's Cultural Heritage 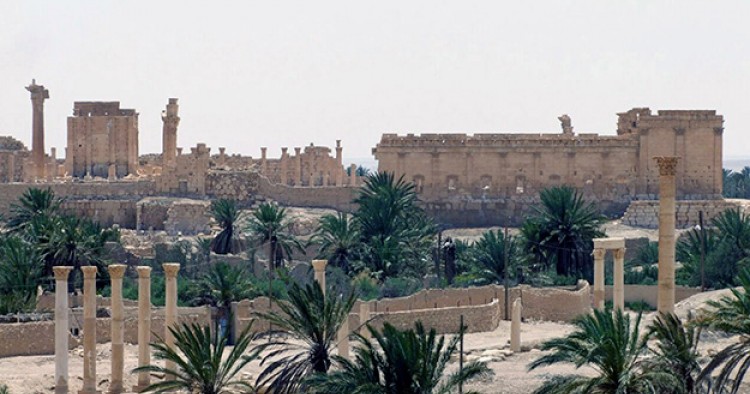 Since March 2011 Syria has gone through a traumatic process that has strained the ethnic, sectarian, and social fabric of the country—almost all that makes Syria a unified state with a people who share a common history, goals, and aspirations—to beyond the breaking point. Much of the country lies in ruins today, and its cultural heritage has been a deliberate casualty of the conflict from its earliest days.

The changing nature of the conflict in 2012 to one of armed confrontation between regime and opposition resulted in a power vacuum and breakdown of law and order in many parts of the country. This situation, coupled with the collapse of many basic services traditionally provided by the state, helped facilitate damage to Syria’s cultural heritage. A local population desperate for sources of income intensified looting at such sites as Apamea, Dura-Europos, and Mari, particularly early in the conflict. This has been clearly demonstrated in the before-and-after satellite imagery taken of the sites. The fighting has also damaged archaeological sites and monuments; ongoing military operations from both sides have left many in ruins. Much of the old city of Aleppo and the Crusader castle of the Krak des Chevaliers, UNESCO designated world heritage sites, have suffered severe damage.

Then there are the documented instances of deliberate, punitive destruction and looting of sites and monuments. This latest threat to Syria’s cultural heritage comes from the extremist group ISIS, which is iconoclastic in its approach to cultural heritage. Yet the picture emerging today from areas controlled by ISIS is far more complex than the simple narrative often portrayed in the media, as ISIS has a clear evolution in its approach to the looting and destruction of antiquities.

When ISIS began to occupy the large swathes of territory it currently controls in Syria in the latter half of 2013 and early 2014, it came upon an already-thriving trade in looted antiquities. Recognizing a potential source of income, it initially permitted locals to continue looting these sites and imposed a 20 percent sales tax, also known as khums, on any transactions. Shortly afterward, ISIS began to increasingly take control of the process by regulating access to sites and threatening to impose penalties for non-payment of khums. By the summer of 2014 ISIS was issuing digging permits or licenses and hiring contractors to loot sites in areas under its control.

In the fall of 2014, as part of ISIS’s aggressive expansion into the illicit antiquities trade, the group established the Manbij Archaeological Administration (MAA) in the city of Manbij (close to the Turkish border) to manage and organize the systematic looting of archaeological sites in the region. Through the MAA, ISIS intensified its activities and became increasingly engaged directly in the looting, as opposed to its earlier reliance on locals and contractors. The MAA now organizes the sale and transfer of artifacts it acquires directly through its own digging operations and has established a network of approved dealers to whom the looted antiquities are sold, with middlemen facilitating the sales. The MAA also routinely uses earth-moving machinery, including bulldozers and trucks, to accelerate the digging and recovery process, which intensifies the amount and rate of destruction to archaeological sites. Many sites have been deeply scarred as a result of this highly aggressive practice.

This evidence indicates that the control and sale of looted antiquities is extremely lucrative, well worth the time and financial investment by ISIS. ISIS is clearly involved and profiting at every level from the illicit trade of antiquities—from their initial extraction from the ground to their final sale and exit from ISIS-controlled territory.

2015 heralded a darker and more sinister manifestation of ISIS’s control and exploitation of cultural heritage, this time in Mosul in neighboring Iraq. In what can only be described as cultural atrocities, ISIS very publicly set out to destroy the contents of the Mosul Museum and the archaeological sites of Nineveh and Hatra (most likely extensively looting them as well). These atrocities shocked the world, allowing ISIS to demonstrate its ability to act with impunity and illustrating the impotence of the international community to prevent the atrocities.

Today as ISIS occupies the city of Palmyra in Syria, a UNESCO-designated World Heritage site, fears abound as to what fate awaits these majestic ruins. Will they be pillaged for profit, fall victim to another cultural atrocity, or both? There is no doubt that the ruins of Palmyra offer a real opportunity for ISIS to loot, as the rich archaeological site and museum offers substantial profits with plenty left over for a public atrocity. If this happens, ISIS’s ability to act with impunity and the international community’s inability to stop it will again be clearly demonstrated.

ISIS is likely the wealthiest radical terrorist organization in contemporary history, with widely diversified sources of income. Stopping the highly lucrative illicit trade in antiquities is imperative not only because it is a major source of income for terrorist organizations like ISIS, but also due to the irreparable damage it is causing to Syria’s cultural heritage.

The importance of this cultural heritage is clear when it comes to the issue of national identity, that is, what makes a Syrian a Syrian. Syria has a resilient sense of identity based on the concept of a shared citizenship around a common history, supported by a celebrated culture. Once the current violence ends, the people of Syria will need to find ways to reconnect with symbols that once united them across religious and political lines. The country’s ancient past, represented in its rich cultural heritage, is key to this. Protecting and preserving Syria’s history and heritage is thus also about safeguarding its future.