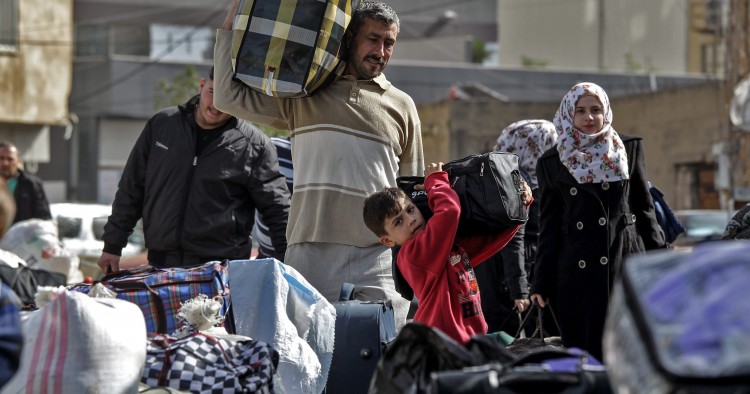 This essay is part of a series that explores the human costs and policy challenges associated with forced displacement crises in the Middle East and Asia. The essays explore the myths or misconceptions that have pervaded discussions about these crises, as well as the constraints or capacity deficiencies that have hampered the responses to them See more ...

Political systems and politicians influence the situation of refugees in host countries. This is true everywhere. Refugee policies are crafted by local politicians who often wrap around them their own partisan interests and motivations. This essay explores the political complexities of the country hosting the highest number of refugees per capita worldwide. The view from Lebanon for Syrian refugees is bleaker than ever and is largely caused by the politics of Lebanon, a country which is governed by a sectarian power-sharing system. Recently, Lebanese politicians who often appear divided over everything have displayed a broad consensus that Syrian refugees should return home immediately. Spearheaded by the Free Patriotic Movement’s (FPM) Foreign Minister Gibran Bassil, these calls for return also question and discard the notion of voluntary return. There appears to be a push towards immediate return, even if it is forced. Increased anti-refugee sentiments and statements are now a daily facet of life in Lebanon. Syrian refugees are blamed for stealing jobs, land, and even for increased cancer rates.

Not only are these recent developments dangerous both to the status of refugees as well as host communities, but they are also far removed from the political complexities of return to Syria. While the international community has done its fair share of providing aid to Lebanon,[1] it continues to fail to address the root causes of the questions and complexities of return to Syria. In fact, continued praise about the resilience of Lebanon has swayed international pressure away from the need for Lebanon to respect international law and protect the rights of refugees. Instead, rampant corruption and sectarian rhetoric paired with political complexities now threaten the lives and futures of Syrians residing in Lebanon. I outline two of these major complexities below and explain their implications on Lebanese and Syrians residing in some of the country’s most impoverished areas.

Lebanon’s internal schisms among its ruling political elite manifest in Lebanon’s schizophrenic foreign policy positions on Syrian refugees. Hezbollah, FPM, and their allies see the Syrian regime as a friend to Lebanon and recognize Asad as its legitimate President. Hezbollah has fought side-by-side with the Syrian regime against so-called terrorist groups causing havoc in Syria. Future Movement, Progressive Socialist Party, Lebanese Forces and their allies see the Syrian regime as a foe of Lebanon and accuse it directly for its involvement in a string of assassinations, including that of former Prime Minister Rafiq Hariri. Division over the regime in Syria has translated into a divided policy regarding diplomatic relations with the Syrian regime. One political alliance calls for normalization of ties with the Syrian regime and immediate dialogue about the status of refugees, while the other still questions the legitimacy of Asad and refuses to enter into direct negotiations. Lebanon’s foreign policy is also revealing of deep political cleavages concerning its relations with the international community and international donors. On the one hand, Prime Minister Hariri has reiterated Lebanon’s commitment to upholding international law and humanitarian principles. Hariri has attended international conferences and sought to obtain more funding for Syrians and for host communities to alleviate socio-economic grievances of impoverished areas across the country.[2] On the other hand, Lebanon’s Foreign Minister now accuses the UN Commissioner for Refugees (UNHCR) of trying to nationalize Syrians and keep them in Lebanon.[3] Foreign Minister Basil and his party FPM have been leading a political campaign in the media asking that funding be directed to Syria and stopped from Lebanon. He has also repeatedly stated that Lebanon does not recognize Syrians as refugees and that refugees should return immediately. Different political groups pursue support from foreign states which have competing interests in the region and make it very complicated for Lebanon to negotiate the safe and voluntary return of Syrians. Meanwhile, heated demands for immediate return without a clear roadmap and international protection or support, leave refugees stranded in political limbo.

Depending on their position towards the conflict in Syria, Lebanese politicians interpret the presence of safe zones within Syria very differently. Hezbollah and FPM and their allies consider that the conflict has nearly ended and that Syrians can immediately return to a safe and almost prosperous life. Future Movement and other actors disagree and stand with the international community, claiming that Syria is still not safe. The interpretation of safety is a tricky political game. Absence of large-scale violence and use of chemical weapons does not necessarily translate into safety. Refugees are not a monolithic entity. Among refugees there are large numbers of asylum seekers who would still not be safe returning to Syria, as well as women widows, children, elderly, unemployed, disabled, and so on. Safety for different segments of refugee populations mean very different things. International law is very clear about forced repatriation: return must be safe, voluntary, and sustainable. In pushing for immediate return to unsafe areas, the Lebanese government and political class might not only threaten the lives of refugees but in doing so might also dissuade other refugees from returning. Another possible scenario is that forced return based on the insistence of safety in Syria could lead to upheaval and local tensions. Lebanon’s quasi-stability rests on very thin, very feeble, ice. The portrayal of refugees as having a clear choice of returning to Syria but refusing to return fuels tensions at the local community level. With no right of employment and decreasing aid because of donor fatigue, Syrian refugee families struggle to put food on the table. While the education system has been able to absorb a percentage of children by organizing afternoon shifts, many children still have no access to schools. Deteriorating political conditions coincide with deteriorating economic conditions and a faltering public infrastructure. Last winter, many refugees, including infants, died in snow storms because of substandard shelter. Lebanon’s massive garbage crisis and utter failure of its government to address it has resulted in open dumping and burning, causing severe health hazards. Saying that Syria is a safe haven and that refugees just prefer to live here is irresponsible political discourse that threatens the stability of Lebanon, its citizens, and all those residing in it.

Politics everywhere affects refugee policies, but the dysfunctionality of Lebanese politics may put this country at grave risk. Great attention and resources have been given to addressing the humanitarian and basic needs of refugees and host communities. But no efforts have been made to focus on the political problems that caused this crisis in the first place. Nor have efforts been made to address the political drivers of a potential solution. To create a roadmap for the return of Syrian refugees, the conversation should be about politics, as much as it is should be about human rights. For a country like Lebanon, a rights-based discourse embedded in international law is futile. This is a country where its own women are not protected against domestic violence, harassment, and aggression. This is not a country that responds to rights or needs. The conversation should be about politics and how Lebanon’s political system, with all its complexities and shortcomings, may be used to raise national consciousness about the severity of the situation. A new political discourse must frame the protection of refugees as the core interest of Lebanon first and foremost. Lebanon’s interest lies in a truly safe and stable Syria. Until then, Lebanon’s best interest is not in forcing return but in organizing a roadmap and developing internal consensus on key issues that can either speed up or challenge the return of Syrians.

[1] See Carmen Geha and Joumana Talhouk, “From Recipients of Aid to Shapers of Policies: Conceptualizing Government–United Nations Relations during the Syrian Refugee Crisis in Lebanon,” Journal of Refugee Studies (2018). https://doi.org/10.1093/jrs/fey052.