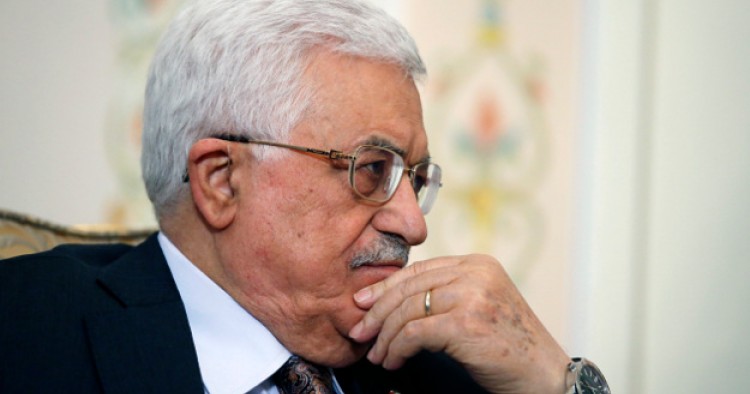 In the coming months, we can expect that Palestinian President Mahmoud Abbas will no longer occupy the executive leadership position in the muqata, the interim Palestinian government headquarters in Ramallah. His age and his repeated insistence that he does not plan to run in new elections, as well as his most recent comments about his willingness to resign, point to this fact.

With the passing of Yasir Arafat in 2004, the 80-year-old Abbas is the last remaining senior founder of the ruling Fatah movement, launched 50 years ago. That these two individuals are the pillars upon which the Palestinian national moment was established is clear from the recognition given to them by the vast majority of Palestinians today.

Abbas and Arafat, however, are different in their rhetoric, tactics, and even in their attire. Arafat led the Palestinian struggle for the liberation of Palestine by primarily using the revolutionary’s gun. When invited to the UN General Assembly in 1974, Arafat, dressed in army fatigues, made it clear that if the olive branch he was holding in one hand was not reciprocated, his people would have no alternative but to use violence to attain Palestinian rights.

If Arafat waved an olive branch in one hand, Abbas, dressed in a Western business suit, grasped it with both. However, this approach, which included signing the Oslo Accords and spearheading joint security coordination with Israel, has not paid off, leaving Abbas without a game-changing deal. Whether the absence of a breakthrough was due to overly high expectations on Abbas’s part or intransigence on the Israeli side, Palestinians have generally blamed Abbas for the negative outcome.

The failure of Arafat’s mixed resistance and negotiations strategy and Abbas’s negotiations-only strategy opened a window for hard-line Islamists to enact their strategy of resistance. That strategy appeared to achieve a measure of success when the Israeli Army relocated some 8,000 Jewish settlers from the Gaza Strip in 2005. But that success proved to be false, as the Strip has since suffered from a crippling siege and two wars with Israel that have left thousands of Palestinians dead and injured.

Abbas has also been blamed for allowing the elections that brought Hamas to power in 2006 and enabled the Islamic movement to take over Gaza, causing a major geographical and political split in the Palestinian national movement. The loss of Gaza under his watch will long be remembered as a negative, with many Palestinians arguing that had Arafat been alive he would have personally gone to Gaza to embolden his people and prevent Hamas from gaining a foothold.

Despite these failures, it is likely that Abbas will be remembered as a stubborn leader, as he has succeeded in standing up to the Israelis by claiming that they are no partner for peace. Over the last two years, he has no longer agreed to prop up the façade of a “peace process” and give in to the attraction of photo ops with Israelis in return for zero substantive negotiations after the cameras are gone. And yet such a stance has still not yielded results.

The Outsourcing of Palestinian Issues

The combined defeat of the strategies employed by Arafat, Abbas, and Hamas has spurred a slow shift in the Palestinian approach to resolving the conflict, from using traditional, inside channels to employing more creative, outside means. For example, Palestinians in the diaspora, who do not face anywhere near the daily pressures of those on the inside, are able to move freely and develop alliances toward the singular aim of supporting Palestinian national rights. As a result, they have taken on more of a leadership role.

Indeed, settlements and the right of return appear to have been outsourced to leadership outside the occupied territories. The Boycott, Divestments, and Sanctions (BDS) movement, which began in West Bank academic circles ten years ago, has gained momentum outside Palestine and has made some serious gains in recent years. Hundreds of churches, universities, and unions have signed on to the boycott of Israel and Israeli settlements, and tens of well-known artists have heeded the call and cancelled concerts in Israel. This has caused panic among Israeli officials and pro-Israeli Americans, who have come close to violating their cherished First Amendment to put a stop to the popular efforts. The majority of the leaders in the BDS campaign are also those who call for a one-state solution as the best way to preserve the right of return—a markedly different approach from that of the Ramallah leadership.

Another key issue—Jerusalem—has been transferred to Jordan due to a clause in Jordan’s peace agreement with Israel regarding the future of the city’s holy places. Amman has grown into this role over time as the Israelis have shut down any attempt by the Ramallah leadership to negotiate or even speak on behalf of Jerusalem, its holy places, and its people. Jordan’s withdrawal of its ambassador to Israel in November 2014 in protest of an upsurge in entry restrictions to Al Aqsa, Islam’s third holiest mosque, brought quick results, as the Israeli government eased the restrictions and agreed to honor the status quo.

Who or What Comes Next?

While Abbas has been saying for years that he does not plan to run in future elections, some of his actions in the spring and summer of 2015 reflect a leader holding on to power rather than one seeking to give it up. His attempts to stifle the resurgence of former Prime Minister Salam Fayyad and his firing of the PLO’s longtime secretary general, Yasir Abed Rabbo, have caused concern that Abbas is clinging to his chair. Yet it is inevitable that Abbas will step down due to his age and the public’s unhappiness with his policies.

It is unclear who might succeed him. Abbas’s four-year term expired in 2009, and the term of the Palestinian Legislative Council (PLC), in which pro-Hamas candidates won a decisive majority, ended a year later. The Palestinian Basic Law, a quasi constitution, states that in the absence of a president (through death, resignation, or for health reasons) the speaker of the PLC will occupy the post for a 60-day period during which presidential elections are to take place. Abdel Aziz Dweik, a supporter of Hamas chosen by the council to head its first general session, has not led the council for years. PLO officials say that Salim Zanoun, the speaker of the 500-member Palestine National Council, which is in part comprised of the 132 members of the PLC, should preside as Palestine is now a non-member state of the United Nations. With this shift in status, Palestinians argue that the Oslo Accords, which mandated the creation of the Palestinian Authority, have been superseded and therefore a higher body representing all Palestinians should now be the reference point.

What adds further complexity is the absence of a deputy or vice president. Without a declared vice president, no one is being groomed to be the second in line within the PLO executive committee or within the Fatah movement. This has led many to worry about a political free fall once Abbas exits the stage.

But the future leadership of Palestine is certainly not tied to any single individual. While the issue of Abbas’s succession is important, many prefer a more open mechanism in which the position would be filled via the ballot box, with anyone allowed to run for the office. With outside actors taking on more of a role in determining Palestine’s future, the person or entity to fill the power vacuum could hail from anywhere.

Because Israel only recognizes the byproducts of the Oslo Accords, the position of president is meant to be open only to those Palestinians living in the occupied territories. However, many argue that a more logical process would be to mobilize the larger PLO structure to create a kind of global leadership that can support and benefit the 12 million Palestinians around the world. Perhaps only through such a framework could the final push for Palestinian statehood and liberation be accomplished.