The Predicament of the Obama Administration and the Muslim Brotherhood 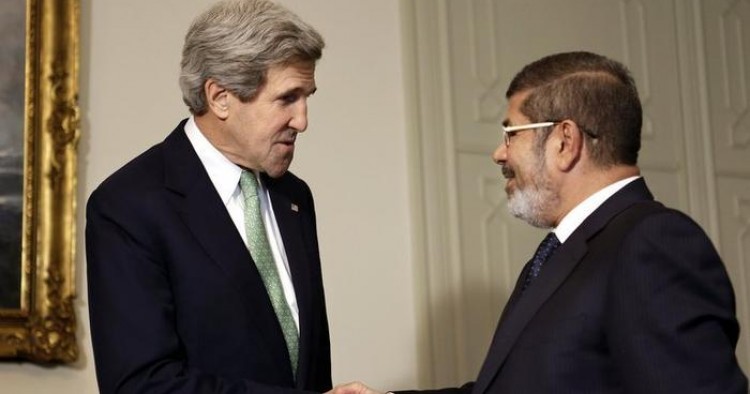 Al-Ahram columnist Ahmed al-Beri wrote on 23 March that “while the United States has often been supportive of President Mohamed Morsi’s regime, Egypt’s security and economic deterioration may be forcing it to reevaluate this support.”[1] Such thoughts are not exclusively al-Beri’s; they are dominating intellectual circles inside Egypt. The emergence of the Muslim Brotherhood as the new political warhorse in Egypt has complicated a delicate strategic relationship between Cairo and Washington.

For decades, the United States enjoyed mutually beneficial relations with Egypt through its understanding with Hosni Mubarak. With the election of a Muslim Brotherhood leader, Washington had to recognize the outcome of Egypt’s emerging democratic process despite any ill will that it may have harbored against the Brotherhood and its ideology. And so the Obama administration now finds itself in a bind. It needs to maintain the diplomatic status quo in Egypt–primarily due to its relations with Israel—while facing the demands of not only a new Islamist regime, but the voice of an entire populace as well.

Washington’s Relationship with the Muslim Brotherhood

Before the second round of Egypt’s presidential election, in a letter dated 13 June 2012, five members of Congress—Representatives Michele Bachmann (R-MN), Louie Gohmert (R-TX), Tom Rooney (R-FL), Trent Franks (R-AZ), and Lynn Westmoreland (R-GA)—requested an official investigation of the “Muslim Brotherhood penetration” of the U.S. Departments of Defense, Homeland Security, Justice, and State.[2] This action demonstrates real paranoia vis-à-vis the Islamists on the part of these conservative politicians, and it fueled rumors in some Washington circles of private agreements between the Obama administration and the Brotherhood.

A joint ceremony held by Egyptian and American officials on 3 February 2013 in Cairo to mark the delivery of four new F-16 aircraft to the Egyptian Air Force sparked more accusations of such special relations. The allegations came to dominate the Egyptian media and, to a lesser extent, the American press. "I think it's a blunder of the first proportion to send sophisticated weapons to a country that's allowed a mob to attack our embassy and to burn our flag," U.S. Senator Rand Paul (R-KY) said on the Senate floor.[3]

That same month Oklahoma Senator James Inhofe introduced legislation that would conditionally suspend the sale of F-16s to Egypt. He remarked, “For decades, the U.S. has had a good relationship with Egypt…[but] under Muslim Brotherhood President Morsi, this relationship has come to a halt. We need to continue to support the Egyptian military, which Morsi and the Muslim Brotherhood have currently distanced themselves from. Egypt’s military is our friend—Morsi is our enemy.”[4]

Rumors of special relations have been circulating in Egypt as well. In Cairo, Hossam Badrawi, the last chairman of Mubarak’s National Democratic Party, presented allegations during a television interview on the eve of the second anniversary of the 25 January revolution, claiming,  “While I was in the presidential palace in the last few days before 11 February 2011, I learned with certainty that the United States had played a prominent role in forcing former President Hosni Mubarak to step down.” He added, “There were arrangements in this regard between the Muslim Brotherhood and the American administration.”[5] Prominent political figures such as Mohammed Hassanein Heikal, Saad Eddin Ibrahim, and Mohamed ElBaradei have revealed similar sentiments in the past few weeks.

In addition, The Secret of the Temple: The Hidden Secrets of the Muslim Brotherhood, a book by ex-Brotherhood member and well-known lawyer Tharwat el-Kherbawy, became a bestseller in Egypt in the last six months. The tell-all exposes the doings of the Brotherhood, with the top “secret” being that the United States supports the Brotherhood because it can get almost anything out of it.

Yet despite these complaints and concerns on both sides, relations have in fact been strained at best since Morsi’s presidential win. Despite a relatively polite political façade, the Muslim Brotherhood and Washington do not see eye to eye on many issues. Indeed, Obama used his State of the Union speech in mid-February to question the Egyptian leadership’s commitment to democracy, saying, “We cannot presume to dictate the course of change in countries like Egypt, but we can—and will—insist on respect for the fundamental rights of all people.”[6] He echoed this appeal in a phone call to Morsi on 26 February.

Even though Morsi had revealed his plans to visit the United States by March 2013 in a January interview in Cairo with CNN’s Wolf Blitzer, the month came and went without such a visit. Video footage from 2010 of Morsi making remarks against the Jewish “occupiers of Palestine,” calling them “warmongers” and “the descendants of apes and pigs,” was making the rounds at the time, making it difficult for Obama to receive Morsi at the White House.

Instead, Kerry went to Cairo in March to meet with the opposition and government officials, including Morsi, though he declined to meet with the Muslim Brotherhood, which former Secretary of State Hillary Clinton had done regularly over the last two years. This perceived slight combined with Obama’s visit to the West Bank in the same month without a concurrent stop in Egypt has fostered more feelings of resentment in Brotherhood camps.

But practicalities are keeping the relationship afloat for now. Morsi’s recent forays into foreign policy show evidence of a leader willing to continue the lucrative American-Egyptian relationship forged by his predecessor. Egypt’s central role in brokering a ceasefire in Gaza in November 2012 demonstrates the Morsi regime’s willingness to work with Washington and Tel Aviv. Although the Brotherhood’s foundation does not endorse cooperation with Israel, Morsi was able to do the impossible—satisfy both American and Israeli administrations as well as temper domestic reactions. He upheld the treaties from previous regimes while still expressing support for Hamas and its cause. In turn, the American administration is engaging with Morsi as it did with Mubarak and the Egyptian military, and the trilateral relationship between Israel, the United States, and Egypt has not been largely interrupted by the transfer of power.

Furthermore, with a domestic economic crisis on the minds of voters, the Egyptian government has worked to maintain its current economic arrangement with the United States and Israel. Since 2004, as a part of the U.S.-Israel trade agreement, the Qualified Industrial Zones (QIZ) agreement has been upheld. The agreement allows for Egyptian exports to the United States to enter markets duty free as long as 10.5 percent of the exports are Israeli, a measure intended to increase the intensity of Israeli-Egyptian economic cooperation. The Morsi government has requested that the percentage of Israeli components be reduced to 8 percent, a figure required of Jordan under a similar agreement.

Of course, the U.S.-influenced $4.8 billion IMF deal may also still be in the works, and U.S. aid—though not as large an amount as one might think—continues to go to Egypt.

The Love-Hate Relationship: Here to Stay?

Hence, since the ousting of Mubarak, Washington has sought to maintain ties with Egypt similar to those forged under the prior regime. Yet President Morsi's track record during his first ten months in office and the increasing pressure he faces from ongoing protests and demands from his Muslim Brotherhood base and Salafi allies may mark the end of a bilateral relationship based solely on "aid for cooperation."

Indeed, a diplomatic entanglement regarding media censorship in Egypt arose in April, highlighting the differences between the ideologies of the Obama administration and the Muslim Brotherhood. On 1 April, State Department spokesperson Victoria Nuland released a statement criticizing the legal action taken against Egyptian comedian Bassem Youssef for insulting Islam and President Morsi, citing it as a matter of stifling freedom of expression.[7] The Freedom and Justice Party, or FJP—the political arm of the Muslim Brotherhood—responded by condemning Nuland’s remarks as “injudicious” and “a…blatant interference in Egypt’s internal affairs.”[8]

Obama and the Muslim Brotherhood are thus wading in murky, stagnating waters, with the values of the two administrations conflicting. The Brotherhood’s primary goal—to grab power—is clashing with Washington’s agenda and expectations.  Middle ground may be hard to come by as the Brotherhood solidifies its position and Morsi’s regime responds to pressure from extremists, both internal and external.

[5] “Mubarak Stepped Down Due to Public Pressure and Arrangement Between the Brotherhood and Washington,” Ana News, 12 February 2013.