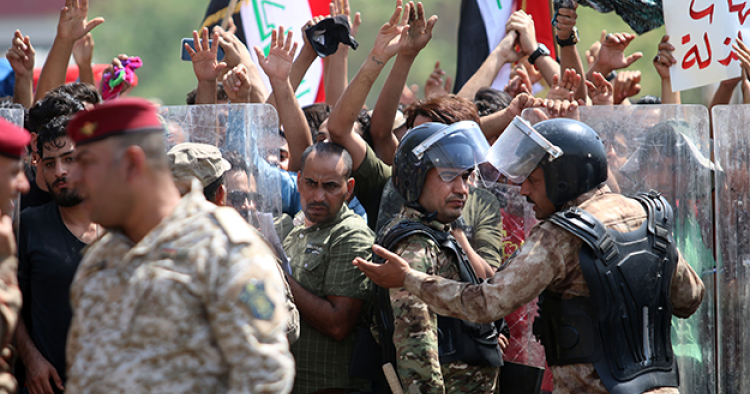 In this week's Monday Briefing, MEI experts Randa Slim, Marvin G. Weinbaum, and Charles Lister provide analysis on recent and upcoming events including the ongoing protests in Iraq, the Sharifs' return to Pakistan and their subsequent imprisonment, and pro-Assad forces' westward push in Syria.

Summer protests over water and electricity shortages, poor services, and corruption are not new in Iraq. Yet this year’s protests seem to have caught Iraqi officials by surprise. Military units were rushed to protest centers in southern Iraq to reign in demonstrators. Internet access was cut to prevent protesters from organizing online. Promises of billions of dollars in jobs and better service delivery were made.

While this protest movement might eventually get co-opted and pacified as has happened in the past, there are structural socioeconomic and environmental challenges facing Iraq that can no longer be contained with promises that go unfulfilled. In the last three years, the fight against ISIS pushed these challenges to the back burner, as Iraqis prioritized the threat posed by ISIS over other problems. With the ISIS fight “officially” winding down, and thousands of militias coming home to face a bleak economic future, the political elites in Baghdad, and particularly the Da’wa officials who have occupied the office of prime minister since 2005, are being called upon to answer for their dismal governance record. It is no coincidence that Haider al-Abadi and Nouri al-Maliki, the two Da’wa candidates, came in third and fifth in the last parliamentary elections.

The challenge facing Iraqis is that none of the other leading political parties and figures—be it the Shi‘a, Arab Sunnis, or Kurds—have a better governance record and are not corrupt. Muqtada al-Sadr, who jumped on the 2016 protest bandwagon, seems to be the least-targeted politician in this protest wave. This will increase his leverage in ongoing negotiations to form the next government. Abadi’s chances at returning to the post of prime minister have diminished. A scapegoat is needed to tamp down the protesters’ anger and frustration, and he will likely be the one. By capitalizing on Abadi’s political woes, Hadi al-Ameri, the Badr militia leader, is positioning himself to be Iraq’s next prime minister.

The return of the Sharifs
Marvin G. Weinbaum, Director for Afghanistan and Pakistan Studies  @mgweinbaum

The recent return from London and imprisonment of Nawaz Sharif along with his political heir and daughter Maryam Sharif has opened the Jul. 25 Pakistani election to new uncertainty and concern. Facing 10- and seven-year sentences for corruption and lying, the Sharifs have used their return to rally supporters and the occasion to increase their blustering attacks on the military and judiciary. The wholesale arrests of PML-N activists in connection with the return and growing climate of intimidation and coercion felt by the media and others has thrown into question whether the political parties can expect to compete on a level playing field. Meanwhile, the crackdown has seemingly energized Sharif’s loyalists and gained public sympathy for the Sharifs. Continuing agitationcoupled with a recent spike in terrorist attacks also raises the possibility that the election might be postponed, especially should the violence spread to major cities.

With the Sharifs assuming the mantle of defenders of democracy in challenging the actions of country’s military and judiciary, it becomes increasingly difficult to see how the establishment can continence a Sharif-influenced PML-N’s return to national office, even in a fragile coalition government. Nawaz Sharif has left little doubt that if given the opportunity there would be retribution.

All of this is taking place against the backdrop of serious economic concerns that will outlive the election season drama. Pakistan’s foreign currency reserves have plunged, the devaluation of the rupee continues, and the national debt has reached new heights. Whatever the election’s outcome, Pakistan seems poised for a period of serious political and economic instability.

Following its strategic victory in Syria’s southern Daraa governorate, the pro-Assad alliance is now on the march, having launched a new military offensive to the west in Quneitra, along the border with Israel-controlled areas in the Golan Heights. This conquest, conducted without protest from the international community, takes place as Israel, Jordan, and the U.S. have expressed hope that Russia has the will and capacity to, at most, remove Iran from Syria, or at minimum, force it far away from Syria’s southern borders. Either scenario, they hope, would better ensure stability, but neither is realistic.

Since pro-regime forces fired their first rounds in Daraa on Jun. 18, militias trained, funded, and in many cases coordinated by Iran have played a leading role in securing Assad’s advance—many having embedded within Syria’s armed forces. Multiple tit-for-tat military incidents have occurred between Israel and pro-regime forces along the Golan, and Israel has shot down three pro-regime drones flying toward Israeli territory. One such drone, downed on Jul. 12, was not Iranian, but Russian. Concurrently, Israel has also launched multiple airstrikes on Iran-linked targets elsewhere in Syria, reaching as far east as the Iraqi border in mid-June, when an IRGC facility was destroyed, killing more than 50 militiamen.

Seven years in, there is indeed little appetite within the international community to tackle the continued challenges posed by the crisis in Syria. But ceding the issue to a country whose recent track record presents it not as an ally but as a hostile adversary, looks worryingly like capitulation driven by short-term constraints at the expense of long-term interests.