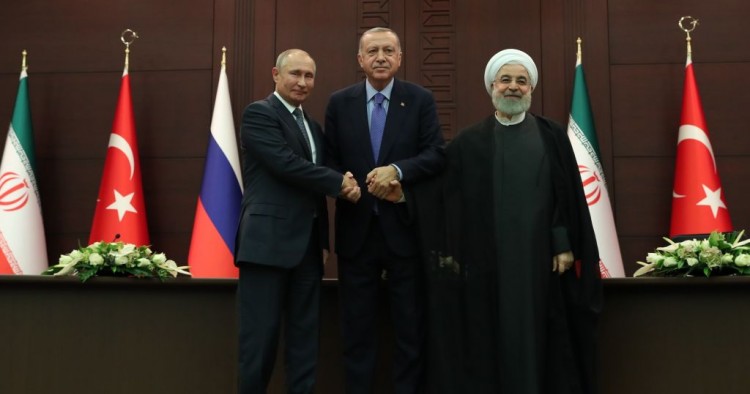 At a trilateral summit in Ankara earlier this week, President Recep Tayyip Erdogan sat back and ate treats as Iranian President Hassan Rouhani told the world that efforts to topple the Assad regime have failed. The scene was a stark reminder of how far Turkey’s Syria policy has shifted.

After the conflict in Syria broke out in 2011, Turkey’s number one priority was to topple the Assad regime. Ankara quickly became the most active outside supporter of the opposition, providing an organizational base, financial help, and weapons. Early on in the conflict, Turkey pushed for a safe zone inside Syria along the Turkish border to secure a base for the opposition. But Ankara’s priorities in Syria shifted as President Erdogan’s efforts to consolidate his power at home hit a wall. The rise of the pro-Kurdish Peoples’ Democratic Party (HDP) denied Erdogan’s Justice and Development Party (AKP) a majority in parliament in the 2015 elections, prompting Erdogan to change course. The government’s ceasefire with the Kurdistan Workers’ Party (PKK) broke down after the elections, Erdogan struck an alliance with the country’s nationalists, and the government embarked on a heavy-handed militaristic response to the Kurdish question. The changes in Erdogan’s Kurdish policy at home altered his calculations in Syria as well. The Assad regime was no longer enemy number one. The People’s Protection Units (YPG), the Syrian Kurdish militia that had become the U.S. boots on the ground in the fight against ISIS, took its place instead. Turkey launched two military incursions and promoted a safe zone cutting across YPG-controlled territory in an effort to prevent the Kurds from establishing a contiguous autonomous region in northern Syria.

The latest shift in Erdogan’s Syria policy came as a result of the growing nationalist backlash against the 3.6 million Syrian refugees Turkey is hosting. As the country’s economic problems have grown, so too has the anti-refugee sentiment. The most recent local elections were an indication of the level of bitterness against the refugees among the Turkish public. Erdogan’s party lost almost all major cities and according to polls, the refugee issue played a key role, alongside the economic downturn, in the AKP’s loss. Thus, Erdogan’s priorities in Syria shifted again. Sending back the refugees is now his first priority. After the Ankara summit, he spoke at length about the need to establish a safe zone that would host two to three million refugees. Fighting the Kurds is now only secondary to the urgent need to address the refugee issue, and toppling the regime seems to have been pushed off the list altogether. Erdogan is under pressure from both the opposition and people in his own party to normalize ties with Bashar al-Assad. They think this would solve Turkey’s problems. Russia, Iran, and Assad agree. They have been taking measures to facilitate normalization between the two sides and prevent a Turkey-U.S. rapprochement in northeastern Syria.

In Ankara, Rouhani reiterated an idea that was floated by Russian President Vladimir Putin back in January. He proposed to re-enact the two-decade-old Adana Agreement between Syria and Turkey to resolve both sides' concerns and bring about an end to a bitter era. The agreement, which was signed between the two countries in 1998 after Turkey threatened war if Syria did not deport the PKK leader Abdullah Ocalan, states that Syria will not permit any activity on its territory that jeopardizes Turkey’s security. Rouhani’s proposal to re-enact the agreement offers an alternative to Turkish efforts to establish a safe zone in northern Syria in cooperation with the U.S. and points to Assad as the right address to solve Ankara’s problems. The Assad regime is also signaling to Ankara that it could become a partner in the fight against the YPG. In a surprising move, Syria’s foreign ministry labeled the Syrian Democratic Forces as “separatist terrorist militias” in a letter to the UN secretary-general a day before the summit in Ankara. Despite the gesture, Turkey’s number one worry — the need to send back the refugees — remains unaddressed.

All of this is happening just days before Erdogan is planning to meet with President Donald Trump on the sidelines of the UN General Assembly meetings in New York, where he will push Trump to jointly establish a safe zone. If he fails, Erdogan has warned that Turkey will act alone. That would be a mistake. Not only will that fail to solve Turkey’s problems, it will create a host of new ones as well.