Resolving the Lebanese-Israeli border dispute: What’s in it for Washington? 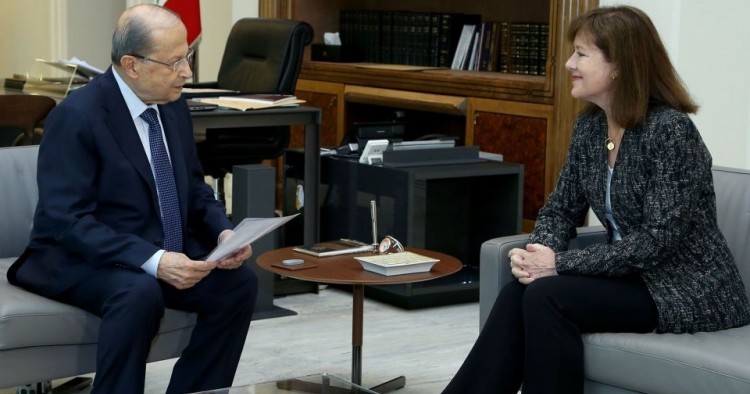 On Sept. 25, Lebanese President Michel Aoun told the UN General Assembly that Lebanon is prepared to welcome any country’s help in demarcating its land and maritime borders. He was referring to Lebanon’s decades-old border dispute with Israel, the resolution of which has become increasingly important as the country inches closer toward its first oil and gas drilling operations later this year.

Several significant offshore natural gas fields have been discovered in the eastern Mediterranean since 2009, and Lebanon finally agreed to a consortium of Russian, French, and Italian companies that will begin exploration in December off the coast north of Beirut. In 2020, drilling is set to begin in Block 9 — one of the two blocks containing disputed waters with Israel.

Since the early 1970s, the UN peacekeeping force in Lebanon (UNIFIL) has endeavored to ensure a quiet border between Lebanon and Israel, while also working to establish a defined and permanent land border. But after the discovery of potential offshore oil and gas reserves, the maritime border between Lebanon and Israel became a separate issue — one that does not fall under UNIFIL’s mandate.

Washington has tried to mediate between Lebanon and Israel to find a solution. Three different envoys tried to get both sides to agree to a framework for negotiations, with no success.

In 2012, Fredric Hof proposed dividing the 860 sq km (330 sq miles) of disputed waters, giving 500 sq km to Lebanon. This became known as the Hof Line, but was never accepted by either side.

Hof was then succeeded by Amos Hochstein until 2016, but progress was minimal as Lebanon went two and a half years without a government. Hochstein tried to reach a fair compromise for both sides, but to no avail.

The third envoy, David Satterfield, went back and forth for over a year and things appeared headed for the finish line before he handed over the file to the newly appointed assistant secretary for Near East affairs, David Schenker.

On his first trip to Beirut in early September, Schenker made it clear that he would like both sides to reach an agreement, but that he was not as patient as Satterfield, and pointed to what he says is a holdup by the Lebanese government on the framework for potential negotiations. According to one senior U.S. official in the State Department, it is Hezbollah that is now blocking the next step.

But Lebanese officials say it’s Israel that continues to impose conditions and renege on previously agreed to terms when a written framework is requested. They say that without having every scenario in writing, Israel will begin digging during the process of negotiations even if they hit a snag.

For its part, Lebanon does not want a timeframe or deadline for the talks and has been adamant they must be led by the U.N.

The Israelis have agreed to this, although behind closed doors U.N. and Lebanese officials have said they think Washington is the only actor able to convince the Israelis one way or another. For their part, Israeli officials have voiced their frustration with Lebanon’s reluctance to enter into negotiations without any guarantees.

Lebanon, according to a senior political source close to Parliament Speaker Nabih Berri, has put forward a counterproposal and is waiting for the U.S. to respond.

It would be in the US interest

Either way, it is crucial and in the interest of the U.S. to continue chipping away at this file. Washington has already expended significant political capital with Israel, as one senior Western diplomat said, to get them to agree to most of the terms Beirut has demanded. Just as Iran — via Hezbollah — has been pushing back against U.S. interests in Lebanon since the early 1980s, the U.S. will need to invest the time if it wants to reverse Iran’s gains.

Lebanon and Israel, both U.S. allies, have been technically at war since 1948. Since the end of their most recent clash in 2006, the de-facto border between the two has been one of the calmest in the region, although recent regional and international developments have jeopardized this. Another war between the two, which many analysts and officials believe is inevitable, will wreak havoc on both sides — and the U.S. will gain nothing.

Realistically, only the U.S. is capable of making Lebanon and Israel reach a deal on the border dispute, and it would come as a blow to Iran and Hezbollah to not be able to stop it. It would be in Lebanon’s interest as well, and the country’s top three leaders have all expressed a willingness to do so. Washington has an advantage over Iran on this file and is in a position to help Beirut resolve the issue.

The Lebanese president has repeatedly called on the U.S. to help in the dispute, as has Prime Minister Saad Hariri. Speaker Berri, who is the main point of contact for Lebanon’s position as he is close to Hezbollah, has also expressed optimism about the prospects for a deal. Lebanon’s president and prime minister want a deal, but Berri is the man who will ultimately greenlight negotiations or not.

Previously, the Lebanese leaders did not have a unified stance on the issue, but now they do, and Aoun presented it to the U.S. ambassador, Elizabeth Richard, in May, after Secretary of State Mike Pompeo visited Beirut.

Hezbollah’s secretary-general, Hasan Nasrallah, spoke out against Satterfield’s work, accusing him of mediating to target Hezbollah’s arsenal of missiles. Even with the gains Hezbollah has made in Lebanon and its strength inside and outside the government, Nasrallah has conceded that he cannot stop the negotiations.

The deal is something that Aoun wants to happen as he looks to the future — being the president who secured an agreement that enabled Lebanon to become an oil-producing country would help him to establish his legacy.

And in the event that a deal is reached, President Donald Trump, who is big on striking deals, will have one more to add to his CV — one that he can brag about for years as none of predecessors was able to pull it off.

It won’t solve everything, but there are upsides

This is not to say that normalizing relations between Beirut and Tel Aviv should and would be discussed. That is another matter entirely, and one that will not happen before Israel completely withdraws from Lebanese territory and Hezbollah disarms as is stipulated by international resolutions, which is unlikely before a new U.S.-Iran deal is struck.

In facilitating an agreement between Lebanon and Israel under U.N. auspices, the U.S. will also be able to further energy cooperation in the eastern Mediterranean. There are growing signs of energy resources in the Mediterranean, especially off the coasts of Lebanon, Cyprus, and Israel. The latter two countries have already reached an agreement on their maritime borders. Adding Lebanon will increase cooperation and stability between the three and push back against the need for Russian involvement in the region’s energy sector. Turkey, meanwhile, cannot prevent an agreement if the U.S. pushes ahead with mediation between Lebanon and Israel.

Moreover, at a time when Iran is disrupting international maritime shipping routes, reducing tensions in regional waters would be in the interests of the U.S. and its allies.

In early 2019, eastern Mediterranean countries began discussions on creating a regional gas market, a move that would help to tie the region together and could ultimately reduce Russia’s leverage over Europe when it comes to energy supplies. In addition, American oil companies, such as Noble Energy, a primary explorer in Israel, could benefit from an Israel-Lebanon deal, as the U.S. would be one of the few countries whose firms would be trusted by both sides.

Hezbollah remains one of the biggest thorns in the side of the U.S. Increasing its military aid to the Lebanese Army and humanitarian aid to other sectors of Lebanon, Washington has made gains against the group since 2006, but it comes after a long absence. Continuing this aid but increasing diplomacy in areas like the maritime and land borders will only prove beneficial to the U.S. government’s interests in the region.

It will require fair and objective mediation, but the U.S. knows very well what both sides want in any future negotiations. It will also be a step forward toward reducing tensions between Lebanon and Israel, even if it won’t resolve the challenge presented by Hezbollah and its arsenal. Should a deal be struck, it would set a precedent for successful negotiations between the two sides and help to build confidence — both things that Hezbollah is loath to see happen. Moreover, given the benefits from future oil and gas exploration that a deal would likely unlock for Lebanon’s ailing economy, any Hezbollah move to jeopardize this would undoubtedly be met with fierce opposition from the Lebanese public.

But the U.S. must be careful not to try to persuade Lebanon to give up its rights in exchange for eased sanctions or economic aid, similar to the offer it made to the Palestinians in the economic part of the so-called deal of the century. Rightly or wrongly, Lebanese officials will not agree to such a move and this would draw another country in the region even further away from the U.S. and closer to Iran or even Russia.

Joseph Haboush is a Non-resident Scholar at MEI, the Lebanon and Online Desk Editor at The Daily Star, and a Middle East reporter for The Telegraph. The views expressed in this article are his own.