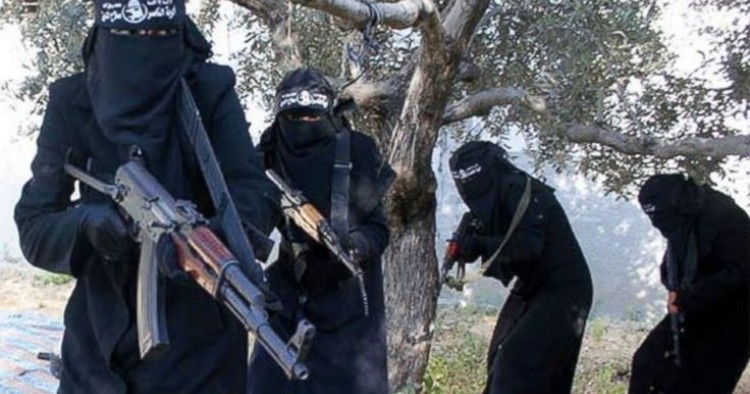 The Islamic State (ISIS) claims that women are just as important as are men in waging jihad. Accordingly, ISIS has issued worldwide appeals to women to join the war in Syria and Iraq. These appeals have been moderately successful, as some women have heeded the call—including women from Indonesia.

Drawing upon the work of Mia Bloom, this essay challenges the assumption that women are seldom involved, or are at any rate marginal actors in violent extremist groups. The author argues that women are strategic actors, and not hapless victims or bystanders in terrorist movements and counter-terrorism efforts in Indonesia.

The Study of Women and Terrorism

Mia Bloom challenges the assumption that “women’s participation in violent extremist groups is an unusual phenomenon.” Bloom argues that females have been as important and as active as males in terrorist activities. According to Bloom, between 1985 and 2010, female bombers were involved in more than 257 suicide attacks, i.e. about a quarter of all terrorist operations worldwide.[1] Nevertheless, the literature on women in terrorist and violent extremist groups is relatively sparse. As Rafiq and Malik note, “the minutiae of the organisations that encourage female membership—as well as the stories of the women that join them—are understudied.”[2] This knowledge gap is partly attributable to the difficulties researchers face in gaining access to women who are involved in violent extremist movements and to female fighters in particular. In order to interview female respondents, researchers must obtain approval from their ‘protectors’ (i.e., husbands or male relatives). In the case of Indonesia, obtaining such access is difficult, as the position of women is subordinate to that of men, reflecting the country’s patriarchal societal structure and traditional interpretation of Islamic texts.[3]

Women play a significant role in terrorist groups in wars and conflict zones, both at the strategic and tactical levels. Not only do they “supply” brides for men in jihadists groups, they also proudly take a position in maintaining the movements' secrecy. In addition, they provide food and logistical supplies for fighters. And these women routinely undergo physical training in order to prepare for the eventuality that they might have to defend their territory against the enemy.

In Indonesia, female jihadists have played various roles. During the conflicts in Maluku and Poso from 1998 to 2002, for example, they provided ammunition, homemade explosives, and logistical supplies for jihadists and local fighters. After the conflict, they played more of a strategic role—engaging in religious proselytizing, education, recruitment and charitable activities.

The Women of ISIS

The Islamic State’s ideological argument regarding the position of women in jihad differs from that of Al-Qaeda (AQ). Ayman Az-Zawahiri, AQ’s spiritual leader, has argued that women are not allowed to be part of the tactical team or to be present on the battlefield, unless they are involved in defending their rights and territory.[4] In contrast, ISIS allows women to participate in offensive combat operations as well as in defensive activities.

The composition and range of activities reportedly conducted by the Al Khansaa Brigade demonstrates the expansive roles that some female ISIS members occupy. Formed in early 2014, the Al Khansaa Brigade is an all-women religious enforcement unit or “moral police” that operates in Raqqa and Mosul. Comprised of women mostly from the West, the Brigade plays a crucial role in providing local security.[5] The Brigade practices and seeks to preserve the strict regulations imposed by the ISIS. Any woman who fails to do so may be subject to punishment.[6] The Al Khansaa Brigade serves as a model for ISIS female fighters all over the world, including female fighters from Southeast Asia.

Indonesian Women of the Islamic State

Southeast Asian women could play a strategic role in uniting and attracting foreign fighters from all over the world—and some might already be doing so. Sidney Jones, director of the Institute for Policy Analysis of Conflict (IPAC), argues that widows of “martyred” Indonesian and Malaysian fighters constitute one of several “cross-border connections” between ISIS and Southeast Asia that ought to raise concern.[7] Referring to these widows, Jones notes that,

their husbands’ martyrdom increases their social status and may lead to quick remarriage, but perhaps outside Indonesian circles. If these women begin marrying fighters of other nationalities, the transnational linkages will only deepen, causing more headaches for law enforcement in the future. The potential terrorists in Southeast Asia may not just be nationals of ASEAN countries but Uzbeks, Chechens or North Africans, married to Indonesian women.[8]

Some families have migrated (hijrah) from Indonesia to Syria as a result of female members’ succumbing to the influence of Islamic State through their participation in religious circle studies. Though assured that their husbands and children were going to join the migration to Syria, many of them failed to enter Syria and were deported by Turkish authorities.[10] A director of Batam’s One-Stop Integrated Service (PTSP) in the Riau Islands joined ISIS, initially influenced by his wife, who had joined the group earlier.[11] Six Indonesian women suspected of being affiliated with ISIS were arrested by Turkish authorities on November 14, 2015 as they attempted to enter Syria.[12]

The wives of Indonesian ISIS leaders such as Bahrun Naim[13]—Rafiqa Hanum and Hurin Thin Lestari—promoted the beauty of living in Syria through social media. They posted pictures and other activities of women and wives of ISIS jihadists. Some women who follow these accounts have responded positively to these depictions of living conditions. Hanum and Lestari thus form part of the backbone of Naim’s ISIS Southeast Asian leadership, attracting other females and males to migrate to Syria. Huaey and Witmer found “a woman publicly identified within ISIS literature as a source of assistance for females wanting to migrate to Syria,” using social and other online media.[14]

Unlike women of Al-Qaeda, women of the Islamic State are encouraged to actively participate in weapons training. The Eastern Indonesian Mujahidin commanded by Santoso (aka Abu Mus’ab al Zarqawy al Indonesia)—one of the Indonesian terrorist organizations affiliated to the Islamic State—has been fighting against the Indonesian police since early 2015. Some of Santoso’s soldiers are women. Not only have they undergone weapons training, but they have also been involved directly in the fight against the police.

What, then, could explain the appeal of radical groups to women, including female Indonesians, and their willingness to wage jihad? As Marcoes observes, “analyses of the role of women in radical movements have tended to be simplistic and have deprived women of their agency, painting them as victims of stronger or charismatic men.”[15] In the Indonesian context, there are several possible explanations for why some women choose to engage in jihad, including their gravitation to the idea of a caliphate as a matter of religious duty, as an answer to social injustice and inequality, or as a means of attaining a status equal to that of their male counterparts.[16]

Women are a crucial factor in the development and rise of the Islamic State in Indonesia and beyond. At the same time, however, women have also contributed to counterterrorism and counter radicalism efforts. It is important to mention that some former terrorists—influenced by mothers and/or wives who have supported their rehabilitation—have been transformed into peaceful, non-violent activists. Asep Jaja, who is currently serving a life sentence in Porong prison since his arrest in 2005 in Ambon, appears to have embarked on such a path. Asep claims that his wife and parents have been instrumental in supporting efforts to gain his release. Asep’s mother said that she hopes the government will commute his sentence, as he has cooperated fully with the police. The woman sobbed as she described her son’s radicalization, involvement in violent activities and prospects for rehabilitation and release.[17]

Yet, many Islamic State detainees refuse assistance from the government, which they consider to be Anshorut Thoghut (helpers of authoritarian rulers). Their wives, parents and their own ISIS-affiliated community support each other in continuing the fight. Raising children to be strong jihadists as well as other physical and education activism become the role of ISIS-affiliated in Indonesia. Mia Bloom has argued that “most often, women’s primary contribution has been to perpetuate the conflict by giving birth to many fighters and raising them in a revolutionary environment.”[18]  Bloom’s argument is in line with the path that many of the women of ISIS in Indonesia have taken. However, some have gone much further, training for possible direct participation in operations. Bloom has also argued that “women are now taking a leading role in conflicts by becoming suicide bombers-using their bodies as human detonators for the explosive material strapped around their waists.”[19] Although Indonesian women jihadists have not (yet) conducted suicide bombings in Indonesia and Syria, their strong endorsement of and support for those engaged in such operations is nonetheless crucial to Indonesian jihad movements.

Women are neither hapless victims nor bit players in terrorist movements or counterterrorism efforts in Indonesia. On the contrary, they are valued and valuable strategic actors. They are involved in encouraging fighters (mostly male) to amaliyat (operations) in Syria and Poso, Central Sulawesi. They actively participate in social media and religious circles. They also encourage other women and their families to strengthen their commitment to jihad though social media. In addition, some women participate in terrorist training, especially those from ISIS-affiliated groups, which allow women to engage in combat. Most women serve in support or logistical capacities. And many have to work independently to provide funds if their husbands are imprisoned.

To be sure, some women do play important roles in counterterrorism and counter radicalization efforts. In fact, some jihadists have been transformed, renouncing their violent ideology and turning to non-violent activism instead, in part due to the influence and support of their wives and mothers.

Yet, one thing above all is abundantly clear: The multiple roles that women are playing, and could play in supporting and committing jihadist violence as well as countering it are underestimated and understudied. The emergence of ISIS and the apparent new boost it has given to jihadism in Indonesia and elsewhere in Southeast Asia demands greater attention and deeper analysis.

[13] Bahrun Naim is one of three main leaders of the Islamic State from Indonesia in Syria, establishing Katiba Nusantara, the Islamic State of Southeast Asia in Syria. The other two are Bahrumshah aka Abu Muhammad al Indonesy and Abu Jandal aka Salim Mubarak At Tamimy. The Indonesian Head of Police had initially claimed that Bahrun Naim was the man behind the attack in Jakarta that killed seven and injured about 23 people on January 14, 2016. However, the police subsequently discovered that the operation had been planned from Indonesia and involved Aman Abdurrahman, a prisoner at Nusakambangan super maximum facility.

[17] Researcher of Centre for the Middle East and Global Peace Studies Discussion with Asep’s mother at Porong prison, December 2015.