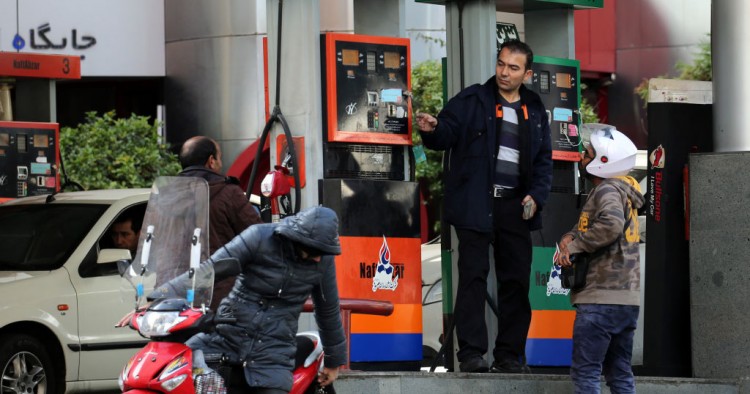 My recent piece argued why Iran’s gasoline subsidies, and more broadly speaking its energy policy in recent decades, have been highly inequitable, ineffective, and inefficient. Iran is not alone in this respect, however. Highly subsidized energy prices that disproportionately benefit wealthier households have been the hallmark of energy rationing and pricing policies in many other MENA and developing countries.

There is no discussion that faced with rapidly deteriorating public finances, Iranian policymakers had no choice but to reduce the gasoline subsidies through a combination of rationing and price hikes. However, there is much to discuss about the alternative policies available to policymakers and the way in which the subsidy reductions were implemented.

As far as the implementation is concerned, the recent rationing and price hikes were carried out in the most secretive manner possible. President Hassan Rouhani claims that even he did not know when the new pricing and rationing schemes would start and that he requested not to be informed of the timing, fully delegating it to the Ministry of Interior. The reason for this extraordinary level of secrecy, the president and others in the government claim, was to prevent runs on gas stations, sudden increases in fuel smuggling, and stockpiling of gasoline by households. The public, however, has instead perceived this secrecy as mockery and trickery, especially because three days before the rationing began, Iran’s Ministry of Petroleum denied that there would be any rationing or price changes in the last few months of Iranian calendar year 1398 (running through mid-March 2020).

The recent rationing and price hikes should have been preceded by a long-term information and education campaign aimed at convincing the public that such a policy is beneficial for the economy as a whole, and especially for lower-income groups. Moreover, in a gesture to build trust and social capital, any planned cash transfers to beneficiaries should have been implemented before or on the day the policy went into effect, and not after the start of the protests. At the very least, such measures would have reduced the public’s anxiety and resistance while increasing the Rouhani government’s social capital, which is non-existent at the moment.

There were other options too. The government had access to alternative policies that have been proposed by energy experts and economists in the past few years, which would have resulted in more equitable, effective, and efficient outcomes in the long run. One such policy was a “cap-and-trade” scheme. In this arrangement, the government identifies a socially efficient cap for gasoline consumption on an annual basis, keeping in mind the cost of the negative externalities of pollution. Then, the government allocates equal rations to every Iranian resident regardless of whether or not they own a car or motorcycle. This rationing is done at a subsidized price equivalent to the cost of production and distribution, which is currently around 20,000 rials per liter (67 cents per gallon), therefore putting no extra pressure on government finances. Individuals or households are then allowed to trade their rations at a price designated by supply and demand forces in the gasoline market.

Basic economics teaches us that in the scheme laid out above, gasoline prices in the market will be equal or more than the regional average, which is now around 53,000 rials per liter ($1.80 per gallon). Also, richer households that have greater demand for gasoline will become net buyers from the poorer segment of the population who have little or no demand for it.

It is immediately clear that this proposal is more equitable because subsidized rations are allocated to all household and not only to those who own cars or motorcycles. Let’s not forget that 50 percent of Iran’s poorest do not have any private means of transportation, but under this policy they would still be allocated shares of subsidized gasoline that they could sell at much higher prices in the market to higher income groups. Therefore, this proposal will lead to a net transfer of wealth from richer segments of society — the net buyers of gasoline — to the poorer segments of society — the net sellers — without any government involvement or taxation policy. Under this policy, people are the owners of gasoline, a major component of Iran’s national wealth, and again basic economics teaches us that people are almost always better at deciding what to do with their wealth than the government.

This proposal is also more effective because it does not negatively impact the government’s finances and therefore does not contribute to inflation. In the current policy the government has obligated itself to transfer the income earned from reduced subsidies to 18 million households as direct cash transfers. This will lead to an increase in the money supply and therefore more inflation in the economy, putting pressure on the rial to slide against U.S. dollar, eventually lowering the price of gasoline in U.S. dollar terms, and increasing gasoline subsidies in the near future to the previously higher levels. In this alternative proposal, the government is not involved in any direct cash transfer schemes as richer households directly purchase gasoline shares from poorer households in an online market using the existing money supply. As a result, this proposal would not put any extra pressure on government finances and will not directly contribute to inflation induced by larger budget deficits. Moreover, supply and demand forces in the market will determine the price of gasoline, which will always be equal or more than the regional average. Consequently, any time the rial slides against the U.S. dollar, the price of gasoline will adjust to reflect that loss of value in rial, therefore, preventing the recurrence of any implicit or explicit subsidies.

This proposal is also more efficient. In this policy, a socially desirable quantity cap — which also takes into account the negative externality of pollution caused by gasoline consumption — is determined and then divided equally between individuals and households. As a result, no gasoline is produced and distributed beyond the cap amount, pushing smuggling toward zero as there is little or no extra gasoline left in the market to smuggle. Moreover, as mentioned above, in this scheme the gasoline prices will be equal to or more than the neighboring countries, consequently reducing the profit and motive of smuggling to zero. Finally, any cap-and-trade mechanism leads to more efficient and socially desirable outcomes than direct taxation or allocating non-tradeable rations.

From an implementation point of view, this proposal is technologically feasible and cost-efficient because all Iranian have a smart national ID cards with embedded chips. Also, access to mobile phones, ATMs, and ATM cards is basically universal and every gas pump in Iran is equipped with the technology to read smart IDs.

Iranians are already paying bills, transferring money to peers, and performing many other financial activities using ATMs, mobile phones, or the internet. In a similar manner, rations of gasoline could be linked to smart national ID cards or ATM cards, which could then be traded in real time using Iran’s current IT infrastructure. All that needs to be done is to create a digital market where shares of gasoline could be traded at the pump. The market will take care of the rest, just like it does in any other cap-and-trade mechanism around the world. The long-term benefits of designing and operationalizing such a market for the Iranian economy and households would far outweigh the short-term costs and planning efforts.

A scheme similar to the one described above has been proposed by a group of experts from a think tank housed in Iran’s top university — from which the likes of the late Maryam Mirzakhani and many other top Iranian scientists have graduated: Sharif University of Technology’s Governance and Policy Think Tank (GPTT). In an effort to educate the public and raise awareness and transparency, GPTT has also created an online platform where people can enter their household information to calculate their financial gain if such a scheme were implemented.

At the end, the main question remains: why did Iranian policymakers not choose to implement a more equitable, effective, and efficient energy policy, something similar to the one described above? Again, Iran is not alone in this respect and the same question applies to many other MENA and developing economies. While the answer is as complex as the political economic dynamics of each country, one thing is for sure: the majority of MENA policymakers prefer immediate and smaller short-term gains that don’t require major restructuring or significant changes in the status quo to long-term larger gains that require some degree of restructuring and change. Perhaps, they have taken Keynes’ lesson too seriously that “in the long run we are all dead.”