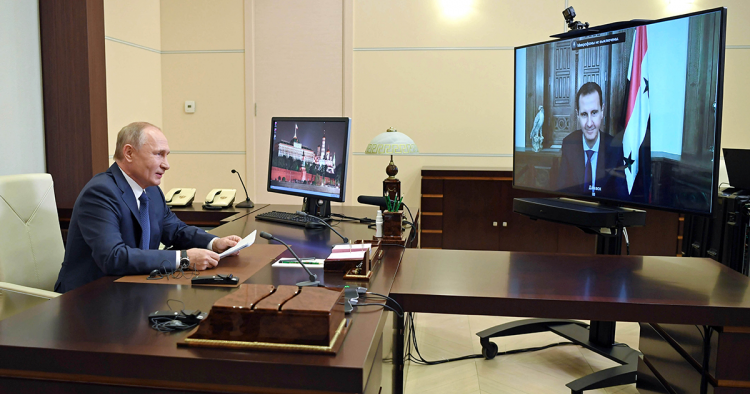 Russia’s key foreign policy dilemma is the tension between its aspirations of retaining its Soviet-era geopolitical clout and its lack of ideological and economic tools to achieve that goal. Among other things, this has implications for the Kremlin’s behavior toward its allies. Russia’s leadership chooses to either turn a blind eye to its partners’ activities or tries to restrain them in such an aggressive fashion that they start looking for alternatives. This problem is only compounded as Russia invests ever more resources into conflicts that tend to become frozen and produce quasi-states. Entities in the post-Soviet space such as Transnistria, Abkhazia, South Ossetia, or Donbass are all cases in point. This, in turn, is expensive, risky, and complicated for Moscow since supporting such quasi-states requires additional financial resources and the ability to organize their governance in a non-centralized fashion.

From a strategic standpoint, Russia’s campaign in Syria also seems like an open-ended story that bears some resemblance to the situation in Ukraine. It is a little-known but notable fact that once the Kremlin decided to intervene in Syria following events in Ukraine, diplomats outlined the eventuality of a “frozen conflict” as one of the scenarios to prepare for.

There are indeed some similarities. Firstly, in both cases there is an issue over the sequencing of conditions laid down in the peace agreements and protocols, rendering them unworkable. Secondly, Moscow frames itself not as a participant in either of the two conflicts, but rather as a moderator. Thirdly, and flowing from the previous point, Russia uses the threat of conflict escalation as leverage in negotiations with third parties. A notable example of this is Russia’s recent large-scale military exercises on the Ukrainian border, which Russian troops had previously crossed to assist separatist rebels in Donbass. In so doing, Moscow demonstrates that it can turn a low-intensity conflict into a full-scale war whenever it wants. This gives rise to the perception that Russia’s actions were just a ruse to make Washington more pliable in negotiations on topics including strategic stability and regional crises.

Being trapped in a never-ending state between war and peace is a difficult burden for any quasi-state in the post-Soviet space. And yet there is no escape from it without some drastic, and thus dangerous, change. The Minsk agreements on Donbass have effectively become a declaration of intentions with little prospect of actually being implemented due to irreconcilable positions over the issue of elections in Donbass and access for the Ukrainians to the border with Russia. And while the status quo has a negative impact on local citizens in quasi-states by perpetuating uncertainty, the Kremlin has managed to adapt to it. It is used to circumstances where it deploys a combination of selectively applying force, intimidating, and coaxing opponents. The Russian government uses these same methods to head off issues at home, such as dissent from the opposition or the difficulties of managing republics in the North Caucasus.

These similarities in Russia’s methods — at home and abroad — are not accidental. The Kremlin lacks the ability to impose its foreign policy blueprint on the West and can only leverage its power to stir up trouble in unstable regions. But neither can Russia give up on its global ambitions in favor of dealing with quotidian matters at home. So much has been invested into hyping Russia as a fighter against the unipolar order and global injustices that walking it back is no longer a viable option, especially given the central position of the security establishment in the country’s decision-making.

On Syria, there are many Russian diplomats who do not see the situation in Damascus in simple black and white terms, as is expected from loyal officials. Moscow is still struggling to bolster Bashar al-Assad’s legitimacy in the eyes of his opponents. The fall 2020 refugee conference, which Moscow billed as an authentically Syrian initiative to show the regime’s ability to act with decorum, failed miserably. Vladimir Putin’s attempt to blackmail Europe — by linking the prospect of stemming the flow of refugees to the EU’s agreement to invest in Syrian infrastructure — only amplified the Europeans’ distrust of the Kremlin, especially against the backdrop of noisy botched Russian military intelligence operations. To top it all off, the seemingly permanent energy and food crises in Syria refute claims made by Moscow about the country’s economic recovery or the return of major investors.

Yet even this ostensible picture still provides a silver lining for Moscow. Russian officials are euphoric that the key actors in the Middle East, tired of the Syrian war and preoccupied by their own competition, not only do not confront Moscow but even actively seek it out and allow it to intervene in existing regional crises. Suggestions that the Arab League might be prepared to welcome Assad’s Syria back into the fold bolster Moscow’s self-confidence, irrespective of the actual reasons for doing so (purportedly to contain Iran).

This recognition of Russia’s status, though often overhyped in the media, appears more important to the Kremlin than real benchmarks of influence such as economic contracts or influence with regional elites. Hence the Russian government’s reluctance to seek significant compromises on the Syrian dossier. Moscow used the so-called de-escalation areas in Syria as a means to suppress armed rebels, while also creating “puppet opposition” formations to create the appearance of a real political process. Russia also brings up the importance of international law and the U.N. as a façade to replace the transitional government with the Constitutional Committee and block opportunities to deliver aid to the country by circumventing Damascus. This convoluted dynamic creates some bizarre moments when it comes to Moscow-Damascus relations. Reflecting on political reform in Syria, Russian diplomats speak with a straight face about the Syrian regime’s displeasure at Moscow’s vote at the U.N. Security Council to support the creation of a transitional government. The same diplomats also bring up the point that some amendments to the constitution discussed in Geneva effectively entail the creation of a new constitution.

Setting aside baseless speculation about the launch of the Syrian Transitional Military Council and other such fantasy scenarios, the current situation imposes limits on substantive changes in Syria. Neither Assad nor Moscow has even attempted to add a veneer of legitimacy to the upcoming presidential election. True, even if Russia and Assad had tried to create the appearance of real electoral competition — for example, by getting the former 5th Corps fighters more involved in the process — this would not have enhanced Assad’s legitimacy in the eyes of the West. Yet it would have provided more sophisticated propaganda and improved conduct by the Syrian regime. This could have been valuable for Russia by creating an opportunity for engagement with international players within such largely “outworn” forums as the Astana Process, which Moscow keeps alive to gain experience building informal coalitions with MENA states.

Viewed from this angle, the prospect of an open-ended conflict in Syria appears to Moscow as less of a burden and more of an opportunity. It is enough to look at Russia’s domestic situation to understand Moscow’s real attitude to any strong political opposition. Meanwhile, Russia is not expecting any reconciliation with the West given the current sorry state of relations, a situation that has only gotten worse given recent political changes. As for dialogue between Russia and the Gulf states, Moscow welcomes the desire of these players to seek options to contain Iran and Turkey. In sum, paradoxical though it may sound, Moscow lacks incentives to bring the Syrian conflict to a close. This makes it even more difficult to answer the question of who really benefits from the current stalemate.

Anton Mardasov is a non-resident scholar with MEI's Syria Program and a non-resident military affairs expert at the Russian International Affairs Council (RIAC) focusing on Syria, Iraq, and extremist organizations. The views expressed in this piece are his own.