Russia’s efforts to expand the Astana process in Syria 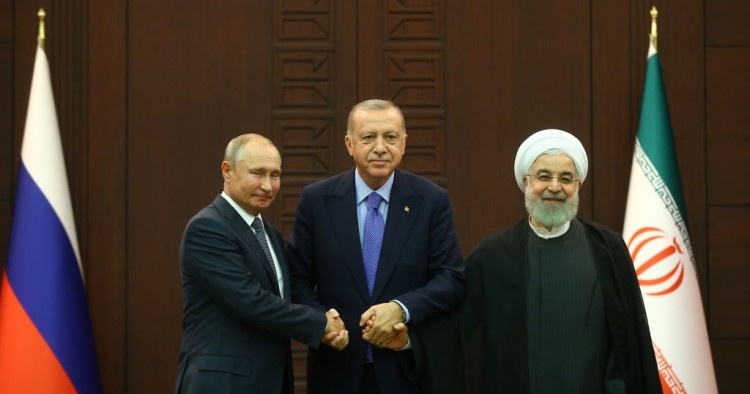 On Sept. 16, the presidents of Russia, Iran, and Turkey met in Ankara to discuss the resolution of the Syrian civil war. In all three countries, the Ankara summit was hailed as a major success, as negotiations on the formation of a Syrian constitutional committee concluded and progress was made toward resolving other outstanding challenges, such as the future of northeastern Syria and the ongoing struggle for Idlib.

In spite of these apparently successful negotiations, Russia remains apprehensive about the growing scope of its disagreements with Iran and Turkey on Syria. Russia’s recent efforts to dilute Iran’s hegemony over the Syrian military through security sector reform and Iran’s unwillingness to assist Syrian President Bashar al-Assad’s efforts to seize control of Idlib have intensified discord between Moscow and Tehran. Russia is also frustrated with Turkey’s inability to disarm Hayat Tahrir al-Sham (HTS) militias in Idlib and refusal to hand back full control of Afrin to Assad’s government.

To limit the impact of these disagreements and consolidate Russia’s influence over the Syrian peace process, Moscow is making a concerted outreach to Arab countries to establish areas of common ground. These diplomatic overtures have received enthusiastic support from Iran and Turkey, as the regional standing of both countries benefits from acting as guarantors of a more expansive peace process. In a notable success for this policy, Lebanon and Iraq attended the Astana talks as observer states for the first time on Aug. 1-2. Russian Foreign Ministry spokeswoman Maria Zakharova welcomed this development as a step that could increase Syria’s regional trade links. Marianna Belenkaya, a prominent Moscow-based journalist, stated that the inclusion of all of Syria’s neighbors, except Israel, in the Astana peace talks would increase the international prestige of the negotiations.

In order to secure Lebanon’s attendance at the Astana peace talks, the Russian president’s special envoy to Syria, Alexander Lavrentiev, discussed the issue of refugee repatriation with Lebanese President Michel Aoun and Prime Minister Saad Hariri on June 20. These meetings resulted in a proposal to create a Russia-Syria-Lebanon trilateral committee on refugee repatriation that would facilitate the return of displaced Syrians to undamaged areas of the country. As pro-Kremlin media outlets view the return of Syrian refugees as a benchmark for the success of Russia’s diplomatic involvement in Syria, taking a lead role on the refugee repatriation issue helps burnish Moscow’s image in the Arab world.

Iraq’s participation as an observer in the most recent Astana negotiations is also a noteworthy development, as Baghdad has expressed interest in participating in the so-called Astana process since February 2018. In his official statement, Russian Deputy Foreign Minister Mikhail Bogdanov said that Moscow invited Iraq as an observer to bridge disagreements between member states. This comment reflects Iraq’s ambition of acting as a regional mediator, and if Baghdad’s efforts to facilitate Saudi Arabia-Iran dialogue gain traction, Russia could assign Iraq a more substantive arbitration role in Syria.

In addition to expanding its diplomatic cooperation with Syria’s immediate neighbors, Russia is also reaching out to Egypt and the United Arab Emirates (UAE) because they have re-established diplomatic relations with Damascus. Russia views Egypt as a valuable partner in Syria due to President Abdel-Fattah el-Sissi’s long-standing support for Assad and the growing role of Egyptian engineering companies in generating employment in Syria. In late June, an Egyptian-Russian two-plus-two dialogue was held between the Foreign and Defense ministries of both countries, which included discussions on ending the war in Syria. Although the Egyptian Foreign Ministry rejected claims that it was invited to the Astana process in October 2017, Russia hopes to secure Egypt’s participation in future peace talks.

Since the UAE reopened its embassy in Damascus in December 2018, Russian officials have regularly engaged with their Emirati counterparts on conflict resolution in Syria. On Jan. 31, Russian Security Council Secretary Nikolai Patrushev discussed the situation in northeastern Syria with Emirati National Security Advisor Sheikh Tahnoon bin Zayed al-Nahyan, as both Moscow and Abu Dhabi oppose Ankara’s safe zone proposals for this region. Russia also views the UAE as a potentially helpful partner in returning Syria to the Arab League, as Abu Dhabi supports Damascus’s re-engagement with this institution, and hopes that the UAE can help moderate Saudi Arabia’s anti-Assad policies.

As Moscow’s diplomatic outreach to Abu Dhabi on Syria gains momentum, Russia regards the UAE as a potentially critical lifeline for capital investments in Syria’s war-torn economy. In spite of Abu Dhabi’s normalization with Damascus, Moscow could struggle to convince UAE government-owned businesses to invest in the Syrian economy. According to Mohammed Baharoon, the director of Dubai’s B’huth Institute, state-owned entities would need to be assured of Syria’s stability and security before investing in the reconstruction process, but the UAE government does not deter private investors from pursuing opportunities in Syria. In light of these concerns, Russia views the arrival of an Emirati business delegation to Damascus on Aug. 30 with optimism, and hopes that the UAE will resist U.S. pressure to crack down on private investments in Syria.

Under the radar of international media outlets, which remain focused on the areas of alignment and friction within the Russia-Iran-Turkey triumvirate, Russia has greatly expanded its outreach efforts to Arab countries on Syria. Russia also hopes that by increasing Arab participation in the Astana negotiations, European countries like France and Germany, which have engaged in dialogue with Moscow on the Syrian constitutional committee, will eventually participate in the process and soften their opposition to Assad. Although Russia is still a long way from securing Syria’s return to the Arab League and normalizing Assad’s retention of power to the international community, Moscow’s outreach efforts in the Arab world are slowly helping Damascus escape from more than eight years of near-complete regional isolation.

Samuel Ramani is a doctoral candidate at the University of Oxford’s Department of Politics and International Relations. His research focuses on Russian foreign policy toward the Middle East. He can be followed on Twitter@samramani2. The views expressed in this article are his own.