Russia's Energy Diplomacy Should Cause Concern in Washington 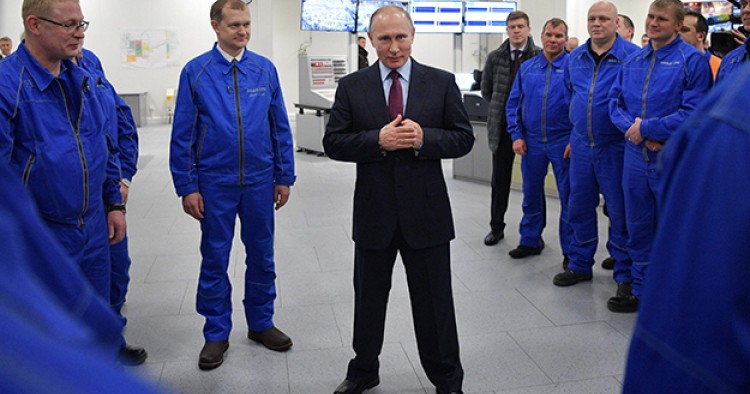 Friction between the United States and Saudi Arabia is unsettling their friends and emboldening their enemies, in particular, Russia.

Saudi public criticism of President Donald Trump’s decision to recognize Jerusalem as Israel’s capital and the State Department’s warning that Saudi Arabia needs to allow humanitarian aid into Yemen are just two of the issues straining ties. A development that has the potential to worsen U.S.-Saudi ties even further is Russia’s growing global energy clout.

President Vladimir Putin recently announced he would run for re-election in 2018. If he wins, which is almost certain, he will be the longest-serving Soviet or Russian leader since Josef Stalin. A Putin victory would mean that Russia’s domestic and foreign politics are likely to remain unchanged.

What it would mean for Russia’s economy is less certain. That economy has been faltering because of sanctions the West imposed on Russia in 2014 for seizing Crimea and supporting the eastern Ukrainian secessionists, and because of a global drop in energy prices.

Although Russian monetary policy has helped generate marginal recovery, Central Bank Governor Elvira Nabiulina has warned that without a major economic overhaul, gross domestic product will grow at less than 2 percent a year, even if oil prices jump to $100 a barrel.

Economic experts inside and outside Russia know that the state budget’s dependence on oil and gas revenues obliges the Kremlin to embrace policies that guarantee maximizing energy income. Because energy constitutes about half of all Russian exports, stabilizing volatile oil prices is one of the important challenges of Kremlin energy diplomacy.

Oil and gas industry dynamics are changing rapidly. Historically, high output in Russia and other producers, plus increasing U.S. shale production, have created a global supply glut. One of the consequences is that the oil production pendulum has been shifting from OPEC to non-OPEC countries.

Plummeting prices have forced oil exporting countries to maximize production, both to increase revenues and protect their market share. Saudi Arabia, the only OPEC swing producer, has abandoned its position of sticking with generous production levels. That policy was aimed at keeping prices low to hammer shale producers, whose costs were higher than traditional producers. But shale producers displayed unexpected resilience by improving their technology and efficiency so they could remain profitable when oil prices were low. This meant that producer volume cuts were inevitable. And with these cuts came shifts in oil exporters’ foreign policy.

As a result, OPEC and non-OPEC exporters, led by Saudi Arabia and Russia, decided on November 30 to extend a volume-cut deal for another nine months. An important lesson from the negotiating process was that Saudi Arabia can no longer single-handedly dictate global oil price policy. The Saudis needed Russian support to achieve the cut they wanted. This development leaves the kingdom vulnerable to the Kremlin’s whims.

Russia’s new oil price leverage also creates international security concerns for Washington. Saudi Arabia has long been one of America's most important Middle East allies. Russia has been trying to rebuild its influence in the region, with notable success in Syria.

Russia continues to pursue a divide and conquer policy in the Middle East. Its military support helped its longtime ally, President Bashar al-Assad, win the Syrian civil war. The Kremlin has also achieved a rapprochement with Qatar and engineered the first-ever visit of a reigning Saudi monarch to Moscow—King Salman’s trip in October. Arms deals with both Gulf countries only strengthened the impression that Russia has become a force to reckon with in the Middle East.

Although the United States has been spreading the word that it is on the verge of energy independence, Russia’s new ability to influence international production cut deals, and thus oil prices, has to be alarming. The United States is indeed less dependent on oil imports and even less dependent on Middle East oil than even a decade ago. But the global nature of energy market continues to expose the U.S. economy to oil and gas price fluctuations.

Both an explosion at a natural gas terminal in Baumgarten, Austria, and China’s decision to slash its coal production roiled energy markets, underscoring how interdependent they are. Washington must ensure that Russia doesn’t outmaneuver it to increase its influence over global energy policy, and thus prices.

This means the United States must keep a close eye on relations between its most important allies in the Gulf and its rival Russia. Gulf countries, especially Saudi Arabia, continue to be among the world’s biggest oil exporters. And American oil companies are still major oil and gas producers in the region. The United States needs to keep lines of communication open with the Saudis and other Middle Eastern oil producers to address security challenges in the region and to maintain its influence in the wider world.