Sectarian Violence and Intolerance in Pakistan 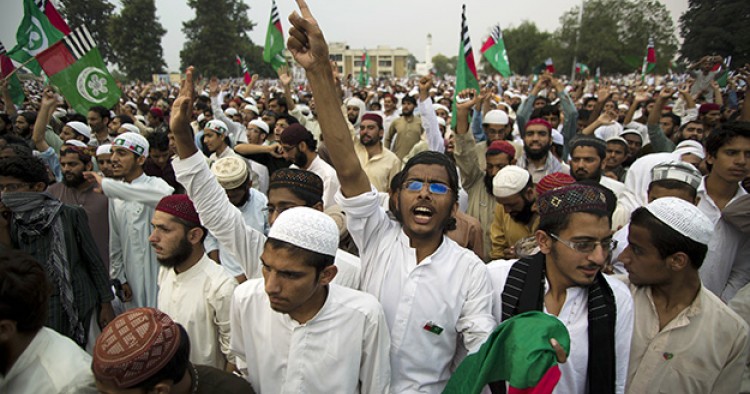 On May 13, more than 40 people were killed and at least 13 injured in a gun attack on a bus carrying members of the minority Ismaili Shi‘i sect in Karachi, Pakistan.[1] This was not the deadliest attack of the year, as that dubious honor goes to a suicide bombing in a district in Sindh, which left 61 Shi‘a dead in January.[2] Yet the brazen nature of the attack―carried out in daylight in the bustling megacity of Karachi by gunmen who reportedly boarded the bus and shot at passengers indiscriminately―was striking even in a country where over 2,000 people have been killed and 3,500 injured in sectarian attacks in the past five years.

The large majority of these victims have been members of the Shi‘i sect of Islam who comprise approximately 15 percent of the country’s population (although precise numbers are unknown). Data from the South Asia Terrorism Portal (SATP),[3] shown in the graph below, demonstrate that there has been an upward trend in the number of individuals killed and injured in sectarian attacks in Pakistan from 1989 to the present. Indeed the number killed and injured annually has not dipped below 500 in the last 12 years, demonstrating a startling level of consistency and indicating the long-running nature of this problem.

What is noteworthy about the sectarian attacks in recent years is that they have become increasingly deadly. In fact, the number of total sectarian incidents has decreased since their high point in the early to mid-1990s (2007, when over 300 incidents were reported, is an exception). The 1990s saw tit-for-tat killings between Sunnis and Shi‘a, often carried out by the extremist Sunni group Sipah-e-Sahaba Pakistan (SSP) and the extremist Shi‘i group Sipah-e-Muhammad Pakistan (SMP). Shi‘i political parties and militant groups alike were formed largely in response to the Islamization policies of General Zia ul-Haq’s government (1977-1988), which favored an orthodox Sunni interpretation of Islam, and they drew moral and material support from the revolution in neighboring Iran. Meanwhile, Saudi Arabia helped finance an elaborate network of religious seminaries (madaris) largely of the Ahle Hadith and Deobandi schools of thought. This led many observers to term the Sunni-Shi‘i conflict in Pakistan during the 1980s and into the 1990s a “proxy way” between Saudi Arabia and Iran.

The more recent attacks, on the other hand, have featured the Shi‘a as overwhelming victims. While members of the Ahle Sunnat Wal Jamaat (ASWJ, formerly the Sipah-e-Sahaba) have been targeted in attacks in Karachi, Islamabad, and elsewhere, large-scale attacks have centered on imambargahs (Shi‘i mosques), Shi‘i neighborhoods, or buses carrying Shi‘a. Shi‘a are, of course, not the only victims. Members of other subsects of Sunni Islam, such as those following the Barelvi school of thought, have also suffered from this violence. Barelvi mosques and madrasas, for example, have been forcibly occupied by the more financially well-off Deobandis.[4] Because these outfits have material and personnel linkages to other terrorist groups, such as the Tehreek-e-Taliban Pakistan (TTP) or al-Qa‘ida, they are often well equipped to employ violence to achieve their objectives.

A second feature of the current crop of sectarian attacks is their geographical spread. The map below, created using the Pakistan Institute of Peace Studies’ online database and conflict map generator, shows that more than half of the districts in Pakistan have experienced at least one sectarian attack since 2001.

As mentioned, the deadliest sectarian attack so far this year was a blast at an imambargah in Shikarpur in interior Sindh. Sindh has long been known for its religious diversity and pluralism; Sufi influences are particularly resonant with a large number of saints and mystics believed to have made their home in this province. In recent years, however, a network of madaris established and run by the ASWJ and its even more militant offshoot, Lashkar-e-Jhangvi (LeJ), has expanded into the province. These madaris are already widespread in southern Punjab, and their influence has now reportedly moved to the bordering districts of northern and central Sindh (including Shikarpur). Sectarianism manifests in different forms as well; for example, the abduction and forced conversion of Hindu girls and attacks on Sufi shrines in Sindh have also begun to garner national attention.[5]

Many have argued that sectarian outfits and clerics associated with sectarian mosques are often able to fill a void left by an absentee state and local elite bent on maintaining inequality. This may particularly be the case in urbanizing districts in the country. For example, Huma Yusuf writes in Foreign Policy, “Poor governance and inadequate social services are contributing to the spread of extremism in the province, as extremist groups fill the political vacuum by providing services such as education and natural disaster relief and rehabilitation.”[6] In my own work, I examine the manner in which the influence of preexisting local power brokers, such as the landed elite, is being challenged by sectarian clerics often associated with the militant organizations listed above.

An increase in sectarian conflict and violence does not necessarily mean that sectarian intolerance is also increasing in society. One could imagine, for example, that violence is perpetrated by a handful of militant organizations that have the capacity to inflict damage at a large scale without ever receiving mass support. Indeed, holding prejudicial opinions about another religious, ethnic, or sectarian group does not automatically suggest that the prejudiced individual will carry out violence against the group, or even condone acts of violence. How political entrepreneurs manipulate and galvanize prejudices is a subject of continuing study. Violence may also serve as the cause, rather than the effect, by altering intergroup relations either positively or negatively. While the link between prejudice and conflict remains undetermined, in this section I briefly examine recent public opinion data that helps shed light on the state of sectarian relations in the Pakistani context of high levels of sectarian violence.

Pakistanis, for the most part, recognize that sectarian relations in the country are fraught. According to 2012 Pew data, 78 percent of Pakistanis surveyed believed relations between Sunnis and Shi‘a are a “moderately big” or “very big” problem.[7] Individuals who were economically less well-off were more likely to believe that sectarianism is a greater problem than those who were more affluent.

Yet in another Pew survey carried out among 1,450 Pakistanis, 35 percent of those who responded said that they did not consider Shi‘a to be Muslims. In fact, a full 50 percent of the Sunnis who chose to respond to the question did not consider Shi‘a to be Muslims. Nearly 64 percent did not believe Ahmadis were Muslim, while only 6 percent said they were. This result was consistent for Shi‘i Muslims and Sunni Muslims alike.[8] Sixty percent believed that there was only one true understanding of Islam. 1,172 of the 1,450 surveyed said that they would not feel comfortable if their son or daughter married a Christian.

A majority―approximately 73 percent―of respondents believed that the controversial blasphemy law is necessary in Pakistan, while only 5 percent believed that it unfairly targets minorities. Perhaps surprisingly, Shi‘i Muslims were significantly more likely than Sunni Muslims to believe so, although the number of individuals identifying as Shi‘a in the sample was small, and this relationship was not robust for models that controlled for education. The blasphemy law has attracted much attention in the last few years, as the potential of its misuse has become violently apparent. Those accused of blasphemy are often subjected to attacks or threats or are killed. For example, in 2012, a teenage Christian boy was accused of sending text messages containing blasphemous content, and his home was attacked by a mob in Karachi. A man arrested in a Qur’an desecration case was beaten to death by a mob that stormed a police station. Other such examples abound.[9] Many believe that allegations of blasphemy are often leveled in order to solve local, petty disputes.

Such examples of mob justice indicate that increasing intolerance in Pakistan is proving deadly. In a 2013 study by the Pew Research Center, Pakistan had the highest possible score on the social hostilities involving religions index, which “measures acts of religious hostility by private individuals, organizations, and social groups. This includes religion-related armed conflict or terrorism, mob or sectarian violence, harassment over attire for religious reasons, and other religion-related intimidation or abuse.”[10] This index thus tries to take into account individual-level hostilities as well attacks by militant organizations.

In addition to giving a general sense of the pervasiveness of intolerant views in Pakistan, such data can help to begin identifying the individual-level predictors for sectarian tolerance in the country. For example, in the Pew data cited above, Shi‘a were more likely to believe that there could be multiple interpretations of Islam, and this was statistically significant at the 5 percent level. Also, more educated Sunnis were significantly more likely to believe that Shi‘a were Muslim and were also significantly more likely to believe that the blasphemy law unfairly targeted minorities. According to a survey carried out by myself and Michael Kalin and outlined in a recent USIP report, Shi‘a were significantly more likely than Sunnis to endorse statements favoring sectarian tolerance. We write, “The generally elevated levels of Shia agreement relative to Sunnis perhaps indicates that Shias’ minority status in Pakistan has made them especially sensitive to both the dangers of intolerance and the benefits of sectarian harmony.”[11] However, we found that while highly educated individuals surveyed in Quetta expressed more tolerant views, this was not the case for respondents in Punjab.

The possibility for future peaceful sectarian relations in Pakistan appears dismal. Violent sectarian groups are expanding their geographical influence in the country and have largely been able to carry out large-scale attacks with insufficient state reprisals. As their power and influence increases at the local level, they become attractive partners for political parties seeking electoral success. Religious seminaries with a sectarian bent are able to propagate anti-Shi‘i (and other) sentiment, perhaps causing an increase in intolerance in the country (although we should be cautious to point to any causal links without conclusive study and data). Sadly, this is an area that deserves urgent and careful examination by academics and policymakers alike.

[8] The results regarding Ahmadis should be read with some caution, because social desirability bias may have caused some respondents to express beliefs that were more in line with the enumerators or considered more acceptable in Pakistan, where the state has declared Ahmadis non-Muslim.