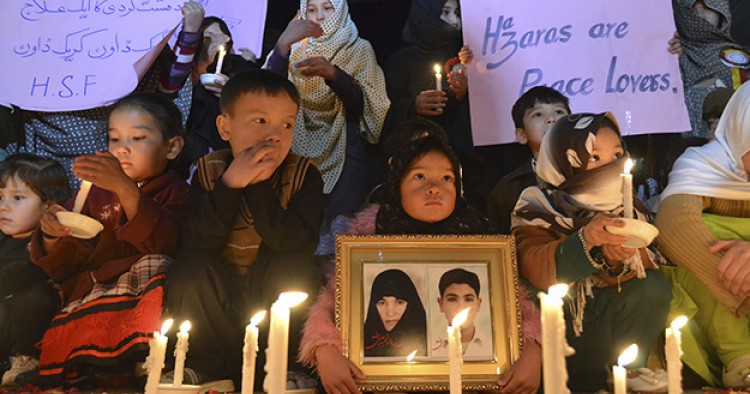 The Shi‘a in Pakistan comprise the second largest population of Shi‘a after Iran, accounting for 10-15 percent of the population, or about 17-26 million people.[1] Since the 1990s, as the Taliban phenomenon gained ascendancy in neighboring Afghanistan, Sunni-Shi‘i conflict in Pakistan has intensified. The Taliban, with their severe Salafi interpretation of the Qur’an, not only shun the Shi‘a, but also push aside the Sunni Hanafi tradition.[2] As the Taliban consolidated power in Afghanistan, northern Balochistan, with its provincial capital Quetta, became part of a security and economic corridor that bound it to the city of Kandahar, which emerged as the headquarters of the Afghan Taliban.

This article surveys and critically evaluates sectarian conflicts and trends in Balochistan during the War on Terror, concentrating primarily on the predominantly Shi‘i Hazara community based in Quetta. Approximately 700,000 Hazaras live in Balochistan, mostly in and around Quetta. Since the late 1990s, the Hazaras have been subjected to an increasing number of attacks from religious armed groups in Pakistan, primarily the Lashkar-e-Jhangvi. In 2013 alone, nearly half of the Shi‘a killed in Pakistan were Hazaras.[3]

Islamization and the Spread of Religious Militancy in Balochistan

Balochistan is the largest province of Pakistan in terms of territory but the smallest in population. Although the province comprises 43 percent of Pakistan’s total land area, it is home to just 4.96 percent of the country’s population.[4] The Baloch and Pashtuns make up 54.76 percent and 29.64 percent, respectively, of the total population of the province, which also includes Brahuis, Sindhis, Punjabis, Hazaras, and Urdu speakers. Most Baloch and Pashtuns in Balochistan are Sunni Muslims; however, among the former, a sect considered heretical to Islam, Zikris, resides in the Makran region.[5]

Growing Islamization in Balochistan goes back to the conscious engendering of the Islamic project as a necessary component of the jihad against the Soviet Union in Afghanistan in the 1980s. Borne mainly out of strategic and tactical compulsions rather than the need for a religious awakening among the Pakistani masses, the jihadi effort was successful in staving off the Russian threat in Afghanistan. However, while the Soviets left Afghanistan, the jihadi groups did not. Their presence within the Afghan sociopolitical fabric became deeply entrenched, bolstered by Pakistan and other regional states, including Saudi Arabia and the United Arab Emirates (UAE), in order to preserve the strategic and territorial status quo in their favor. Thus, jihadi groups came to be used instrumentally for the purpose of strategic gains long after the demise of President Zia ul-Haq and the withdrawal of Soviet forces. In fact, support for jihadi outfits condensed into a bedrock of the Pakistani foreign policy establishment.

Viewed from the perspective of securitized actors within this foreign policy establishment, the policy of aiding non-state actors for strategic gains was successful, as the Taliban consolidated power in Afghanistan. However, lurking beneath the strategic success was an intellectual poverty and a dogma of hatred and contempt bent on denying the existence of the Other through force and violence.

Thus, throughout the 1990s, a sectarian war took shape in Pakistan that was spearheaded by Sunni and Shi‘i militant organizations, including Sipah-e-Sahaba, Lashkar-e-Jhangvi, and Sipah-e-Muhammad. It is important to note that the sectarian war in Pakistan was not merely a localized, isolated dynamic but also correlated with a regional matrix characterized by a futile war of containment that saw Saudi Arabia pitted against Iran. This regional war for power and influence saw both Saudi Arabia and Iran supporting their local religious patrons in Pakistan by channeling money and aid.

While this war was concentrated primarily in Sindh and Punjab Provinces, the onset of the War on Terror provided the impetus for Lashkar-e-Jhangvi to relocate to Quetta, with tragic consequences for the Hazara community.

The Persecution of the Hazaras

Balochistan is home to a 700,000-member Hazara community, predominantly Shi‘i, but also including Barelvis and Isma‘ilis[6] who migrated to Quetta at the end of the nineteenth and early twentieth centuries after facing intense persecution at the hands of the Afghan king, Amir Abdur Rahman Khan. The Hazaras in Quetta took to small, local businesses, including in the trade and transportation sector until the Taliban phenomenon emerged in the 1990s. As targeted attacks against the community gathered pace, the Hazaras organized themselves politically into the Hazara Democratic Party (HDP) in 2004, which, according to party officials, is not exclusively Hazara but also includes Baloch, Pashtuns, Punjabis, and other ethnic groups.[7]

However, both before and after the establishment of the HDP, the Hazara community was targeted by jihadi groups. In July 2003, an attack on a Shi‘i mosque in Quetta left more than 50 people dead―one of the worst incidents of sectarian violence in Balochistan in many years.[8] Similarly, in the first week of March 2004, about four dozen Shi‘a were murdered in Quetta during the tenth Muharram procession. In another major attack in September 2010, the Al Quds rally, organized by the Shi‘a in Quetta to express their solidarity with the Palestinian people, was attacked when a suicide bomber blew himself up, resulting in 55 fatalities.[9] Exactly one year later, gunmen stopped a bus and killed 26 Shi‘i pilgrims traveling through Mastung and onward to Iran.[10]

In January 2013, a deadly attack in a snooker club in a crowded Hazara neighborhood caused the deaths of nearly 90 people. The sordid scenes witnessed on the streets of Quetta were followed by the refusal of victims’ relatives to bury their dead. Sitting in freezing temperatures with coffins at their feet and demanding that the government bring in the military to put an end to the attacks, the families’ actions led to the dismissal of Balochistan’s provincial government and imposition of governor rule.[11] However, Hazaras’ misery did not end there. In February 2013, after governor rule had been imposed and the central government had taken the reins of the provincial government, another targeted suicide attack on the Hazara community killed 79 people. The Hazaras claim that there have been 173 attacks on their community by al-Qa‘ida affiliates, with more than 1,500 Hazaras killed, 4,000 injured, and approximately 100,000 forced to migrate to safer shores.[12]

Lashkar-e-Jhangvi (LeJ) has claimed responsibility for almost all attacks on the Hazaras. LeJ was formed by Riaz Basra, along with Akram Lahori and Malik Ishaq, as a radical offshoot of Sipah-e-Sahaba in 1996.[13] This group aims to transform Pakistan into a Sunni state primarily through violent means and is part of the broader Deobandi movement.[14] It has links with the Harkat-ul-Mujahideen (HuM) and Jaish-e-Muhammad (JeM) as well as with the Taliban and  al-Qa‘ida. It is alleged that the LeJ combined forces with al-Qa‘ida and carried out two bomb attacks on Western targets in Karachi in 2002; one involved the killing of 12 French nationals while the other occurred near the U.S. Consulate.[15] The LeJ has also been connected with the Taliban through prior relationships in Afghanistan, and provided refuge and resources to suspected terrorists after the U.S. invasion in 2001.[16]

The Hazaras have complained, and rightly so, about the Pakistani state’s incapacity to deal with the terrorists. The LeJ was banned by General Pervez Musharraf in 2002. However, the group’s murderous operations have only increased with time, though the state can count some successes, including the killing of the provincial head of the LeJ, Usman Saifullah Kurd, in a military operation in February 2015.[17] Saifullah was considered to be the main planner behind all LeJ operations against the Shi‘a in Balochistan, including the suicide attacks in Quetta as well as the attack on pilgrims.[18]

The Hazaras’ sense of dismay is derived not only from the state’s incapacity to protect them but also from a lack of sympathy and compassion on the part of public figures. In a recent interview, the chief minister of Balochistan implied that Hazaras’ victimhood is in part self-imposed because they do not merge with other groups through marriage, as Baloch and Pashtuns have done with each other.[19] After an attack on a bus carrying Hazara pilgrims to Iran in September 2011, then Chief Minister Aslam Raisani stated, “The population of Balochistan is in millions, 40 dead in Mastung is no big deal. I can send a truckload of tissue papers for them to wipe away their tears.”[20]

Three key steps are necessary if the plight of Hazaras is to be addressed. First, the security apparatus of the Pakistani state needs to crack down on militants bent on tearing apart the social, cultural, and political fabric of Pakistani society. Since the Peshawar school tragedy in December 2014, there has been a more intense state drive against the groups perpetrating these attacks; however, as these operations have included summary executions, they have also invited criticisms from human rights groups.[21] Therefore, a more nuanced approach aimed at eliminating both local and transnational networks that are propagating hate and destruction is needed.

Second, in order for inter-sectarian peace to prevail in Pakistan, it is essential that the proxy war between Iran and Saudi Arabia that is waged in the state via Shi‘i and Sunni groups is controlled and monitored through the active policing of financial assistance to these groups.[22]

Third, increased attention and resources must be devoted to improving the living conditions of the population of Balochistan, especially in light of the fact that the province has the lowest human development index in the entire southern and western Asian region and one of the lowest in the world.[23] It is urgently necessary to create a development strategy that includes all local stakeholders from Balochistan’s myriad ethnic, religious, and sectarian communities, thereby beginning the process of transforming this resource rich yet desperately poor province.

[17] Saifullah had been arrested in 2005 in Karachi and later moved to Quetta, from where he managed to escape from the Anti-Terrorist Force’s high security prison in 2008. Syed Arfeen, “Usman Saifullah Kurd: A Reign of Sectarian Terror,” Geo TV, February 16, 2015, http://www.geo.tv/article-175323-Usman-Saifullah-Kurd-a-reign-of-sectarian-terror.