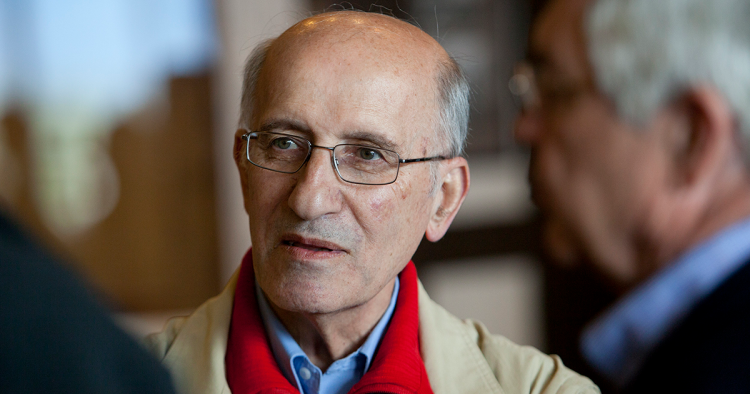 In Iraqi folklore, Saturday is both an ominous and auspicious day. Iraqis say it is Awwad —“repetitive” — and hence they prefer to postpone taking important decisions to other days of the week. For many Iraqis this week, the news of Dr. Sinan al-Shabibi’s unfortunate passing on Saturday, Jan. 8 could not have come on a worse day. While the loss of one of Iraq’s last firmly independent voices, a respected economist and former central bank governor and someone who genuinely sought the country’s economic transformation, was ominous, in time the day may also become auspicious if his memory and legacy help to inspire a new generation of Iraqis to realize his aspirations for the country.

Born in 1941, Dr. Al-Shabibi was the youngest son of Sheikh Mohammed Ridha al-Shabibi, an Iraqi Arab nationalist figure, educator, poet, and politician who served as minister five times and later became president of the Chamber of Deputies from December 1943 to December 1944. In a historic trip crossing the deserts of Arabia, Sheikh al-Shabibi carried letters from prominent Iraqi figures to Sharif Hussein of Hejaz. Those letters paved the way for the country’s independence and the formation of the Hashemite Kingdom of Iraq. Dr. Al-Shabibi’s older brother As'ad al-Shabibi was abducted in 1980 for his anti-Ba’athist political views, never to return to his loved ones.

Fueled by high oil prices, the early-mid 1970s was a relative golden era of economic development in the country. Infrastructure plans drawn up in earlier times, including during the monarchy, could finally be implemented with the windfall of oil revenues that Baghdad enjoyed, especially after the nationalization of the oil industry. From May 1975 to March 1977, Dr. al-Shabibi headed the Imports and Marketing Section at Iraq’s Ministry of Oil as well — one of the few units that preceded the formation of Iraq’s current state oil marketer SOMO. His experiences during these years exposed Dr. al-Shabibi to the inner machinations of Iraqi governance institutions and gave him an early insight into the constantly — some may even say perilously — intertwined relationship between oil and economics in modern Iraq. This wealth of knowledge, in addition to his own indisputable talent, made the British-trained Iraqi economist one of a handful of sought-after authorities for those looking to understand the economy of his troubled homeland in the years to come.

He was eventually forced into exile as Saddam Hussein stoked the fires of what would become the almost decade-long war with neighboring Iran, a conflict that saw incalculable Iraqi souls lost to the whims of a dictator and brought economic ruin upon the country. In December 1980, he began a 20-year-long career at the United Nations Conference on Trade and Development (UNCTAD) in Geneva, the same city where his journey would later end at the age of 80, far away from Baghdad.

During these years of forced exile, Dr. al-Shabibi regularly wrote and spoke about the issues facing the Iraqi economy. At the "The Future of Iraq" conference organized by the Middle East Institute in 1997, his paper "Prospects for the Iraqi Economy: Facing the New Reality" skillfully navigated the country’s failure to fully capitalize on readily available finances during the 1970s and 1980s, its consequences, and the compounded effects of war, conflicts, debt, international sanctions, and inappropriate development strategies and economic policies. Later becoming a UNCTAD publication, it mapped out different scenarios for Iraq’s economic prospects, including one in which if Iraq were to forswear its debt and reparations obligations, it could possibly see economic growth of 5.4-7.4%. This was an unimaginable figure then for a country suffering under a decade of sanctions, but maybe in al-Shabibi’s calculations it was still attainable. A quarter-century later, Iraq’s economy continues to suffer from what he outlined then as signs of “serious weakness and vulnerability.” OPEC’s second-largest producer today is still oil reliant and import dependent and faces ongoing problems with poorly performing state-owned enterprises, as well as years of systematic corruption, mismanagement, and nepotism.

As the drums of war resounded in the lead-up to the U.S. invasion of Iraq, he testified before the Senate Committee on Foreign Relations in August 2002. Balancing his desire to see the dictatorship brought to an end and his concerns over the economy, he urged the U.S. to spare Iraq and its infrastructure destruction as they would be needed to help the country recover from decades of economic and social problems. Foreseeing possible regional resistance to Iraq’s return as a major OPEC oil exporter, he argued that an economically and politically stable Iraq would have favorable repercussions for regional security.

He emphasized that economic stability was a priority to be achieved through raising the external value of the Iraqi dinar, controlling the high inflation rate, and securing a standstill on the payment of debt and reparations. An independent central bank, he believed, was a must. He outlined a post-2003 long-term fiscal policy based on reducing government reliance on oil, encouraging agriculture, and empowering the private sector. After the war, he was a proponent of forming an Iraqi interim government.

At the helm of the central bank

Dr. al-Shabibi’s chance to finally put his words into action came on Sept. 10, 2003, when the Iraqi Governing Council appointed him as the country’s first post-war central bank governor. His eight-year tenure started with ridding Iraqis of a relic of their painful past by replacing the dinar notes featuring Saddam’s portrait. Despite lacking any experience as a central banker, his campaign to bring 21st century financing saw a switch from obsolete typewriters and calculators to computers. He improved relations between the central bank and multilateral institutions like the World Bank and the International Monetary Fund, seeking their support for institutional modernization. His wish to see Iraq’s debts forgiven came to fruition when the central bank became integral in negotiating a deal relieving Iraq of 80% of its pre-2003 debts to the Paris Club, then estimated at $129 billion.

In spite of working in what could only be described as the most politically challenging of countries, he remained professional. He once told Time that the country has “all kinds of instability" but “we can't afford to add economic instability to the mix.” By introducing currency auctions, Dr. al-Shabibi saw the Iraqi dinar stabilize at around 1,200 per U.S. dollar by the end of his tenure, a vast improvement over December 2002’s 2,214 dinars. By the time he left the Central Bank of Iraq in October 2012, inflation had fallen from 76.6% in August 2006 to just 4.8%. Similarly, the country’s foreign exchange reserves increased nearly tenfold from December 2004’s $7 billion to $67.9 billion.

But if anything was a testament to Dr. al-Shabibi’s true caliber, it was his ouster from the central bank. Attempting to assert control over the bank, the government of former Prime Minister Nouri al-Maliki trumped up accusations of currency manipulation and corruption against him — charges that those in economic and financial circles in Iraq found baffling and absurd. For several months, smear campaigns against him were orchestrated on television, prompting 180 Iraqi economists and professionals to petition then-President Jalal Talabani in support of Dr. al-Shabibi.

As the Middle East Economic Survey (MEES) reported at the time, the origin of the conflict stemmed from Mr. al-Maliki’s request of Dr. al-Shabibi two years prior in 2010 to move $5 billion from the central bank’s reserves to the government — a flagrant violation of the central bank’s 2004 law that prohibits direct lending to government. Mr. al-Maliki’s eight-year rule is often criticized for executive branch incursion on independent institutions and the appointment of incapable Da’wa Party loyalists in senior positions. By standing his ground, Dr. al-Shabibi became an icon of institutional independence in the face of mounting political overreach.

For the past 19 years, Iraq’s worst have brought the country to its knees. Iraqis must thus also immortalize the legacy of their best. Months before his removal in 2012, Dr. Sinan al-Shabibi hand-picked the world-renowned Iraqi-British architect Zaha Hadid to design a new building for Iraq’s central bank. At the signing ceremony he said the building would be “a reflection of the determination to rebuild the country.” What we Iraqis need most today is a symbolic gesture that reminds us of that determination. Thus, I call upon Iraq’s deputy prime minister for economic affairs, Dr. Ali Allawi, to name the new central bank building after Dr. al-Shabibi. As it stands proudly as part of Baghdad’s skyline, it will remind us — and generations to come — of two of our best, a dedicated economist and a talented architect.