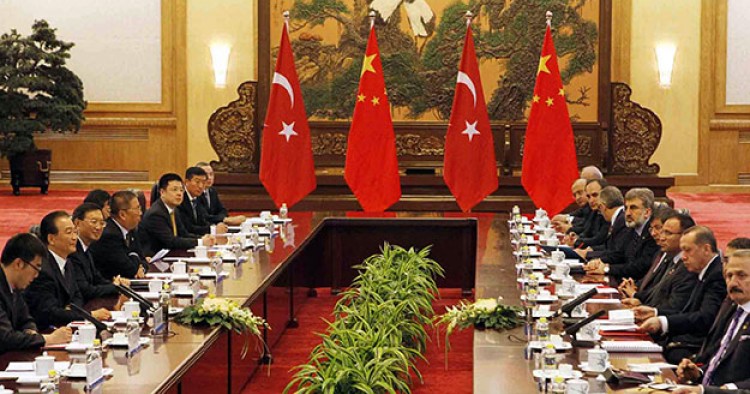 This essay is part of the series Turkey Faces Asia, which explores the development of cultural, political, and economic links between Turkey and the Asia Pacific region. See more ...

The ancestors of the modern day Turks originally lived in and near present-day China. Chinese historical records show that the nomadic peoples of the north, including the Turks, played a significant role in Chinese history.[1] Today, seven Turkic language-speaking ethnic minorities still live in China.[2] After China’s Tang Dynasty (618-906), Turks began to immigrate westward, and by the end of the eleventh century they were settling in what is now modern-day Turkey. During the Ottoman Empire, relations between the two regions continued, with the name for “Ottoman” in Chinese (“Rumi”) appearing several times in historical documents and Ottoman tributary delegations traveling to China, especially during the Ming Dynasty (1368-1644).

After the Industrial Revolution and wave of colonialism, both Ottoman Turkey’s and China’s regional and global power began to wane. During this period Chinese scholars and reformers, including the popular Kang Youwei, became interested in developments taking place in the Ottoman Empire. They looked to it as an example from which China could learn, especially regarding constitutional movements.[3] We also know that after the “Boxer Rebellion,” in which a group known as the Boxers murdered thousands of foreigners in an attempt to rid China of foreign influence, the Ottoman sultan sent a delegation to appeal to Chinese Muslims to not rebel against their government.[4]

After the First World War, both Turkey and China put forth efforts to establish bilateral relations, and a treaty of friendship and commerce was signed in 1934. China subsequently sent an ambassador to Ankara in 1935, and a Turkish ambassador went to China in 1940. However, in 1949, after the establishment of the People’s Republic, Turkey’s embassy moved to Taiwan, and relations between Turkey and mainland China ceased. The Korean War also played an important role in relations between the two countries. Turkey fought on the side of South Korea, and as such Turkey and China confronted each other during the conflict. Relations remained frozen until the Sino-Soviet split of the 1960s, and Turkey, along with other Western countries, recognized the People’s Republic in 1971. Yet the 1970s showed no significant improvements in bilateral relations.

However, after Turkey’s 1980 military coup, President Kenan Evren paid an official visit to China, including Beijing and Shanghai, in 1982 to strengthen relations. It must be noted that a goal of Evren’s visit was to improve Turkey’s economic relations with non-Western countries, as the coup isolated Turkey from the West.[5] Evren famously said, thinking of China’s huge market, “What if we can sell an orange to every Chinese?” The question summarized Turkey’s goal at the time, and it is still relevant.

After the collapse of the Soviet Union and the end of the Cold War, relations between Turkey and China gained new importance. Leader Deng Xiaoping moved China’s economy in a more free market direction after the death of Mao, which made China more important to Turkey in terms of trade and investment. In the 1990s, both sides paid official visits to each other via high level officials, and in the 2000s a turning point came as economic relations between them improved rapidly, to the extent that China became Turkey’s third largest commercial partner. Relations then improved in other realms, such as politics, the military, and culture. In 2010 during the Chinese Premier’s official visit to Turkey, Wen Jiabao and Prime Minister Recep Tayyip Erdoğan declared the advent of their strategic partnership.[6] For Turkey, China is also important as one of the five permanent members of the United Nations, and China is also aware of the importance of Turkey’s geostrategic position. As a member of NATO and the country that “bridges East and West,” Turkey offers a set of advantages to the Chinese in terms of its access to the EU, the Middle East and North Africa, and the Caucasus and Balkans.

Since the West’s economic crisis in 2008, Turkey has been less keen to join the EU, and many Turks have begun to discuss the advantages of being closer to Asia, including China, the pivotal Asian force. China has been Turkey’s third-largest trading partner for ten years now, and this standing even excludes energy imports such as oil and natural gas.[7] While both sides are intent on deepening relations in all aspects, some obstacles must be overcome in the near future, such as the trade deficit between the two countries, which leaves Turkey indebted to the powerhouse that is China to the tune of more than $20 billion annually.

While Turkey should strengthen its relations with China, being part of the West while simultaneously deepening its connections with the People’s Republic may be the best strategy.[8] Though some in Turkey are arguing that the time of Western power is a distant memory, the fact is that the West still holds enormous influence and that universal values and technological and scientific progress is still mainly emerging from the West. In short, the West is still unrivaled by any other potential new super power, including China. For the near future it would thus be wise for Turkey to be a part of the West—that is, a NATO country that has close relations with China.

[1] Many Chinese historical documents detail the military, politics, and culture of the ancient Turks. These sources, such as the Shi Ji, Jiu Tang Shu, and Xin Tang Shu, are considered the oldest records about the history of the Turks.

[4] Mehmet Temel, “Perception of Atatürk’s Reforms by Chinese Intellectuals: Its Reflection on Turkish-Chinese Relations during the First Half of the 20th Century,” Türkiyat Araştırmaları Dergisi 26: 106-107.

[5] Altay Atlı, “Kenan Evren’s Visit to China,” Presentation made at the conference, “Turkey and China at the Crossroads of the Global 21st Century,” 2012, Boğaziçi University, Istanbul.

[8] This does not necessarily mean that Turkey would be a part of the Shanghai Cooperation Organization (SCO) or the EU. Turkey is still in the middle of negotiations for accession to the EU and became a dialogue partner state in the SCO in 2012.