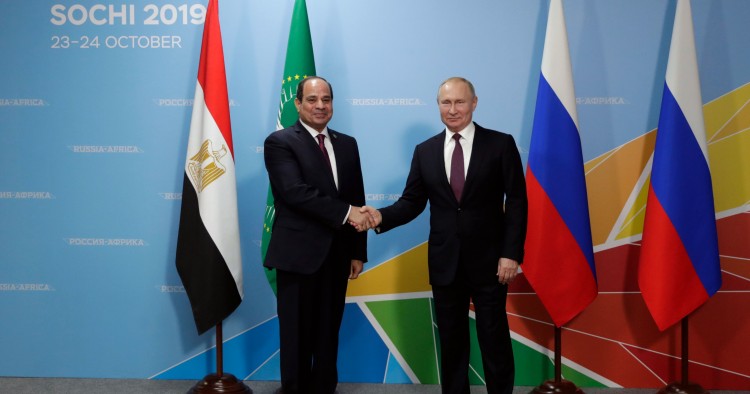 On Oct. 23-24, Russian President Vladimir Putin co-chaired the Russia-Africa Economic Forum in Sochi with his Egyptian counterpart Abdel-Fattah el-Sisi. At the conclusion of the summit, which brought 43 African heads of state to the Black Sea resort town, Sisi emphasized the importance of strengthening Egypt’s partnership with Russia, and Putin described Egypt as a “pillar for security and stability in the Middle East and Africa.”

This conciliatory rhetoric from Putin and Sisi reflects the Russian-Egyptian partnership’s growing strength over the past year, even as Sisi’s cordial relationship with U.S. President Donald Trump has received widespread attention. In October 2018, Egypt signed a strategic partnership agreement with Russia, which Sisi described as a “new chapter in the history of bilateral relations between Moscow and Cairo.” Since this agreement, Russia and Egypt have expanded their ties in the economic, security, and diplomatic spheres. This new cooperation challenges the commonly held view that Cairo sees Russia as a hedge against potential disagreements with the United States, and suggests that the Russia-Egypt partnership has deeper foundations than is often acknowledged in Washington.

Over the past year, Russia’s economic ties with Egypt have expanded in a variety of spheres. From 2017 to 2018, the value of Russian-Egyptian bilateral trade increased by 37 percent and this growth has resulted in a slew of new economic deals. In February, Sisi ratified an Egypt-Russia economic agreement enabling a Russian Industrial Zone to operate in the Suez Canal Economic Zone. In April, Sisi approved the construction of the Dabaa nuclear power plant, which would be developed by Russian state nuclear energy giant Rosatom. This plant could account for up to 50 percent of Egypt’s power generation capacity and help ameliorate economic pressures caused by the country’s rapidly growing demand for energy.

The expansion of Russia-Egypt trade links prompted Putin to announce on Oct. 13 that Russia was trying to create a free trade area including Israel and Egypt that would resemble its trading arrangement with Iran. The economic impact of this free trade zone will likely fall short of Russia’s publicly stated expectations, but it could provide a symbolic boost to the Eurasian Economic Union (EEU), a Russian-led customs union that has struggled with anemic trade volumes.

The expansion of Russia-Egypt security cooperation since both countries’ ratification of a strategic partnership agreement has been equally noteworthy. Russia’s completion of a $1.5 billion deal to sell 20 Su-35 fighter jets to Egypt in March 2019 has gained widespread attention, but the Moscow-Cairo security partnership extends deeper than transactional links. To a degree that is unmatched in the Arab world, Russia is seeking to enhance the interoperability of its military cooperation with Egypt, as both countries aim to combat terrorism and conventional threats.

In October 2018, Egypt hosted joint Defenders of Friendship drills with Russian paratroopers and air force personnel. These drills built on the historic June 2015 Russia-Egypt naval drills in the Mediterranean Sea, and gave Moscow an opportunity to advertise its aircraft and anti-air systems to observer countries, like Saudi Arabia, the United Arab Emirates (UAE), Serbia, and Greece. The Russia-Belarus-Egypt military drills in early September and the Friendship Arrow-1 air defense exercises, which began on Oct. 27, indicate that Russia views enhancing operational-level cooperation with the Egyptian military as an important element of its regional security strategy.

While the crystallization of Russia’s economic and security links with Egypt is a compelling sign of a stronger bilateral partnership, the expansion of Moscow’s coordination with Cairo in the diplomatic sphere is also striking. In June, a Russian-Egyptian two-plus-two summit was held between the foreign and defense ministries of both countries, which included discussions on Syria and Libya. This dialogue reflected the alignment of positions between Russia and Egypt on these crises. Egypt’s willingness to support President Bashar al-Assad as Syria’s least-bad option provides an opening for dialogue with Russia. In addition, Russia and Egypt are both partial to Khalifa Hifter, the head of the self-styled Libyan National Army (LNA), and generally perceived to be supportive of his campaign to wrest control of Tripoli from the UN-backed Government of National Accord (GNA).

Russia also views Egypt’s decision to opt out of U.S. President Trump’s Middle East Strategic Alliance (MESA) proposal as a positive step, as it coincides with Moscow’s efforts to sell its vision for collective security in the Persian Gulf to Arab countries. Russian officials discussed Gulf security with their Egyptian counterparts at the two-plus-two dialogue in June, and Moscow hopes that Cairo’s concerns about maritime security, due its Red Sea trading interests, will eventually prompt it to pursue a course of de-escalation with Iran.

The sustainability of the Russia-Egypt strategic partnership has also been enhanced by cultural and ideational bonds. These links were crystallized during the 2016 Grozny Conference, where religious scholars from both countries expressed their opposition to the Muslim Brotherhood and Salafism. In September, the chairman of the Russian Council of Muftis, Sheikh Ravil Gaynutin, and the head of the Egyptian Awqaf Ministry, Mohammed Mokhtar Gomaa, discussed cooperation on Islamic education at an international conference on Islam in Russia. Russian policymakers hope that exchanges of this kind will establish communal ties between Russia and Egypt’s Muslim communities, which will contribute positively to the bilateral relationship.

Russia’s resolute opposition to popular unrest in the Arab world has further strengthened the cohesion of its partnership with Egypt. After large anti-government demonstrations broke out in Egypt in late September, Russian state media outlets lent immediate support to Sisi’s contention that the Muslim Brotherhood was responsible. By supporting Sisi’s position on the protests, Russia demonstrated its reliability as a partner to Egyptian policymakers, at a time when Egypt’s confidence in U.S. leadership was shaken by Trump’s decision to greenlight Turkey’s Operation Peace Spring campaign in northern Syria.

Although U.S. policymakers routinely question the strength of Russia’s relationship with Egypt, recent events suggest that the Moscow-Cairo strategic partnership might be consolidating in numerous spheres. Russia’s efforts to arbitrate the Egypt-Ethiopia dispute over Nile River access suggest it is possible that African security issues might become a new frontier for bilateral cooperation with Egypt. Collaboration in this area, combined with multiple other areas of interest, indicate that the Russia-Egypt strategic partnership may well strengthen in the months to come.

Samuel Ramani is a doctoral candidate at the University of Oxford’s Department of Politics and International Relations. His research focuses on Russian foreign policy toward the Middle East. He can be followed on Twitter @samramani2. The views expressed in this article are his own.