The Songkok and Raouf Rifai’s Darwiche: A Cultural Dialogue Between the Middle East and Southeast Asia

Raouf Rifai, a doyen of Lebanese and Arab painters, introduced the Darwiche as the point of departure for his art in 2008. Rifai’s Darwiche is a folk character created by the artist and representing the common man (“darwiche” in Arabic means a simple and simple-minded person). Rifai’s common man also encompasses ― through the name the artist chose ― the dervish, or Sufi mystic, thus imbuing a spiritual and physical duality to the character.

Rifai’s Darwiches are many and varied, a cultural icon in the making through the deliberate, obsessive application of the artist over the past six years, an application which doesn’t show any signs of abating. Rifai has painted the Darwiche in many guises, all of which share somecommon characteristics, foremost the fact that they are all rooted in human existence: They have weaknesses and flaws, a myriad of expressions, attitudes and emotions; they are secular and spiritual; they are handsome and ugly; they are stupid yet at the same time wiser than everyone around them; they are full of worries or playful; they cry yet derive humor from everyday tasks. In short, we recognize ourselves in them: they are us. Rifai’s Darwiches are almost always accompanied by a rich array of explicit and implicit Middle Eastern symbols, including a fez (or tarboush), a Damscene sabot, Egyptian peasant dresses and many others. 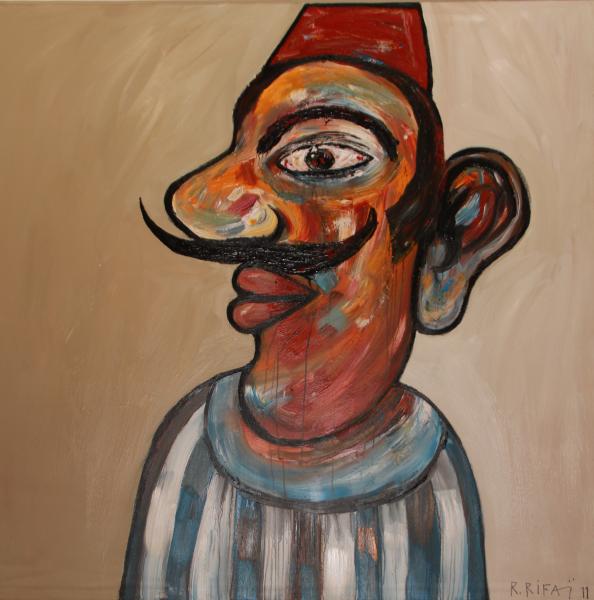 Darwiche also often wears a Songkok, the cap or hat widely worn in Indonesia, Brunei, Malaysia, Singapore, the southern Philippines and southern Thailand, mostly among Muslim nd originating from the Ottoman fez. Often, the Darwiche is represented as a folkloric character such as Juha (better known outside the Arab world as Nasreddin), Abu Zayd al-Hilali (an 11th-century Arab leader featured often in Arab folklore), Abu El Abed (a Lebanese fictional character who is the centrepiece of jokes in Lebanon) and others from the rich history of the Middle East. Darwiche is also portrayed as a common man, a Sheikh, a woman, a drag queen, a Pope. Inspired by Nasreddin, Rifai’s Darwiche wants to be popular across the entire Arab Middle East, and his stories almost invariably take the form of humorous anecdotes. 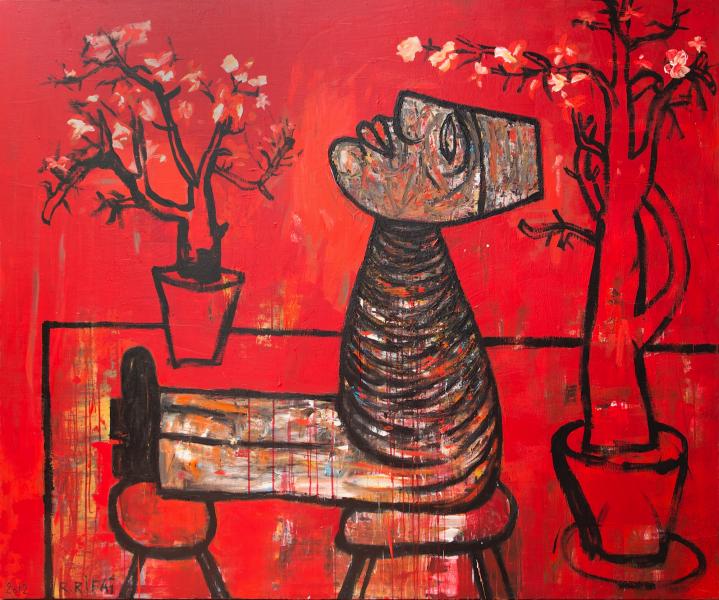 The Darwiche stories told in each painting can be understood at many levels including as a joke, as a morality tale and as a political statement ― and usually deal with timeless concepts, purveying folk wisdom that triumph over all trials and tribulations. Rifai’s body of work is so confident, symbolic and persistent that we feel the Darwiche turning ― in front of our eyes ― into the Middle East ’s Mickey Mouse, Superman, Archie Bunker, Asterix, a cultural icon standing steadfast alongside and against what the artist refers to as “the Mickey Mouse invasion,” i.e. the perception that Western culture is overwhelming Eastern culture. 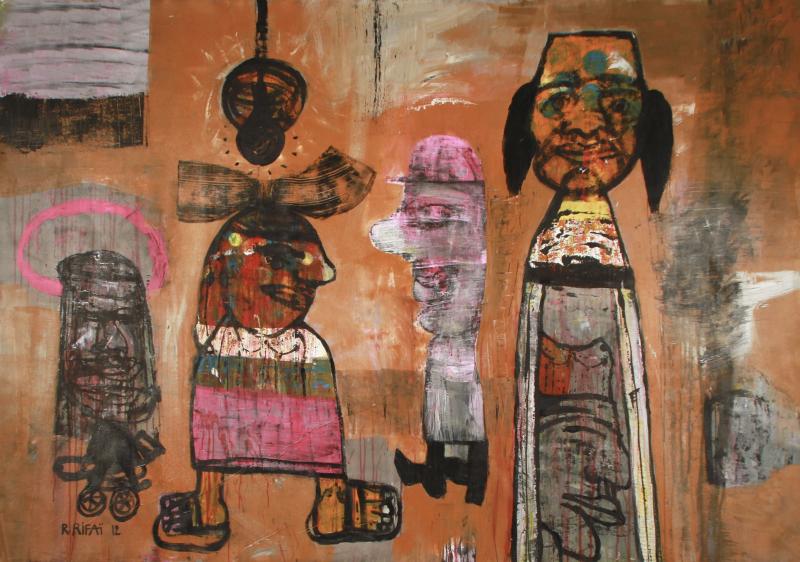 With a strong stylistic wink to the Egyptian style prevalent in the Middle East for several thousands of years (based not on how we see a particular scene but on what we know belongs there), his paintings have an unmistakable Oriental personality though he excels in piling up Middle Eastern symbols which are so well travelled that some of his art could be mistaken for being South East Asian or South Asian. Through the simple device of often illustrating Darwiche wearing a Singkok, or having Asian traits, Rifai’s art seamlessly travels to Southeast Asia and integrates in its cultural scene. Darwich is barging in on Malaysia’s Kampung Boy Lat, Indonesia’s legendary prince Panji, Singapore’s Mr. Kiasu. He wants to be their friend and ally in promoting and protecting local folklore and folkloric wisdom, in a regional cultural front facing up to Mickey Mouse. More broadly, Darwiche is conversing with Southeast Asia, leveraging common cultural roots to highlight how art can transcend the particular and speak to the universal, portraying and negotiating the neuroses of society with wit, depth and passion.