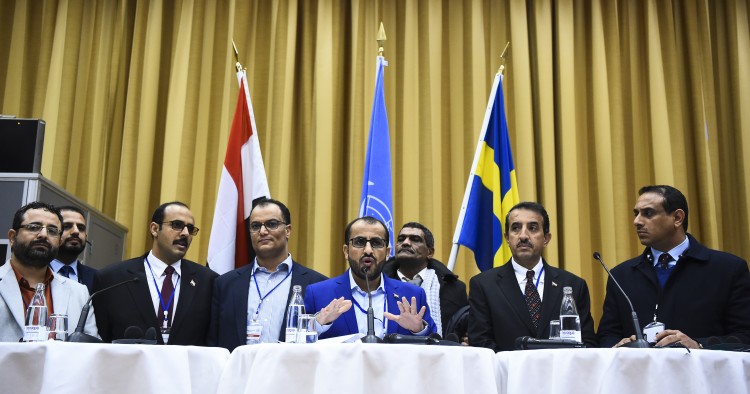 Over the past 14 months, there have been moments when it seemed like progress was being made toward de-escalation in Yemen, with the conclusion of the Stockholm and Riyadh agreements, a considerable reduction in Arab coalition air strikes, the appointment of the third chief of the UN Mission in Support of the Hodeida Agreement, a Houthi de-escalation initiative, the UAE and Sudanese military drawdown, and the recent restart of Saudi-Houthi back-channel negotiations. But there have also been significant setbacks as well, including the armed conflict in Aden, recent fierce clashes in Marib and Jawf governorates, the Houthi attack on a government delegation in Hodeida, unrest in Socotra, renewed Houthi attacks on Saudi infrastructure, and the limited implementation of the Stockholm and Riyadh agreements.

Peace efforts thus far have been largely fragmented and frail, and Yemen may be on the verge of further conflict that would make the prospects for peace even more distant. The UN and Saudi Arabia have adopted a crisis management approach by containing the immediate micro-crises — in Hodeida in 2018 and in Aden in 2019. But this has not addressed the core issue for Yemenis: the need to end the war and build peace nationwide. As the UN, EU, and the signatories of the joint communique continue their efforts, two primary lessons from the past failures of the peace process have become clear.

The need for nationwide peace talks

First, the UN must replace its geographically limited approach with nationwide, inclusive peace talks that resolve the impasse between the primary warring parties and end hostilities on all frontlines. By focusing on just a few governorates, mediators have temporarily limited armed clashes along certain frontlines while ignoring many others. For example, the Stockholm Agreement of December 2018 led to considerable military de-escalation between the Joint Forces and Houthi rebels in Hodeida. However, it failed to, for instance, mitigate armed clashes in August 2019 between the Yemeni government and forces aligned with the Southern Transitional Council (STC) in Aden and other areas, even though unrest had been apparent since at least January 2018, which the Riyadh Agreement later attempted to address in November 2019.

This gradual approach has prolonged an already drawn-out war, frozen the quest for an overarching political settlement, deepened internal fragmentation, and incentivized renewed violence in several governorates. As major confrontations between government-aligned forces and the Houthis continue, and the relationship between the STC and the government remains strained, there is an urgent need to prioritize comprehensive, inclusive, and unconditional peace talks under UN auspices. The voices of formerly sidelined entities must be heard, or else military confrontation will likely expand.

Second, the UN would benefit from working hand in hand with a regional partner and modeling future efforts after the 2011 Gulf Cooperation Council initiative on Yemen, the Omani facilitation of the 2015 Iran nuclear deal, and the 2019 Riyadh Agreement. These all exhibited in-depth expertise, a nuanced understanding of local dynamics, geopolitical sensitivity, and an ability to facilitate comprehensive talks, all of which could increase the potential for the success of UN mediation efforts. Oman has sporadically facilitated talks between the Houthis, Yemeni government, Saudi Arabia, and foreign officials. Kuwait also hosted talks between the Yemeni government and Houthi rebels in 2016, has actively attempted to mediate the Gulf crisis, and reiterated its willingness to host future talks. Therefore, the two countries are relatively credible facilitators that would likely offer valuable technical expertise to the UN beyond hosting talks.

The UN’s current approach in Yemen must change. Since the conflict intensified in March 2015, the UN has brokered six rounds of talks between the Yemeni government and the Houthis in Switzerland, Kuwait, and Sweden, and the results thus far have been disappointing. The first four rounds produced little, the Houthis didn’t even turn up at the fifth round in Geneva in September 2018, and even when the UN was finally able to broker a deal at the sixth round, in Sweden in December 2018, the resulting Stockholm Agreement largely failed to deliver on what it promised. More worryingly, none of these rounds of talks have improved the strained relationship between the Yemeni government and the Houthi rebels.

Comparing the Riyadh and Stockholm negotiations, implementation aside, the Saudi-brokered agreement is much more specific and detailed. The Stockholm process lasted only one week and relied heavily on strategic ambiguity to score a political breakthrough. The informal Saudi talks, by contrast, took nearly two months, working to de-escalate, reduce mistrust, apply the appropriate pressure, and facilitate mutual trade-offs. In sum, the Saudis grasped the sensitivities and nuances of local dynamics, and their comparative success demonstrates the importance of having a regional backer.

Taking all of this into account, there is no doubt that what is needed is a comprehensive peace agreement, immediately and unconditionally, that’s backed by regional actors and a bottom-up peace process. The big hurdle lies in reducing mistrust and building confidence before resuming talks. The reopening of the Sanaa airport to travelers seeking life-saving medical treatment is a step in the right direction in this regard. It is crucial that efforts be made to improve the relationship between the parties before trying to reach compromises on their diverging and incompatible interests and positions. If this is not done, the mistakes that led to the failure of talks in Switzerland and Kuwait, as well as the limited implementation of the Stockholm and Riyadh agreements, will likely reoccur, taking the process backward when it needs to move forward.