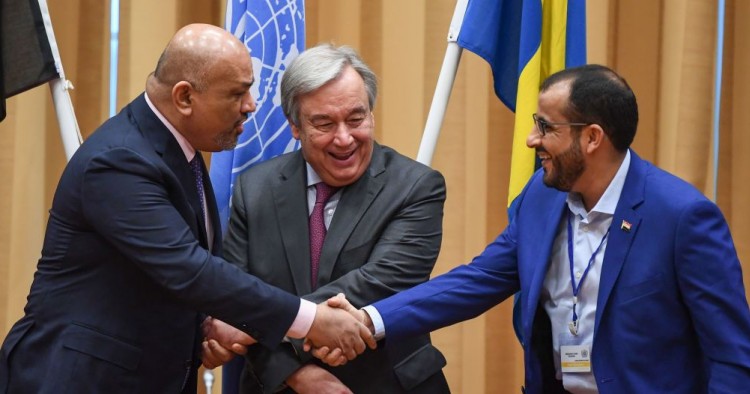 Just over a year ago, the international community rejoiced in the revival of the UN-led Yemen peace process with the conclusion of the Stockholm Agreement between the Yemeni government and the Houthi insurgency (Ansar Allah), brokered by UN Special Envoy Martin Griffiths. Although the deal marked the first political breakthrough in the peace process since the collapse of Geneva and Kuwait talks under Griffith’s predecessor, the ensuing hurdles in implementation meant that hopes for its success were short-lived. In evaluating the progress on the agreement’s three key components — covering prisoner exchange, Hodeida, and Taiz — it quickly becomes clear that the truism that implementing peace agreements is far more important, and difficult, than concluding them still rings true.

In Sweden on Dec. 11, 2018, the Yemeni government and Houthi delegations agreed to swap more than 15,000 prisoners by the 20th of the following month, after having already exchanged lists. The parties not only missed the deadline but failed to realize the overall agreement, although they have each unilaterally released hundreds of prisoners since then, according to the UN. Between April and August 2019, 31 minors were released after being detained in Saudi Arabia; Houthi rebels released 290 detainees in September; Saudi Arabia released 128 Houthi detainees in November; and on New Year’s Day Houthi rebels released another six Saudi detainees. Although these steps have no doubt brought relief to many families, confidence between the stakeholders remains limited, with less than 5 percent of the prisoners included in the agreement released.

Another hurdle is discriminating between the detainees themselves. Thus far, the line between the martial and civil mechanisms has largely been blurred, a matter that stakeholders — civil society, the International Committee of the Red Cross (ICRC), and humanitarian organizations — must settle in coordination with the UN special envoy. Crucial differences exist between prisoners of war, arbitrary detainees, and political hostages, and the Stockholm Agreement has failed to bring about a just process in this regard, leading to violations of international humanitarian and human rights laws.

Absent a foreseeable nationwide political settlement, the UN, ICRC, and other stakeholders should reassess the current mechanism, develop confidence-building measures, and incentivize the prisoner swap processes. As many families consider this deal “the only thing” that will guarantee the release of their loved ones — despite the modest progress made, the complexity involved, and the vast number of prisoners yet to be released — a gradual but limited process of implementation will likely continue in the coming months.

Progress in Hodeida has been minimal and proved to be a stringent test for the UN throughout 2019. Firstly, Griffiths has not managed to deliver the “significant progress” he reported monthly to the UN Security Council over the first half of the year, nor has the so-called cease-fire in the city endured. Last month, a spokesperson for the Joint Forces in Mocha accused the Houthis of committing at least 13,000 violations since the cease-fire went into effect on Dec. 18, 2018, claiming the coalition carried out only limited retaliatory attacks. According to the spokesperson, some 1,567 of the breaches constituted acts of war.

Secondly, the UN aimed at normalizing the status quo by facilitating the redeployment of government and Houthi forces in two phases within 21 days, rather than pressuring the Houthis to withdraw from Hodeida and its three ports as per UN Security Council Resolution 2216 (2015). Failing to accomplish the redeployment of the Joint Forces and Houthi militiamen a year later, as opposed to the 21 days stipulated by the agreement, the Redeployment Coordination Committee (RCC) convened more than seven joint and many one-side meetings to discuss the operational aspects of redeployment. In an attempt to show progress, the UN announced the creation of a joint operations center in September to monitor de-escalation efforts and facilitated the establishment of four joint observation posts in late October, after Abhijit Guha assumed his role as the third head in a year of the UN mission in support of the Hodeida agreement (UNMHA) and chair of the RCC. Although these steps have reduced security incidents in the city by approximately 80 percent, according to Griffiths, they failed to stop the Houthis from targeting a Yemeni government delegation in a missile and drone attack in late November. Around that time, the Houthis also claimed responsibility for a deadly missile attack that left hundreds of coalition forces wounded in Mocha, which falls outside of the scope of the agreement. These figures, when compared to UN statements, show that the UN envoys cherry-pick information to demonstrate success, failing to report developments in a detailed and transparent manner.

Thirdly, two consecutive UNMHA chiefs adopted contradictory policies from one another, thus undermining the UN’s credibility as a third party. For example, in December 2018 former RCC chair Patrick Cammaert released a statement criticizing what became known as the “withdrawal comedy,” in which Houthi forces handed over control of the ports to loyalists within the Coast Guard as well as fellow militiamen wearing Coast Guard uniforms, while several months later, in May 2019, his successor, Michael Lollesgaard, welcomed the move. Inconsistencies like these only deepen existing skepticism of the UN as a useful interlocutor among the Yemeni public.

In addition to these setbacks, the issue of who will secure Hodeida city and its port remains moot. Given the establishment of the joint observation posts, the notion of joint, local peacekeeping forces to stabilize Hodeida might be feasible. Otherwise, there is a possibility of an escalation in the coming months should the UAE-sponsored Joint Forces led by Brigadier-General Tariq Saleh get a green light, or should the Houthis expand their military operations on the west coast, especially given the Yemeni government’s weak position in liberated territories.

Finally, the UN special envoy, in a review of the Stockholm Agreement’s progress, said that the parties had agreed “to deposit the port revenues into a special account in the Central Bank branch in Hodeida under UN supervision.” This appears to be misleading. The Aden-based Central Bank of Yemen, which has replaced that of Sanaa in terms of duties and functions domestically and internationally since 2016, rejects sharing arrangements that undermine the independence and sovereignty of the bank. This means that even though 17 billion Yemeni riyals has been deposited into the UN-monitored account — the proceeds from three months of customs duties on oil derivatives — there is not yet an agreed-upon mechanism in place to pay salaries based on revenues generated from the ports of Hodeida. The UN faces a choice between supporting state building in Yemen or dividing its institutions, like it has divided the peace process in Stockholm.

The expected output of the Taiz understanding was the submission of a report on the joint committee’s “work to the upcoming consultations.” This vague mission has not laid the groundwork for de-escalation efforts compared to that of Hodeida, nor has the UN applied sufficient pressure to lift the siege on Taiz to improve the humanitarian situation and the harsh conditions there. Just before Christmas, a UN team visited Taiz, calling on parties to cooperate in ending the siege. It remains “the deadliest governorate in Yemen,” and has been the most overlooked long before negotiations were held in Sweden.

The Stockholm Agreement achieved far less than what the UN reported and what many Western observers had anticipated. More than 95 percent of listed prisoners remain in detention, the situation in Hodeida has demonstrated how little the UN can achieve, and Taiz remains caught in the middle. The lack of progress has strengthened the status quo across Yemen and set the stage for further fragmentation rather than stabilization. Ironing out this UN-made dilemma will likely be a protracted process until comprehensive peace talks move forward or the parties decide to act differently. If anything is clear, it is that the fate of millions of Yemenis remains at stake and that the UN has failed to learn from the mistakes of the past.

A non-resident scholar at the Middle East Institute, Ibrahim Jalal is a Yemeni security, conflict, and defense researcher based in the UK, an Erasmus Scholar, and a co-founding member of the Security Distillery Think Tank. The views expressed in this article are his own.