Yemen’s peace process: The Hodeida Agreement that never was? 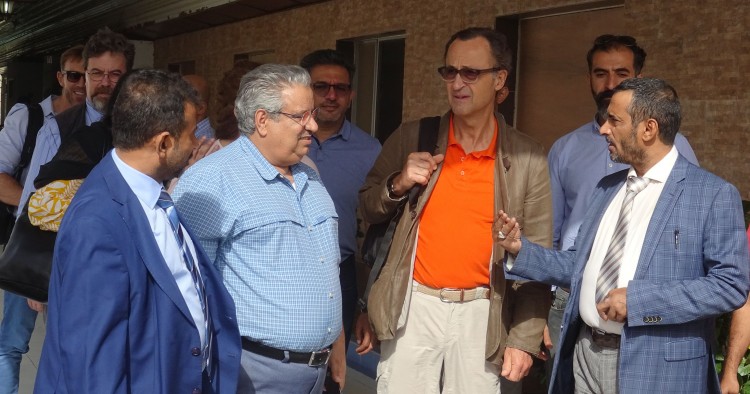 In late July, Lt. Gen. Michael Anker Lollesgaard left Yemen after his six-month term as the second head of the UN Mission in support of the Hodeida Agreement (UNMHA) came to an end. Unlike his predecessor, Maj. Gen. Patrick Cammaert, who departed quietly, Lollesgaard was given a proper sendoff from Sana’a. A senior Houthi commander, Maj. Gen. Ali al-Musheki, even went so far as to describe Lollesgaard as “a conscientious military commander.”

Musheki’s praise was likely the result of appeasement, including UN Special Envoy Martin Griffiths and Lollesgaard’s decision, in May 2019, to endorse what Cammaert, and by extension, the UN had previously decried in an official statement on Dec. 29: a so-called UN verified, unilateral Houthi withdrawal from the three ports of Hodeida — Hodeida, Salif, and Ras Issa. In what became known as the “withdrawal comedy,” Houthi forces handed over control of the ports to Houthi loyalists within the Coast Guard and fellow militiamen wearing Coast Guard uniforms, the latest in a series of uniform changes that has resulted in an official seal of approval from the UN, but widespread local scepticism.

Although the UNMHA’s mandate was recently renewed for another six months, until Jan. 15, 2020, and a third chief of mission, retired Indian Army Lieutenant General Abhijit Guha, has been announced, neither the Hodeida Agreement, nor the hopes of millions of Yemenis have yet to see the light of day.

While Griffiths considers Hodeida “the gateway to the political process” to end Yemen’s four-year war, the agreement’s poor design and the protracted, opaque process of implementation are not a promising basis for a credible peace process and an end to the conflict. This is because the envoy has exploited the humanitarian situation to gain international attention and leverage British lobbying in an effort to normalize the status quo, chipping away at the “Yemen peace process” and shattering the old peace references.

The Hodeida Agreement in brief

On Dec. 13, 2018, the Government of Yemen (GoY) and the Houthis concluded the UN-brokered Stockholm Agreement amid intense British lobbying and American pressure after the Houthis abandoned talks in Geneva in September at the last minute. The Stockholm Agreement has three main parts: The Hodeida Agreement, the Taiz Understanding, and the Prisoners’ Deal. In essence, the Hodeida Agreement strengthened UN-monitored measures, including:

This was immediately supported by two UN Security Council (UNSC) resolutions: S/RES 2451 (2018) and S/RES 2452 (2019). The first endorsed the agreement as a new peace reference, while the second expanded the UN Monitoring Team into a UN Mission (UNMHA). Interestingly, S/RES 2452 surrendered the direct reporting authority of the UNMHA chair to the UN secretary-general by channelling reporting via the envoy, perhaps after Cammaert’s rejection of the December “comedy.” The UNMHA’s mandate is four-fold: leading the RCC (as chair), monitoring compliance, verifying local security forces, and supporting UN work in Hodeida.

The Hodeida (Dis)agreement: A UN-made dilemma

After failing to gather the warring parties in Switzerland, Griffiths switched gears and adopted a new approach of strategic ambiguity — vague provisions open to competing interpretations — in an effort to gain traction and break the cycle of failed talks since his appointment in February 2018. Between December and August, the RCC, and by extension the UNMHA, convened six face-to-face, joint meetings between the GoY and the Houthis to discuss the enduring deadlock over the redeployment of troops.

In a December article in The Washington Post, Peter Salisbury, a British journalist close to UK Ambassador to Yemen Michael Aron, wrote that the Hodeida deal was “meant to prevent the situation in Yemen from getting any worse rather than making it better.” Peter is right in that the intention of the agreement has been to normalize the status quo by preventing a significant change in the balance of power in favor of coalition-backed forces given Hodeida’s importance on economic and security grounds. The ports at Hodeida are essential given that Yemen relies overwhelmingly on imports of food and other key commodities, most of which generate money via taxes and tariffs. In addition, the Houthis have allegedly also used the ports for other purposes, like smuggling military equipment.

The Hodeida Agreement normalized the status quo. First, it specifically froze the battle for Hodeida by replacing the demand for withdrawal with one for the mutual redeployment of troops, which by definition regarded the forces of the last elected authority and militias as equals. Recognizing the military presence of the Houthis in Hodeida, without a military victory or a nationwide settlement, should be taken as a sign of normalization.

Second, as much as the strategic ambiguity used in the agreement has been problematic, it is also increasingly evident that it is part of a broader plan to normalize the role of the Houthis. Whose “local security forces” and “central bank branch” should collect revenues in Hodeida was left unspecified in the agreement and remains unresolved, requiring greater “flexibility” according to Griffiths. If any observer were to step back and look at the chain of events the UN envoy has helped put into motion, however, they would doubtless see a pattern: the normalization of the Houthis.

For example, following the UN-endorsed May “withdrawal comedy,” the envoy’s office immediately held talks on Hodeida’s economic arrangements in Amman (May 14-16) and further suggested opening a private account separate from the Aden-based Central Bank of Yemen (CBY). This rushed action makes clear the normalization effort extends beyond security affairs as well. As discussions on economic and security terms remain unsurprisingly stalemated, the UN could deepen normalization by delaying discussions on “political-level” talks, as indicated in July.

Chipping away at the Yemen peace process

By treating Hodeida and Taiz as two separate issues, the UN envoy has turned the Yemen peace process into a sort of “mix and match” of geography and external influence. But this is no joke: mixing local realities and matching external interests, as was evident in the Aden clashes/coup, is very alarming indeed. Most recently, UK Foreign Secretary Dominic Raab described the fight between the UAE-backed Southern Transitional Council (STC), a non-state actor formed in 2017, and the GoY as a clash between southern and Yemeni government forces.

The Hodeida Agreement cannot be expanded or scaled up to a comprehensive nationwide agreement for the simple reason that it did not and is not meant to contain violence elsewhere. While violence has decreased in Hodeida mainly because coalition-backed forces are restrained and the UAE has recently reduced and redeployed its troops, the Houthis have intensified and incentivized violence in the governorates of Hajjah, Lahij, Dhale, Jawf, and Marib, even as the UN has turned a blind eye.

What’s needed is a broader, not a narrower, geographical perspective. Yemen, the Gulf, and the international community should seek a nationwide peace agreement. The examples of Hodeida and Taiz have incentivised violence on several fronts and proven to be no solution — as many Yemeni analysts predicted in December.

When UNSC resolutions implicitly contradict each other, the message is clear: the old peace references do not work, and it is time to discard them and develop a new one. What Yemeni officials may have overlooked in the Hodeida Agreement is the implications it had for the three previous peace references: the Gulf Cooperation Council (GCC) initiative, the outcomes of the National Dialogue Conference (NDC), and S/RES 2216 (2015). All of these references supported the transitional authority of President Abed Rabbo Mansour Hadi, who succeeded ex-President Ali Abdullah Saleh in 2012, even after the Houthi rebellion.

While UNSC Resolution 2216 explicitly supported President Hadi, endorsed the Arab Coalition, and demanded the Houthis withdraw from all captured cities and disarm unconditionally, the Hodeida Agreement and S/RES 2451 (2019) denied GoY the legitimate right to regain control of Hodeida. Worse, S/RES 2451 and S/RES 2452 hold the GoY accountable for ceasefire violations at the UNSC by imposing on it similar expectations as those governing the Houthis. This means, for example, that if a new campaign to liberate Hodeida were launched, it might be subject to punitive measures.

These developments, compounded by changes in the international agenda on Yemen, the realities on the ground, and the Gulf states’ geostrategic interests (including the UAE’s military drawdown), mean that the resolution to the conflict is likely to be a negotiated settlement in which militias come out victorious — and not what the GoY once desired.

There is no doubt that the state of the Hodeida Agreement reflects that of the peace process more broadly. More than eight months on from the signing of the Hodeida Agreement in Sweden, the situation is worse than when the process started, and there seems little hope of change. If the next UNMHA chair is to accomplish something different, it will require charting a new course and correcting the agenda Griffiths has pursued over the past 18 months.

Ibrahim Jalal is a non-resident scholar at MEI in the Gulf and Yemen Program. The views expressed in this article are his own.